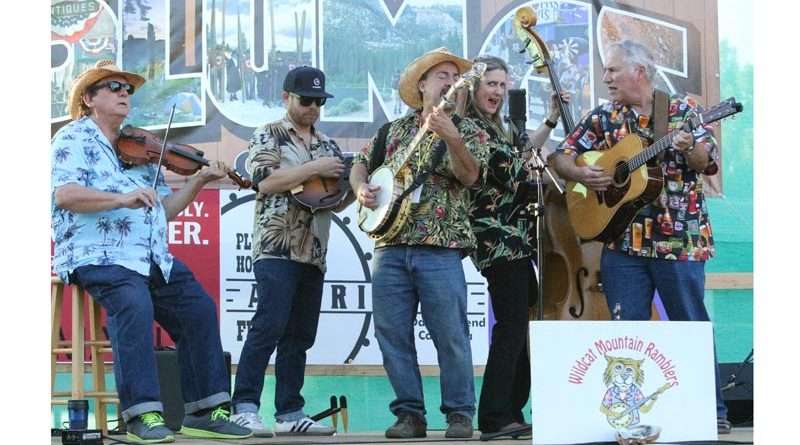 The Wildcat Mountain Ramblers pluck a smile from every face in the audience even though both were exhausted from a very big weekend! The band performed Saturday and Sunday. Photos by Mari Erin Roth
News
September 18, 2019September 17, 2019 Mari Erin Roth, Sports Editor

The lineup for the third annual Americana Festival in Quincy provided a full weekend of upscale musical performances and square dancing. Local performers joined in with out-of-town celebrities over the Labor Day weekend at Plumas-Sierra County Fairgrounds.

The festival is designed to bring outside visitors to town as a boost to the local economy, and so far, the plan is working. The event has grown each of its three years and is becoming a favorite with locals, too.

Other local talents that got in on the lineup include Johnny Walker, Lilah Washburn & the Quincy Pickers and renowned cowboy poet Tony Argento. Lance Barker and members of the Lost Sierra Ramblers did their best to encourage “jamming” by hosting Barky’s Jam-O-Rama all three days of the festival.

A mobile recording studio was on site throughout the event where folks, any folks, could get their licks recorded for all eternity by Bruce Champion.

“Capture, preserve and present live bluegrass music,” said Champion. After recording, mixing and mastering the recordings, the process was finalized by producing “ready for sale” CDs for the entertainers complete with Americana logo covers.

Positive comments were heard all around during the closing day after a weekend filled with fun. Square dancers filled local motels and many brought RVs to camp at the fairgrounds. Restaurants saw the swell in business and the line for Polka Dot was long all weekend long.

“Make sure you set aside Labor Day Weekend for the next 20 or 30 years,” said Steffanic in the program. “Tell your friends they have to come and see Plumas County AND be part of the best darn Americana Festival in the West!”