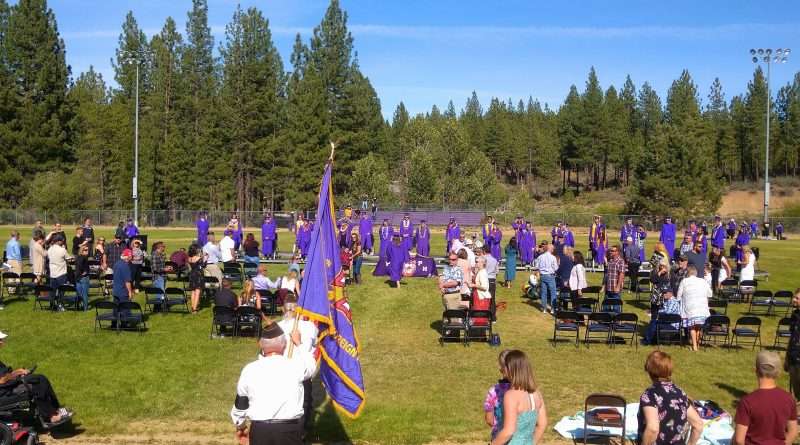 Maria Popish gives a lovely rendition of the National Anthem at the Portola High School Class of 2021 graduation ceremony, followed by a flag salute and Pledge of Allegiance led by the Veterans of Foreign Wars Post-High Sierra 3758. Photos by Ian Hoffmann
News
June 12, 2021June 17, 2021 Editor

Portola Junior/Senior High School held a graduation ceremony for the class of 2021 on Friday, June 11 at the Bob Wise Memorial Stadium on a warm summer evening.

After the processional, Maria Popish gave a lovely rendition of the National Anthem, followed by a flag salute and Pledge of Allegiance led by the Veterans of Foreign Wars Post-High Sierra 3758.

Sophie Ward gave a warm welcome to all gathered for the ceremony, noting her pride in each of the 34 graduating student there that evening.

This was followed by a similar speech in Spanish by graduate Gustavo Casillas Avalos, who also thanked all the teachers, staff, and family who had brought them to that moment.

Three graduates joined the Portola High School band for a final group rendition of the Portola fight song, accompanied by cheers from friends and family members in attendance.

Salutatorian Emery Hart spoke next, starting with a heartfelt thanks to all of the many people that supported her and the other graduates in their journey to graduation.

“Today we are here to celebrate the ending of a season, and a departure into a new one,” Hart said with a smile at all her classmates, dressed in Portola purple caps and gowns. “Both the positive and the negative experiences of this past year have brought us to this final mile in this journey. We wouldn’t be here without the many people who invested a large part of their lives into us, their students.”

Hart said that she profoundly hoped that all of the graduates would be able to cultivate the seeds that their teachers had planted in them, as well as thanking the graduates’ families, which are “the rock on which we stand.”

Last but not least, Hart thanked her peers, with so many of the graduates having grown up together and gone through a 14-year school career together as well. “Our destination is unknown, which is scary but invigorating!” Hart concluded. “Mahalo!”

Valedictorian Olivia Fragiacomo came up to the podium, opening with her gratitude at being able to be there at that moment, healthy and happy. “We stand on the precipice of our future,” Fragiacomo said, smiling out at the many proud faces in the audience.

She went on to note that she and her class definitely did not anticipate spending their senior year largely learning from home, during a pandemic, but said despite it all, “We made it! Portola High School will always be in our hearts, but now we have the opportunity to pursue bigger dreams; to take on the world and make a positive impact!”

Fragiacomo looked towards the Class of 2021 and said, “I’m excited to see how all of you will make an impact on the world in ways big or small. I am so proud of each and every one of you.”

She parted with the thought that the graduation ceremony was three things- a celebration, a farewell, and a beginning.

Keynote Speaker Dan Smith taught at Portola High for a year in the past, enriching student knowledge around anatomy, fire science, and physical education. Graduate Jackson Dias introduced him with a grin, saying, “He made a really good first impression on us!”

Smith started by noting that it was so easy to find positive things about the group of graduates and encouraged all of the young adults not to squander all of their potential. “Don’t squander it! Keep the ball rolling!” Smith urged. “You’ve got a great head start.”

Smith went on to give three simple tips to the students as they closed the final chapter of their high school careers.

“Number one, shoes and clothing are the minimum to riding a skateboard,” he said, laughing with the graduates. “Two, I want everyone to remember that when I was teaching here, before every class, I would greet each of you and tell you that I believed in you, and that’s because I truly do. That still holds true, and it is a powerful thing to have someone truly believe in you, so take that and roll with it in your heart.”

Third, Smith concluded that once the graduates went out into the world, they would need to know their value. “When you leave, people like me are going to chew you up and spit you out, and so you truly have to always know your own value,” Smith said.

After a round of applause, graduates Micaela Coronado and Dominic Bautista took turns giving the farewell speech in both English and Spanish, sharing that all of the graduates had reminisced heavily over the last four years, and while much of it was unusual due to the pandemic, the students chose to use their time left together to make as many memories as possible. “We will use the memories of what we’ve created together to move forward,” Coronado said. “Thank you, Class of 2021, and good luck in the next chapter of your lives!”

All students cheered together as they officially became graduates, caps thrown to the sky, before the ceremony concluded with cheers echoing from the stands. Congratulations, Portola High School Class of 2021! You did it!