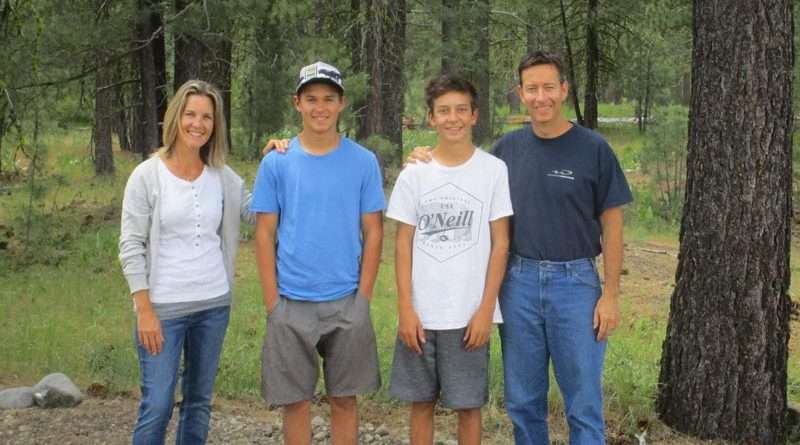 The Church family, from left: mom Dana, brothers Paxton and Cannon, and dad Matt stand in front of the two-plus acre plot the ARPD board has earmarked for the future skate board park the family has been working to bring to Chester. This future site is located adjacent to the ARPD parking lot on Meadowbrook Loop. The family welcomes anyone to help with the project. Photo by Gregg Scott
News
July 4, 2018June 28, 2018 Gregg Scott, Staff Writer

There is a group of Lake Almanor residents trying to organize the construction of a skateboard park in Chester.

The idea originated as the Church family was talking one evening about what the two brothers, Cannon and Paxton Church, would like to do.

Both of the boys like to skateboard, but they have to travel if they want to test their skills in a skate park designed to accommodate different skill levels and offer a choice of challenges.

The boys’ parents, Matt and Dana Church, agreed that it would be a great endeavor for the boys to reach out to the community for support to organize and build a skate park in Chester.

After talking with neighbors, friends, schoolmates and community organizations, they began a petition drive in order to evaluate the community’s support.

With an estimated 150 signatures, they approached the Almanor Recreation and Park District (ARPD) on March 12 with the basic concept as a means to acquire the necessary land for the project.

The board liked the idea and agreed to set aside the 2.5-acre parcel across from its office building for the project pending funding that should be based on a detailed design plan that would include final dimensions, and all design and construction costs.

The ARPD board advised the boys that it is usually easier to seek funding for a known and viewable project than just a concept.

After more research and additional conversations with community members, the Church family returned to the ARPD on June 19 with more facts, figures and ideas.

One of the main concerns appears to be the current cost of building a skate park. The cost can vary widely depending on the amenities included, but an industry average is somewhere around $40 per square foot for a reasonable facility.

That would make the cost of the original 5,000-square-foot park the boys had envisioned around $200,000.

The board explained that a smaller — 3,000-square-foot — park might be a better goal.

They also raised the possibility of applying for a Tony Hawk Grant.

Hawk is an internationally known skateboarder whose foundation offers grants for projects like this. The grants are usually in the $5,000 to $20,000 range, but do have certain prerequisites that need to be met that require having 30 percent of the estimated construction costs raised prior to application for the grant. The grant also requires the park have 24/7 access by the public.

The board suggested that a pump-track be considered as an interim alternative because they are much easier to build and less costly.

A pump track is simply an off-road terrain park for bicycles that includes banked turns and jumps that are completed by “pumping” through the course.

ARPD President Colleen Garrett thought the pump track idea might also show the community that there is progress being made toward the ultimate goal of a skate park in Chester.

The brothers are open to the idea of adding a pump track to the project, but explained it would be used by a different set of clientele and the skateboard park they envisioned would be preferable.

The board did agree to set up a separate account under the district’s nonprofit status to receive funds for the skate park.

The Church family, ARPD and other supporters understand that the development of a skate park in Chester is going to be a long-term process and may take anywhere from one to three, or more, years depending on local support and funds.

Supporters are planning several fundraising events and are working to advertise the project.

If interested in donating to the skate park project, visit chesterskatepark.com, scroll to the bottom and click on the “Go Fund Me” link.

2 thoughts on “Proposed skate park is a family affair”