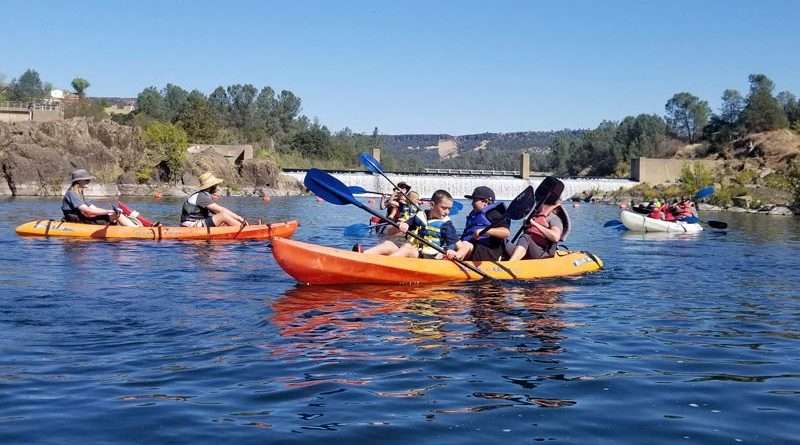 Kayaking was on the menu when PUSD fourth-grade students started their “Year of the Fish” science lessons about salmon runs and changes to the Feather River. Photo submitted
News
October 30, 2019November 5, 2019 Roni Java, Staff Writer

Plumas Unified School District’s fourth-graders recently found plenty of science adventures while running with the salmon for their Outdoor Core “Year of the Fish” studies this fall.

PUSD Outdoor Education Program Coordinator and Trainer Rob Wade oversees the K-12 Next Generation Science Standards for the school district. He conducts distinctive environmental education and stewardship programs for Plumas County students from kindergarten through 12th grade with the aid of generous partners and organizations such as the Feather River Land Trust, Plumas Corporation, Plumas National Forest, Feather River College and others.

Wade reports that fourth-grade students countywide completed their “Salmon Run” kayak trips in October, including a fascinating visit to the Feather River Fish Hatchery in Oroville.

“Our kids are studying the history of the Feather River and changes that were made to the river that affect fish, too,” Wade explained. “It was powerful to be right next to those mighty Chinook and realize that they used to come home to our stretch of the Upper Feather River. The next field trip will look at the tradeoff of fish for power in the Feather River Canyon.”

The hatchery, operated by the California Department of Fish and Wildlife, raises Chinook salmon and steelhead along the Feather River, just below Lake Oroville.

According to CDFW, an underwater viewing window displays migrating salmon or steelhead during the approximate dates of mid-September through June. The department also notes that visitors can enjoy their time at the Feather River Hatchery any time of year “and great fishing is available on Lake Oroville and several nearby rivers.”