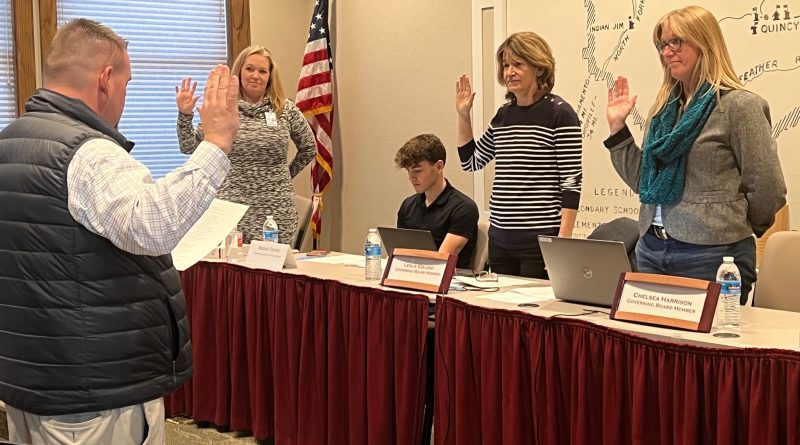 Superintendent Bill Roderick started off the meeting by administering the oath of office to school board members JoDee Read, Leslie Edlund and Chelsea Harrison. Read ran unopposed in her bid for another term on the board, and Edlund prevailed over her challenger to retain her seat on the board. Chelsea Harrison was appointed to the board when no one from the Almanor trustee area ran for the position.

Once the trustees were sworn in, it was time to elect a new president. Traci Holt, who had been the board president, did not seek another term in office. JoDee Read nominated Dave Keller for the position and that nomination was approved unanimously by his peers. (Joleen Cline, who represents the Portola trustee area, was absent.) In her absence, the board voted for Cline to serve another year as board clerk.

With a new board and leadership seated, the first order of business was to set the meeting calendar for next year. Board meetings will continue to be on the second Wednesday of each month at 4 p.m., with the exception of spring break and June.

School board meetings rotate through Chester, Greenville, Portola and Quincy. At each meeting the principals of the elementary and junior-senior high schools in that area select a student for special recognition. During the Dec. 14 meeting, Quincy Elementary School Principal Lara Hollister presented the award to sixth-grader Vayden Flores, with his parents in attendance. Hollister said his peers and his teachers were unanimous in their support for him. “Things have not been easy for him and he’s overcome a lot of obstacles and is an inspiration for all of us,” Hollister said.

Quincy High School Principal Jennifer Scheel presented her award to 11th-grader Brody Nunez who she said “performs academically and on the field.” Brody’s family was in the audience as he accepted the award and then shook hands with each of the school board trustees.

A student also is selected to be a representative to the school board for each community. Quincy High School senior Michael Oravetz was selected for that opportunity and took the oath of office. He provided an update on QHS happenings and took his seat at the board table. Though student representatives don’t vote, they do have the opportunity to voice opinions.

After discussing the two options that were developed from the responses, the school board members voted unanimously to accept the option that makes Monday, Aug. 28, 2023 the first day of school, with a four-day holiday weekend in February, rather than the week-long break and earlier start date provided by the other option. The last day of the school year will be June 14, 2024. In making the decision, the trustees said they were relying on input from families, who preferred the Aug. 28 start date and a briefer holiday. They acknowledged the difficult in securing child care during a longer February break, and Edlund worried that a week-long break so soon after the two-week Christmas break would be disruptive to education. Trustee Harrison, whose son attends Chester High School, said that as a parent she preferred the Aug. 28 start date and briefer February break.

Also of note, the early release day will revert back to Friday, rather than Monday, as it is this school year.

Following a closed session it was reported that the board approved the bargaining agreements that had been reached with its classified, certificated and management staff that consisted of a 9 percent pay increase retroactive to July 1, 2022 and an additional 4 percent effective July 1, 2023. During a comment before the closed session, Roderick said it was important to the district that the same salary increase be offered across the board to its employees.

The board also accepted the donation of a property at 336 Bush St. in Greenville, which is adjacent to the elementary school’s kindergarten playground. Roderick said that the acceptance is contingent upon the property (which burned during the Dixie Fire) being clear of all hazardous materials. While there are no firm plans for the property at this time, Roderick said the district would put it to good use.

This was the first meeting following the resignation of Lisa Cavin, the district’s deputy superintendent/business services.  Mallory Marin and Casey Harding presented information for the county office of education and the school district respectively. In her presentation Marin thanked Cavin for preparing the information. She said that all Plumas County Office of Education schools received a positive certification – meaning the county office will be able to meet its financial obligations for the remainder of this fiscal year and the subsequent two fiscal years. She said that key considerations for the county office are vacancies and one-time funds.

On the PUSD side, Harding said that one-time revenue tied to COVID is a key consideration. In future years, the district needs to be cognizant of enrollment and economic uncertainty,  among other considerations. He predicts that the reserve could fall below 10 percent. The PUSD policy is to maintain 17 percent, while the state is at 3 percent.

“We are in a good spot,” Roderick said following the presentations.