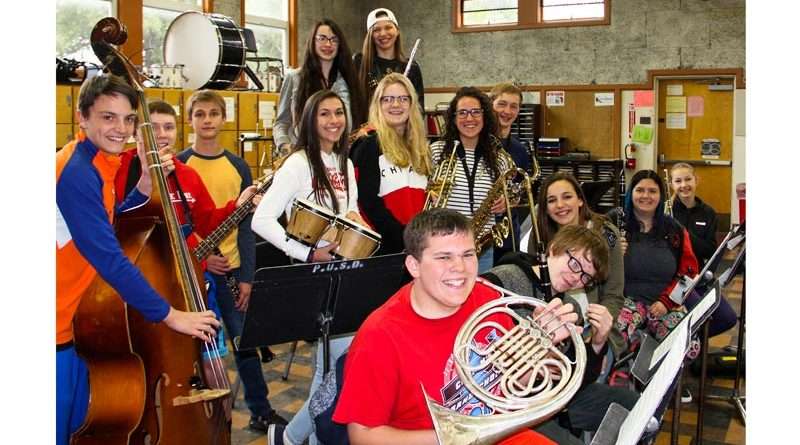 Tristan McMichael is a man on a mission. He is passionate about the value of the Plumas Unified School District’s music education program and he hopes to convince the school board to increase support for music from the early grades up into high school.

He has his work cut out for him.

But first, he’d settle for elementary school students having better music-class time slots in which to study and build their competencies.

And the Quincy Junior-Senior High School freshman would also be really happy to see more class scheduling options for seventh- through twelfth-graders so they can attend a music class without having to forego other, equally important course offerings — like a foreign language, AP history and others.

An avid musician, McMichael is working to make school district leaders aware of accumulated changes to the music education program in Quincy schools that he feels are detrimental.

“I originally joined band to see what it was like. Once I did, I found that it’s a lot of fun,” McMichael said recently. “I love music because no other class has you working together with other people like band does. But music in our schools has been torn apart in the last few decades. I’m trying to rebuild our program and prevent it from completely collapsing.”

Interviewed after he took a delegation of supporters to speak before the PUSD School Board on behalf of improved support for K-12 music education, McMichael explained that a successful music program creates “ladders” of opportunity from kindergarten through high school.

After that, it’s beginning band, advanced band and then on to junior high and high school band opportunities.

It’s hard to get the necessary time with a teacher and time to learn or practice when music education is as infrequent as half an hour a week for elementary students, McMichael suggests.

And he isn’t alone in his quest to save and improve local music education.

Trained as a K-12 music teacher, Luke Barnes has been leading the QHS band for five years. His students perform as a concert band and play jazz, pop and pretty much any kind of ensemble pieces.

“There’s a lot of research out there about the many benefits of a music education,” Barnes said during an early morning rehearsal of the QHS concert band. “The challenges of the students’ schedules, that’s the issue — not the interest of the kids. There’s no one final solution.”

But McMichael worries greatly about the future of school music in Plumas County and potential impacts down the road with fewer college scholarships available due to a dwindling supply of dedicated, talented student musicians out of Quincy, in particular.

“I’ve grown to love music and I want to go to college to be a music teacher,” McMichael said, adding that

Quincy music studies enrollment has been declining for a range of reasons at both the elementary and secondary schools and this is impacting the future of school music programs in general.

He noted that within the last four years, Quincy has lost its elementary school choir, the high school choir and the jazz band.

The third-grade recorder program is suffering, he said, and the beginning and advanced band program for elementary students needs more support, too.

“I have run fundraisers and an instrument drive to make more instruments available to students so that cost isn’t a barrier for those who want to join music,” McMichael commented. “However, after I did that, the schools put elementary band (early in the morning) before school for the second time and our numbers started to drop again.”

McMichael maintains that, “Many high school band kids and parents who went through the same time change, saw the negative affects. Our numbers at the elementary school are extremely low. The high school has talked about getting rid of our junior high band if we have less than 10 members next year. The school uses our music teacher more for computer classes than music. That is why we went to the district office to speak at the board meeting. When the numbers started to drop — and no help came from the administration — I had to step in.”

An impassioned letter of support from Johnene McDonald accompanied McMichael and several music boosters to the school board meeting in late March.

Her letter detailed 35 years of support for local music education and the development of a 30-piece community orchestra, all through the work of McDonald’s Face the Music Studio.

“I have watched nine music teachers come and go at Quincy High School,” McDonald wrote. “All of those teachers were amazing music teachers and they came here trying to do a good job for the kids. They all left over similar issues, which came down to having their music classes chopped in half and being expected to teach other subjects instead of music.”

McDonald added that “cutbacks” in all of Quincy’s music classes are creating “fewer and fewer young musicians who are accomplished enough to play at the community orchestra level.”

She explained that many of her best students have studied music even before kindergarten and “children need to take music lessons early enough in life to develop the technique needed to perform in beginning or advanced band, in junior and senior high, and with a community orchestra.”

McDonald wrote, “I fear if we lose another good music teacher, the music program may never be revived. What a horrible loss to our community and our young people.”

The school board members took the matter under serious consideration, acknowledging the district values music as a critical learning tool that keeps students engaged in school.

Music, as part of PUSD’s Visual and Performing Arts programs, also helps to develop well-rounded individuals, the trustees agreed, and encourages skills they believe are vital for success in the 21st century.

McMichael’s campaign to raise awareness of students’ and schools’ music-class needs elicited a promise to discuss the vision of PUSD music programs and support for students.

Trustee Dwight Pierson thanked McMichael, parents and other students for coming before the board.

“We certainly have phenomenal talent in this community,” Pierson said. “I was in both athletics and band myself. At halftime, we took off our shoulder pads and marched in the school band. I can’t tell you which I enjoyed more.”

Pierson acknowledged the school board has been “struggling with these legitimate questions that have been raised about the future of our music education program.”

Fellow trustees on the board concurred that they would like to see school schedules be able to provide class options that conflict as little as possible with music classes, as well as other courses that make it hard for students to take the things that strongly interest them — and still complete requirements, etc.

Trustee Dave Keller said, “I’d like to see the schools make this a priority.”

Trustees Jolene Cline and Leslie Edlund, president of the board, talked about what kinds of options are available, within the structure of a school day.

Concerns were raised about moving music, or other important course offerings, to before or after school hours due to transportation issues.

Trustee Traci Holt, clerk of the board, said she had spent time recently with one of her local principals to go over master schedule planning.

“My head was spinning,” Holt said. “We ran into limitations and issues about when classes can be offered. I feel their pain. How do we find a happy medium?”

Pierson and Edlund acknowledged that (taking music and other desirable classes) had “worked in the past, it’s been done.”

The trustees also said they understood all teachers will be protective of their own programs and many things are important, such as the need to learn a foreign language, take AP classes for college success, participate in sports and much more.

“We are limited because of the size of our district and we have all these competing needs,” Pierson commented. “This is worth exploring district wide — ways we can support these programs. We shouldn’t put kids in a position where they only have tough choices, like it’s music OR sports, but not both.”

Trustee Holt suggested the district needs to be prepared “to put some resources toward” resolving more support for the music and performing arts programs.

Edlund agreed, and at the elementary level, too. For the upper grades, she considered possibly offering band on two days and AP studies on the others.

All of the school board members agreed, with gratitude, that Quincy and Plumas County in general provide welcome support for the schools and various educational programs, saying they want to demonstrate commitment for the program needs, too.

Board President Edlund said, “Our music program is small now; regaining robustness is going to take some time. It will take some rebuilding.”

PUSD Superintendent Terry Oestreich told the board she and her leadership team would talk about what some solutions might look like.

Trustee Pierson commented, “We empathize with the challenges. There are so many things we have to address (throughout the district), a lot of things are on our plate. Perhaps we need to look at what we can take off the plate.”

Oestreich appreciated the board’s understanding and said she would work with the school principals “about offering opportunities.”