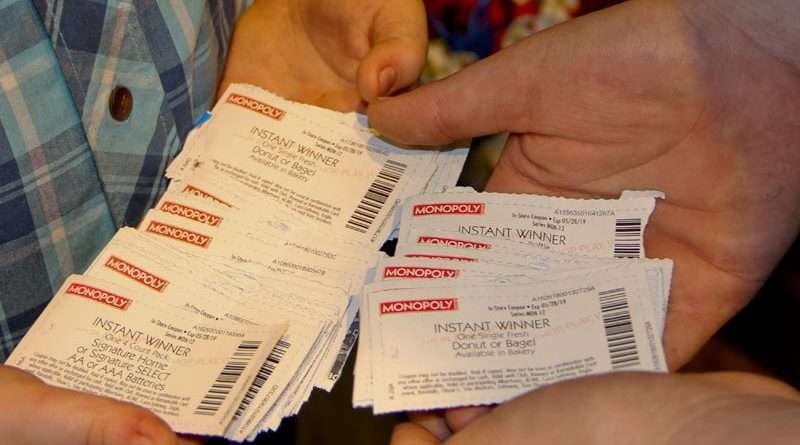 The boys collected over 2,000 Safeway Monopoly game pieces for their food pantry donation project. People from all over the county, including customers and employees from US BANK and the Exxon Mobile station in Quincy, donated tickets.
News
June 4, 2019May 30, 2019 Roni Java, Staff Writer

“We saw a program about Ethiopia and it really affected the boys,” said Barbara Gonzales of Meadow Valley as her grandsons waited patiently at the Quincy Safeway on May 22 to redeem two fistfuls of Monopoly game tickets for free food.

Tysen McGirr, 13, a freshman at Quincy Junior-Senior High School, and his little brother, Skylar Dillard, an 8-year-old Plumas Charter School student, undertook a unique volunteer project because they noticed something ordinary that struck them as strange.

“We saw people throwing away their Safeway Monopoly game tickets,” Tysen said. “We knew people are going hungry around the world and even here in our town. We figured people didn’t know there are many tickets for free food in this game.”

So Tysen and Skylar asked their grandma and their mother, Trista McGirr, for help to collect unused game pieces. Even mom and grandma had initially discarded some tickets because they didn’t feel they needed any coupons themselves. But the boys’ project sounded like a very good idea.

In all, the young men gathered more than 2,000 Monopoly game tickets from friends, family and local shoppers all over Plumas County — even through Facebook.

When word about their project got around, the Exxon Mobile station in downtown Quincy, where their mom is the manager in training, began collecting tickets for the boys. And the US Bank branch inside the Safeway also saved game pieces and donated them.

Gonzales contacted the Community Action Network (CAN) food pantry in Quincy to arrange for receipt of the donated food and CAN representative Kitty Gay met the boys at the store with a pleased and grateful smile.

The food pantry operates through grants and donations under the auspices of the Plumas Crisis Intervention and Resource Center. CAN serves 1,200 to 1,500 people a month “in various ways,” Gay said as the boys prepared to check out with their loaded grocery cart.

Safeway Manager Sheldon Salyer and Assistant Manager Cody Lacrue worked in advance to make the shopping expedition a success by making sure the store had everything in stock. In cases where the local branch didn’t carry something specific listed on the coupons (like fresh-baked French bread), the store substituted sandwich bread, etc.

When the final receipt printed out with the tally of all the groceries, Tysen and Skylar broke into big grins because they had collected enough winning coupons to receive over $150 in free food from Safeway. That made a fine donation to the CAN pantry, indeed.

The boys were excited by their success and are already planning to repeat the project next year. They will put the word out early so anyone who wants to help may donate.

“Next year, we’re going to be more organized,” Tysen said as he and Skylar glanced at their tired hands. “We’re going to use the Safeway Monopoly app to add up everything we collect.”