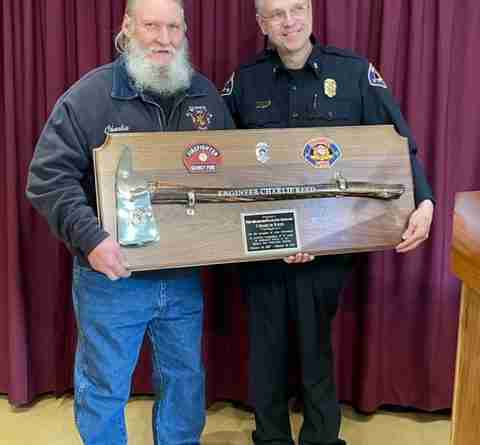 Quincy Fire Chief Robbie Cassou, right, is used to acknowledging the work to others as he did earlier this year with facilities manage and mechanic Charlie Read. Now, it's Cassou who announced that he will be retiring next June. File photo by Julie Cassou
News
March 3, 2022March 11, 2022 Editor

The Quincy Volunteer Fire Department members selected Charlie Read as their 2021 Firefighter of the Year. He was also a paid employee for the fire department since 2007 and retired as its mechanic and facilities manager last December. Fire Chief Robbie Cassou took the opportunity to also recognize Read for that important role he played in maintaining and repairing the department’s assorted assets.

In making the presentation for the coveted Firefighter of the Year Award during the annual awards ceremony Saturday, Feb. 26, Commissioner Johnny Mansell noted that Read joined the department 15 years ago and had distinguished himself not only as an excellent firefighter but as a valuable instructor and mentor to others in the department.

“His ability to operate the department’s apparatus and equipment is unparalleled. Every year he is one of the top 10 responders for emergency calls. Since joining the department he has been indispensable at every fire academy, weekend and after-hour classes,” Mansell said.

Fire Chief Robbie Cassou thanked Read (who is also a longtime volunteer for the Greenhorn Fire Department where he lives) for his invaluable years of service to the department. He said that with Read’s decades of experience as a heavy duty mechanic, there was no job too big or too small for him to take on.

“His mechanical experience and auto restoration allowed him to take any used vehicle we acquired and get it into serviceable condition and make it look new. Charlie has made numerous modifications to our existing vehicles and to our facilities to continuously increase their capabilities and reliability,” said Cassou.

He added, “Quincy has one of the best training facilities in the region, due, in no small part, to Charlie’s fabrication of the many training props including the propane-powered burn building. But beyond his abilities as an electrician, carpenter, plumber and master mechanic, he has been an inspiration and mentor to generations of firefighters always willing to share his knowledge and experience with others.”

Team leader Tracy Weaver presented the 2021 Support Team Member of the Year Award to a long-standing member of the Quincy Volunteer Fire Department, Tony DeMartini. He was honored for his dedication and commitment to the team’s ongoing training programs and his exceptional dependability in responding to emergency calls — just as he did while serving on the department for decades as a firefighter and captain, which also earned him the Firefighter of the Year award in 2018.

Pins were presented to the top three individual responders in 2021. Leading the list and going out on an incredible 255 calls was Firefighter Kaylee Chandler. Firefighter/engineer Robert “Bubba” Pierson was next making it to 237 calls followed by Deputy Fire Chief Frank Carey with 218 calls.

The department is staffed by volunteer firefighters and support team members and a paid staff of three: the chief, administrative secretary Karrie White and facilities manager and mechanic Chopper Munoz, who replaced Read.

Quincy Fire, as with all the departments in the county and across the country, is always looking for volunteers to become firefighters or members of the support team. If you think you might be interested in learning how you can serve your community through the rewarding experience of being a member of your local fire department’s  ‘family’ you are encouraged to talk to your fire chief or any volunteer firefighter.