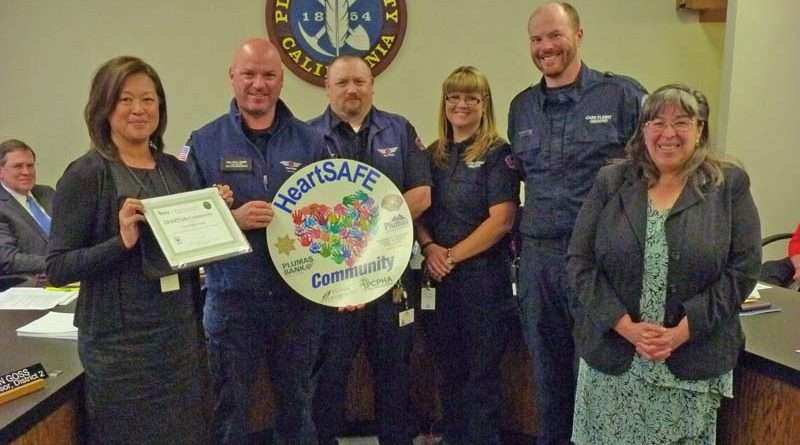 According to Care Flight paramedic Sam Blesse, Quincy is the first rural community in California to be designated a HEARTSafe Community and Plumas County is one of only three California counties to attain that designation for part of its area. Blesse added, “This is quite a big deal for a community of this size.”

At the board of supervisors meeting on May 2, Dr. Jeffrey Kepple, CEO of Plumas District Hospital, said, “Our partnership with Care Flight has been better than we thought it would be. They have done everything they promised to do.”

Blesse, for his part, praised Care Flight’s partners in the effort: the district hospital, Plumas County Public Health Agency and the  sheriff’s office.

“This happened faster than we thought it would because of the efforts of the community,” said Blesse.

Mimi Hall, director of public health, said the goal of the partnership was to make every community in Plumas County a HEARTSafe Community.

Blesse noted that 200 people have been trained in CPR in the past 10 months.

In answer to a question from the board, Blesse said cardiac arrest patients from Portola are generally flown to Reno for care, from Chester to Enloe Medical Center in Chico and from Quincy to either Reno or Enloe.

Bob Perreault, director of public works, described to the board his frustrations working with the U.S. Forest Service on reconstruction of a portion of the Beckwourth-Genesee Road.

“Unfortunately, this is one of those projects that starts off with agreement between the county and the USFS but then gets transformed,” he said; then added, “The USFS keeps changing its position.”

In 2015-2016, 5 miles of the Beckwourth-Genesee Road used by off-highway vehicles were reconstructed. The federal government had provided mitigation funds to build a stretch of OHV trail next to the reconstructed highway.

In 2012, Perreault said the USFS decided instead to build a 10-mile OHV trail away from the road. The county agreed to seek state OHV funds and then design and construct this 10-mile trail and Plumas National Forest agreed to do the environmental review for the work.

Then, on April 17 the USFS decided to spend the mitigation money on building a staging area along the Beckwourth-Genesee Road with no mitigation for the loss of the 5 miles of OHV trail that had begun the whole process.

The chair of the board sent a letter to Plumas National Forest protesting this proposal and the board ratified this letter at the board meeting.

Perreault said he will be filing a freedom of information request to see the environmental review for the 10-mile trail that was used by the USFS to make its decision not to build the 10-mile trail.

Eleven junior and senior high school students from the Friday Night Life Youth Council gave a presentation to the board on how to prevent underage drinking and teen abuse of prescription drugs.

The Youth Council’s recommendations are will be described in a future article.

The board allowed the Feather River Resource Conservation District to withdraw its funds from the county’s treasury.

County Treasurer Julie White said Caltrans has been pressuring the district to put its funds under separate management. White said the removal of the district’s funds would not significantly affect the county’s overall investment pool.

The county counsel will receive temporary legal help from the law firm Prentice, Long and Epperson to handle routine legal matters for the two months it will take until a new attorney can come on board.

The board agreed to move $104,000 from the general fund to a new fund designated specifically for money from the state’s Abandoned Vehicle Abatement Program. This new fund will be used to pay for enforcement of county codes regarding abandoned vehicles and buildings in disrepair.

County Auditor-Controller Roberta Allen said, “The abandoned vehicle abatement fund should have been a separate fund all along.”

The sheriff’s office received two of its four new patrol cars April 13. The four patrol cars had already been approved in the current budget.

The board also authorized the sheriff to purchase a vehicle to transport the county’s eight, soon to be nine, boats. The tow vehicle had also already been approved for purchase should the need arise.

Sheriff Greg Hagwood told the board that the tow vehicle that the sheriff’s office is currently using is 30 years old, government surplus and becoming increasingly unreliable.