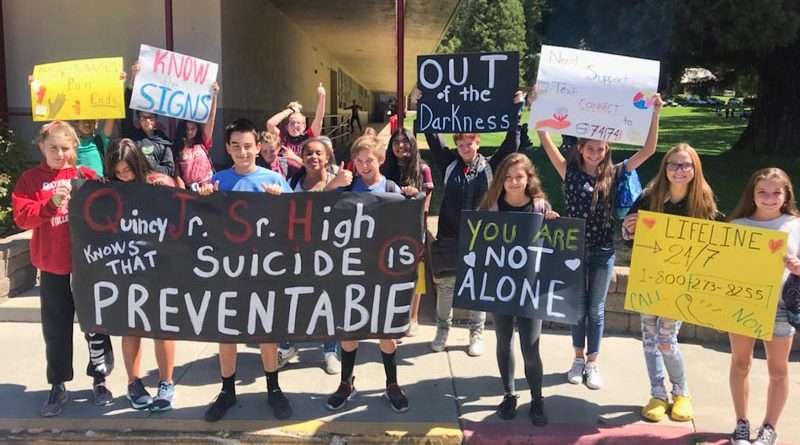 QJSHS middle-school students have been marching to downtown Quincy each Friday in September in support of national Out of the Darkness efforts to increase awareness about suicide prevention. Local drivers have honked, waved and offered praise for the students’ activism. The youth are also expected to join FRC’s Out of the Darkness walk that is open to the community on Thursday, Sept. 19, beginning at 4:30 p.m. Photo by Rhonda Wayson
News
September 18, 2019September 25, 2019 Roni Java, Staff Writer

Quincy Junior-Senior High School’s seventh- and eighth-graders have joined the national “Out of the Darkness” effort to raise awareness about preventing suicide, the 10th leading cause of death in the United States.

Marching each Friday in September, the middle schoolers walk from their downtown Quincy campus to the local post office and back with colorful signs sharing messages of hope and prevention. They are part of local observances and community actions taking place throughout the county.

“Our students are walking to observe September as Suicide Awareness and Prevention month,” Rhonda Wayson explained. “They want to increase understanding in the community and raise awareness for their fellow students.”

Wayson serves as Quincy High’s student services coordinator and she helps classes organize a variety of activities each year to promote inclusiveness and optimal mental and emotional health.

She commended the students for taking an active role on a sensitive issue that affects schools in both large and small communities.

“Our students are spreading the message that the tragedy of suicide is preventable when you come out of the darkness and talk about thoughts and feelings,” Wayson said.

The young marchers are sharing information as they go, talking about the importance of knowing the signs of someone who is suicidal and making sure people have a trusted person they can talk to.

As part of the national campaign to raise awareness, which is sponsored by the American Foundation for Suicide Prevention (AFSP), the Quincy students are talking about knowing there is help available and whom to call or text for support.

Wayson said she and a number of the junior-high students also plan to attend the Sept. 19 “Out of the Darkness” rally and march tomorrow from Feather River College to Dame Shirley Plaza on Main Street. The FRC event is open to the public.

The AFSP promotes Out of the Darkness walks in hundreds of cities nationwide to give people the courage to open up about their own struggles or losses. The events also offer a platform to change cultural approaches to mental health.

The walks include an estimated 250,000 people every year in all 50 states and the organization urges community participation to help change the conversation about mental health, raise funds and “put a stop to this tragic loss of life” by increasing awareness to save lives and bring hope to those affected by suicide.

FRC Out of the Darkness Walk for Suicide Prevention Awareness

Meet at FRC on the lawn behind the library. Participants will make posters and give out ribbons.

Walk from FRC to Dame Shirley Plaza on Main Street in downtown Quincy.

Resource tables and information from county health agencies and other organizations will be available. The event will also include music, refreshments and speakers. Participants will have opportunities for reflection and remembrance and candles will be lighted at dusk.

According to the American Foundation for Suicide Prevention (afsp.donordrive.com), there is no single cause of suicide. It occurs most often when stressors exceed the current coping abilities of someone suffering from a mental health condition, including depression.

– Currently, suicide is the 10th leading cause of death in the United States.

– A person dies by suicide about every 12.8 minutes in the United States.

– Every day, approximately 129 Americans take their own life.

– Ninety percent of all people who die by suicide have a diagnosable psychiatric disorder at the time of their death.

– There are 3.54 male suicides for every female suicide, but three times as many females as males attempt suicide.

– 494,169 people visited a hospital for injuries due to self-harm behavior, suggesting that approximately 12 people harm themselves (not necessarily intending to take their lives) for every reported death by suicide.

– Over 50 percent of all people who die by suicide suffer from major depression. If one includes alcoholics who are depressed, this figure rises to over 75 percent.

– Depression affects nearly 5 to 8 percent of Americans aged 18 and over in a given year.

– Depression is among the most treatable of psychiatric illnesses.

– Between 80 and 90 percent of people with depression respond positively to treatment and almost all patients gain some relief from their symptoms. But first, depression has to be recognized.

– The best way to prevent suicide is through early detection, diagnosis and treatment of depression and other mental health conditions.