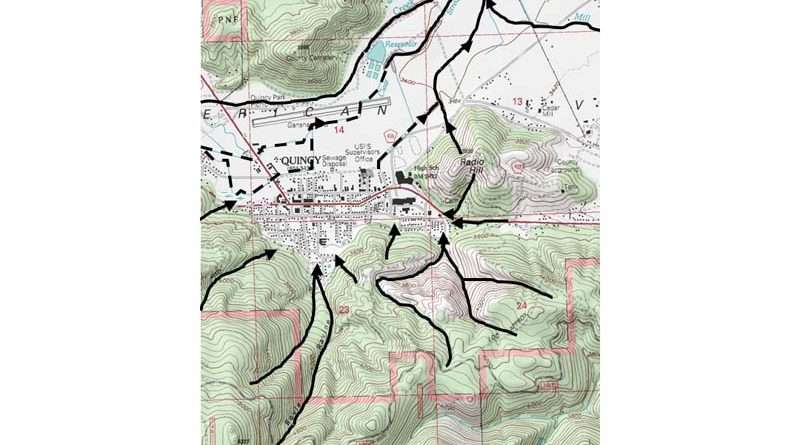 John Mannle, assistant director of Plumas County Public Works, said there are a combination of reasons as to why it floods in Quincy. Some reasons have to do with where Quincy is located and others have to do with unusual weather called “rain on snow” events.

In terms of location, Quincy sits between a steep north-facing mountain slope and the southern edge of the flat American Valley.

Many large creeks empty into the American Valley and everything that drains into the valley then has to drain out through a single, narrow outlet, located at Oakland Camp.

High intensity rainfall events cause water to rush down the steep mountain slopes surrounding Quincy and into town.

This is especially dramatic when rain falls on snow because the rain melts the snow quickly. Consequently, both the runoff from the ongoing rain event and the runoff from previous storm events, stored as snow, comes downhill into town all at once.

When these rain on snow events occur, there is too much water for man-made drainage systems to handle. The storm water has to go somewhere, so it bypasses the storm water system on its way down to the valley, flooding yards and sometimes homes along the way.

This is complicated by the fact that at the same time that storm water is moving downhill into Quincy, the American Valley is filling up from the many creeks feeding it. That pooled water backs up toward Quincy.

When this has happened, there is no place for the runoff coming into Quincy to go so storm water ponds in town, flooding fields and homes.

Quincy is located in a relatively small area, pressed between some very steep mountains to the west, south and east and a very flat American Valley to the north.

Because the snow associated with rain on snow events is relatively warm, it contains a lot of water relative to dry, cold snow. This also increases the amount of runoff coming into downtown Quincy,

Before there was a town in Quincy, the streams coming down-slope probably ran right through what now is Quincy on their way to the valley.

There is not enough water in the many small drainages coming into Quincy during most summers to cause flooding. However, there was enough water that it probably encouraged people to settle here.

Over the 150 years Quincy has existed, a storm drainage system has been built in Quincy on a piecemeal basis to drain away storm water.

Because of Quincy’s storm water system, it only floods in Quincy now during very large precipitation events.

However, the system wasn’t engineered to withstand very large events, like rain on snow events.”

Mannle said, “The community has built up over a period of 150 years. The drainage systems have evolved over that same period and have been modified by human activity over time.”

Joe Blackwell, deputy director of Public Works, whose family has lived in the area for generations, noted that since the water has no place to go once it reaches the valley storm water starts backing up in the storm water drainage system.

Blackwell has seen storm water jetting into the air out of the storm water drainage system, before heading down-slope again.

Mannle and Blackwell noted that flooding in Quincy occurred in 1986, 1997, 2006 and now 2016. Mannle commented that this flooding has probably been happening for millennia.

Mannle and Blackwell noted that there is not a whole lot the Public Works Department, or anyone else, can do about some flooding during very large rain on snow events.

County crews work to keep storm drains open before and after storms. However, during very large storms, material is continually coming downstream into town. This debris blocks drains and has to be continually cleared by crews.

Mannle said the only long-term solution would be to engineer a giant sluiceway to speed the flow of water out of the valley. However, this hasn’t been done in the county since the 1970s. Such a structure was built to move water around Chester into Lake Almanor.

Mannle added that it would be too expensive to do this now. Doing so would also destroy wetlands and also just send the problem downstream. The time taken for storm water to fill the American Valley and then release that water downstream, spreads out the time over which Lower Indian Creek and then the North Fork of the Feather River receives water from American Valley.

If a way was made to quicken the flow of water out of the valley and into the canyon, peak flood flow volumes would be much higher downstream, possibly eroding roads and property.

The California Department of Water Resources data and research testifies to climatic changes in the recent past and predicts significant changes to the Sierra Nevada ahead.

According to most climate scientists, this region can expect less precipitation to fall as snow and more to fall as rain in the future and with more extreme weather events.

Given warming temperatures, rain on snow events might be something one can expect to occur more often in coming years.

The 2015 California Department of Water Resource’s report, California Climate Science and Data for Water Resources Management, contains a lot of information on the consequences for the region because of warming temperatures. The report can be found at water.ca.gov/climatechange/docs/CA_Climate_Science_and_Data_Final_Release_June_2015.pdf.