Rayna (Narbaitz) Simpson was born on January 31, 1935 to Peter John and Marion Narbaitz in Westwood, California. She had one sister, Jeanne Marie Walton who preceded her in death last year. 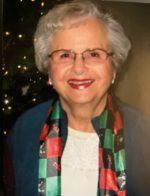 She attended San Jose State University where she met her future husband, Gerald (Jerry) on a blind date. They married in 1956 and lived in Antioch, California, while completing their first teaching jobs there. They eventually ended up in Northern California to be close to Marion Malvich, Rayna’s Mom.

Lisa was born in 1960 and Greg in 1962 in Chester where they spent most of their lives, growing up. In moves between Chester and Live Oak and Live Oak and Chester, and raising two children, Rayna obtained her Speech and Hearing credentials which enabled her to work as a speech therapist, which she loved. She worked for the most part at Fletcher Walker Elementary School in Westwood/Susanville.

Rayna passed away peacefully on January 3, 2023, at Oakmont of Fair Oaks where she had resided, with care, for the past 2+ years. She will be buried next to her husband Jerry, and near her sister, grandfather, grandmother, aunt, cousin and her best friend from elementary school.

A Celebration of Life will be held on February 2, 2023, at 2 pm at the Trinity Methodist Church, 285 E. 5th Street, Chico, Ca 95928. For those unable to attend in person, a Zoom meeting will be established for viewing. The link to the Zoom will be forthcoming.