Rebekah Louise Ledwig passed away due to complications from a stroke on October 16, 2021. She was born on July 8, 1958, in Dumas, Texas, to Jack and Mary Jo Ledwig. She was one of nine children. 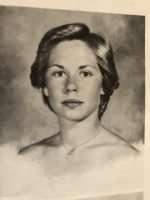 At the age of 8, Rebekah and her family moved to Portola, where she fell in love with hiking, swimming, fishing and horseback riding. When she entered high school she became involved in cheerleading, choir, band, drama and track. She was also the bat girl for the baseball team. After high school, Rebekah competed in the Sweetheart of the Mountains pageant.

She married Chester Garey in 1979, and they made their home in Portola for many years. She worked at Plumas Bank and later for Pike Chiropractic. Rebekah and Chester moved to Arizona in 2000, and were later divorced.

Rebekah decided to take a different career path and went to school to become a traveling Physical Therapy Assistant. She earned her degree with top grades, and began traveling and working in the Pacific Northwest. Her travels took her to Coeur d’Alene, Idaho, and she fell in love with the area. When the opportunity arose, she decided to settle there permanently, and lived there until her death. She was committed to her work, and loved helping her patients to recover from injury or health reasons. Her patients loved her in return.