It is with heavy hearts that we announce the passing of a long time Plumas County resident. Richard Dale Trost. (Dick) was a loving husband, father, uncle and grandfather. Dick was born on April 23,1945, in Cooperstown, North Dakota. He was the youngest of nine children from parents Edward Carl Trost and Elizabeth Veronica Pfeifer. He grew up on his parents’ farm in Hope, North Dakota. The valuable lessons of hard work and moral ethics came at an early age and remained with him through his entire life. 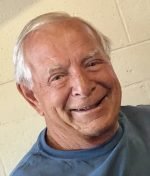 After graduation from Hope High School in 1963, he proudly joined the United States Navy. He served his country for three years on the USS Canberra CAG 3 with his brother Jim Trost for a short time. He received his honorable discharge as an Interior Communications Electrician Third Class (IC3) having completed two tours off the coast of Vietnam. Western Pacific/Union Pacific was where he served the next forty-three years. He rose through the ranks and became the “man to go to” when trains went down, even chartering a helicopter to get to an inoperable train.

His love and pride in life was his family. He shared 53 years with his best friend, Susie. They met in Oroville, were married in 1968. Western Pacific Railroad transferred them to Stockton in 1969 where they spent four years. They had two children and lived in Oroville for eight years. In 1980, the family of four moved to Portola where they made their home for the next forty-two years. The two of them enjoyed traveling and boating. His dedication to his grandchildren was unparalleled. He would devote time or distance to watch their sports and school activities. He was always there for all of them. His infectious sense of humor and wit will carry on through them.