Richard (Dick) Castaldini passed away November 23, 2022, after a brief illness. He was born July 25, 1936, to Marion and Ed Castaldini in Springfield, MA. He attended Technical High School in Springfield and then the University of Massachusetts, where he met Ann Mogul, his wife of 62 years. He joined the ROTC at UMass, and served 6 months active duty in the Army at Ft. Lee, Virginia, followed by 8 years Reserves. In 1961, he attended Duke University for his Masters of Forestry Degree. 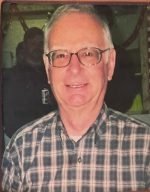 After retiring in 1994, Dick and his wife enjoyed traveling at home and abroad. He particularly enjoyed Italy, New Zealand and Australia. In addition to traveling, he enjoyed playing poker in Reno and especially with the local friends in Quincy. He would often be seen walking through the town, or chopping firewood, as recently as this fall. His children remember his involvement in Scouts, timing high school sports games, and taking them to concerts. Despite the distance to the Bay Area, Dick and Ann were active in their grandchildren’s lives and attended as many theatre, gymnastics, and band events as they could. Dick will be remembered for his 50 years of service with the Lions Club, positions on the Quincy Water Board and NARFE (National Association of Retired Federal Employees) and his involvement with the Quincy Library Group.   At age 86, he was still ushering at St. John’s Catholic Church.

Dick is survived by his wife Ann, children David (Elizabeth), John, and Marisa (Kevin), his grandchildren Levi and Michelle, and his sister Ellen. He was preceded by his parents and brother Don Castaldini.

The family will hold a Celebration of Life on March 12, 2023, at the Quincy Vets’ Hall, time TBA.