As we approach the first anniversary of his death, we honor Roger W Clark, who passed away peacefully on May 27, 2021. He was a wonderful son, brother, uncle, husband, father, grandfather, great grandfather, and friend to many. 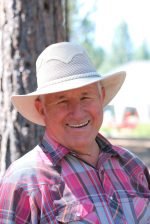 Roger was born in Afton, Wyoming on July 24, 1938, to Elva Lee Woodrum and Milson Clark. Roger had two sisters, Elva Delores and Janene W, and four brothers, Milson Spencer, Dennis Keith, Dee Jay, and John Russell. All have preceded him in death except his oldest brother Milson Spencer.

The Clark family moved from Wyoming to the Susanville, Ca. area, and later to Chico, Ca. Roger learned the value of hard work at an early age, milking cows and harvesting grain. He attended Shasta Union Elementary School where he became acquainted with Bonnie Clemans who had recently moved to Chico from Cromberg, Ca., with her parents.

As a teenager, Roger enjoyed swimming, and playing basketball and baseball. While living in Chico, Roger and Bonnie loved participating in the many youth activities sponsored by the Church of Jesus Christ of Latter-day Saints.

Roger and Bonnie both graduated from Chico High School in 1956 and 1958, respectively. They both attended Chico State for a time. The two were married February 10, 1959, and lived in Carmichael, Ca. for seven years. Roger worked for Brighton Sand and Gravel, and later for Aerojet, where he worked on the Polaris missile.

In 1966, Roger had the opportunity to take over the Morning Glory dairy route with 350 retail customers and fourteen stores in Plumas and Sierra counties. Roger, Bonnie, and three children moved to Portola, California, and shortly after, bought out the Model Dairy Distributor. The hours were long, but Roger enjoyed getting to know the people on his route. During this time, Roger also held leadership positions in the LDS church in Portola.

A few years later, after selling the dairy route, Roger saw a need for a backhoe in the Portola area. He got his contractor’s license, a backhoe, and a dump truck, and worked as a contractor and land developer until he retired.

During Roger’s lifetime he had some serious health issues, and the doctors weren’t sure if he would survive. Many prayers and special blessings gave us several more years with him. The nurses and doctors called him “The Miracle Man.”

At Roger’s funeral on June 5, 2021, many people mentioned the things that Roger had done to help them over the years, as he was a kind and generous man. He had a large family and many friends who loved him dearly. He had a winning smile and a sense of humor like no other. He brought laughter and joy wherever he went.

Roger loved Bonnie, his wife of 62 years. They are the parents of Kayleen Marshall (Bob), Keith Clark (Marcie), Karen Clark (Doug), Koreen Christensen (Brad), Kenneth Clark (Jess), Karla Wearin (Justin), and Kurtis Clark (Tamara). There are (so far) twenty-three grandchildren and twenty-four great grandchildren. Roger is missed by all who knew and loved him.