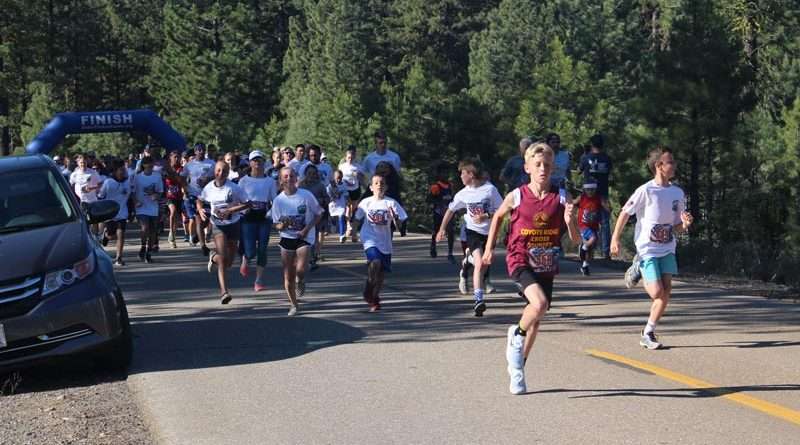 Several hundred runners converged west of town at the new race location at Stover Mountain Road to compete for medals and bragging rights at the 40th annual Chester Classic Fourth of July Fun Run and Walk.

The Almanor Recreation and Park District-sponsored fundraiser is the premier 3.25-mile (5k) footrace event in Northern California, with competitors not only from around Plumas and Lassen counties, but many participating from throughout a number of western states.

A number of the contestants commented that the new route for the Fun Run was as enjoyable as the previous course, with the added observation that the return portion of the route starting at the halfway point was all downhill, which made for an interesting change from the old route.

Overall, exactly 600 runners participated in the run, said Bergmann, slightly less than in recent years, but still an encouraging number of participants.

“Considering we had a new race site, the response from everybody was overwhelmingly positive. … They loved the new course through the woods and found it both challenging and spectacular.”

The two-man band Rickety Bridge played a number of country and rock classics and was highly regarded by the foot racers, he said. In addition a number of boom boxes were placed along the route so the contestants had music to listen to from start to finish.

“Hopefully those who may have chosen not to come because they were unsure of the new course will reconsider and definitely come out next year,” Bergmann said, adding that by any measure, the event “was a huge success.”

Given the upbeat reactions by many of the runners, Bergmann stated he expected the same route would likely be used again in 2020.