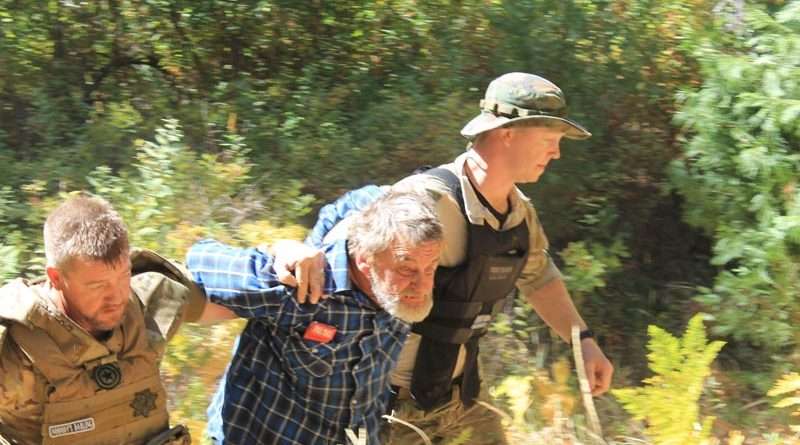 Sgt. Chad Hermann left, and his son Deputy Tyler Hermann, right, escort the suspect Robert Knight out of the bushes where he was hiding off of Beskeen Lane in Quincy. He was taken into custody around 12:30 p.m. after a search that involved the Plumas County Sheriff, CHP, and the Department of Fish and Wildlife. Photo by Victoria Metcalf
News
September 14, 2018September 18, 2018 Editor

12:30 p.m.: Sheriff Greg Hagwood reports that the suspect is in custody; he was arrested on Beskeen Lane. The sheriff wants to thank the California Highway Patrol and the Department of Fish and Wildlife for their assistance. Reporter Victoria Metcalf has been on scene and more information will be posted as it becomes available.

12:12 p.m. update: A Code Red alert has been issued for residents in the vicinity of Gansner Park, Beskeen Lane and West’s Ranch Road (the area where the suspect is believed to be) to be aware of the potential danger and to alert authorities if he is spotted. Sheriff Greg Hagwood said that CHP aircraft are aiding in the search.

The Plumas County Sheriff’s Office reports that a woman was attacked with a box cutter in the vicinity of the Spanish Creek and Gold Pan motels in Quincy. Deputies are on the lookout for Robert Knight, the alleged assailant. Knight is a Quincy resident who is reported to be 5’8″, 150 pounds, with short grey hair and possible goatee. He was last seen wearing blue jeans and a plaid shirt. He is considered to be armed and dangerous. Anyone with information is asked to call 530-283-6300 or 911. Sheriff Greg Hagwood said the SWAT team has been activated to aid in the search. He reports that the victim is expected to survive.

6 thoughts on “Search underway for suspected assailant; now in custody”