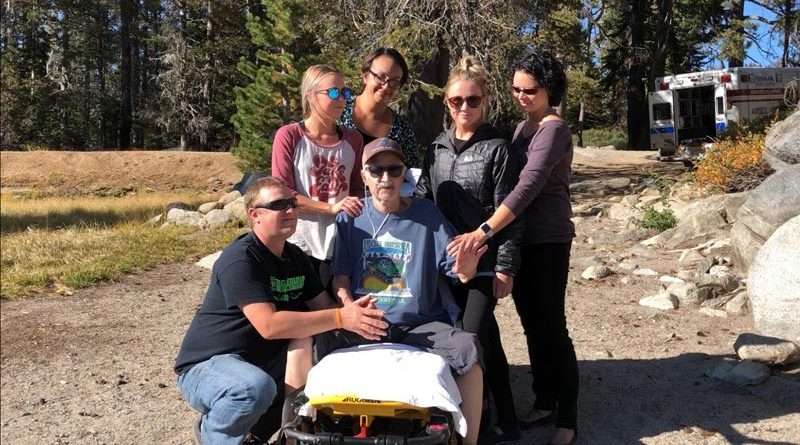 Steve Tolen is surrounded by five of his six children during his final trip to Silver Lake on Oct. 5, 2017. He died the next morning. From left: Steve Jr., Sierra, Stephanie, Ashley and Andrea.
News
June 3, 2019June 3, 2019 Debra Moore, Managing Editor

The ambulance doors opened and its occupant, Steve Tolen, looked out at the view. “You brought me to my lake,” he said.

And though he would die the next morning, that trip was actually the beginning of his dream becoming a reality.

Tolen, a longtime area paramedic who died Oct. 6, 2017, had worked to establish a Sentimental Journey program in Quincy, but encountered many roadblocks.

Thanks to the efforts of local paramedic Sam Blesse and the Care Flight organization, Tolen’s vision is now a reality.

Sentimental Journey began as a local program in Colorado. It now operates in 33 states, enabling patients to reconnect with people, places and meaningful experiences from their past.

For Tolen, that was a trip to Silver Lake.

“It was an incredible, emotional, amazing day,” said daughter Andrea Mitten. She and four of Steve’s five other children made the trek with him.

“It was one of his favorite places in Plumas County,” she said. “We frequently went there camping or on day trips when we would go kayaking. When Sam (Blesse) offered, it was a no-brainer.”

Blesse remembers that day well and Steve’s reaction when he realized he was at Silver Lake.

Blesse knew of Steve’s desire to establish Sentimental Journey and his love of the lake.

“I called my bosses in Reno and told them this is what I want to do and they said, ‘Absolutely, do it.’”

Now, less than two years later, others will have the same opportunity to visit a beloved place or person as they near the end of their lives and no longer have the ability to go on their own.

To qualify, an individual must be terminally ill and a request would be made through the hospital or hospice. Care Flight, using one of its local ambulances will transport a patient within the area to a location of his or her choice.

There were several hurdles to overcome before the project could become a reality. Some were the same issues — such as liability and insurance — that Tolen faced, but Blesse had the support of the current hospital administration as well as his Care Flight organization to help overcome them.

How it all began

Back in 1993, an ambulance team was transporting a hospice patient in Colorado, when they noticed that he was trying to look out the window. The man said that he wanted to see the fall colors one last time.

The driver, Kim Madison,  and her partner, Steve Berry, made a slight detour and took the terminally ill patient to a field surrounded by brilliantly colored aspen trees.

In an article published in 2009, Berry was quoted as saying, “Even though I had lived in these mountains my entire life, the first time I really saw an aspen was through a dying man’s eyes.”

It inspired the pair to want to provide such trips to other hospice patients and Sentimental Journey was born.

When asked if she would recommend the experience to others, Andrea said, “Very, very much so. I was honored to be part of it. It meant a lot to him; it meant a lot to us.”

Andrea said she and her family were “beyond grateful for this program and for Sam getting it going.”