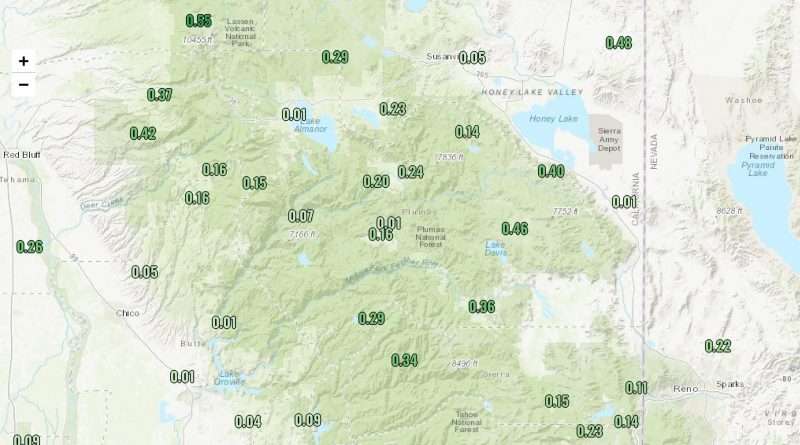 The weather system that passed through last night and today turned out to be a surprise gift for firefighters.  They knew the frontal passage would bring them wind, rain, and lightning.  But they didn’t know exactly what the mix would be. This time of year a frontal passage can bring lots of wind and lightning and be pretty light on rain.  There was strong wind and plenty of lightning, but the rain amounts were very generous this time.

Much of the fire area saw enough rain to really take the heat out of the fire; a quarter inch or more. Some areas saw over a half an inch and others, like Chester, got only a few 100’ths.  The bottom line is where the fire was quiet yesterday; it is still quiet.  And where it was running yesterday, it has not stopped entirely, but it has slowed down.

The rain came just in time. The fire made a major run in the Hat Creek area yesterday. The new swath of fire is 13 miles long and several miles wide.  It added over 20,000 acres to the fire.

The fire was headed from Badger Mountain, out across Highway 44, and into the flats east of Hat Creek Rim. The side of the fire was moving laterally into the Old Station area.  Even though it was a flanking fire rather than the head of the fire, it took a major fire fight to keep the fire out of Old Station.  This morning, fire managers reported no structures lost in Old Station.

The winds in the Hat Creek area have increased since this morning’s rain.  The fire is quiet near Old Station but fire officials report that it is still burning actively to the north along Hat Creek Rim.

The big question for firefighters now is how long will the effects of this rain last.  They won’t be letting their guard down any time soon.

Firefighters know that a couple days of sunshine and a little wind can bring a fire back to life. Sunshine and wind is exactly what the weather forecast is calling for.

The biggest priority will be getting a direct line around the fire in the Hat Creek area. Firefighters are doing everything in their power to get a direct fire line around it and take the heat out before it can come back to life.  Patrols will continue throughout the fire area to make sure the wind doesn’t breathe new life into the fire.

The Great Basin Incident Management Team 1, who has been managing the East Zone of the Dixie Fire, has come to the end of their tour.  They will be heading home Sunday for a couple days of well deserved rest. Most of the incident management team members work 16 to 18 hours a day, seven days a week, while on a fire.  In a fire season like this, they will be working for months.  It is important for their physical and mental health that they get a couple days off after a 14-day tour.  This enables them to stay sharp all throughout the fire season.  They are being replaced by California Federal Incident Management Team 1 under the leaderrship of Jerry McGowan.  Jerry and his team are no strangers to this fire having already spent a couple weeks managing the incident.

The CalFire incident management team managing the West Zone of the Dixie Fire is nearing the end of their tour as well.  They have not yet made any announcements about which team will be taking their place.