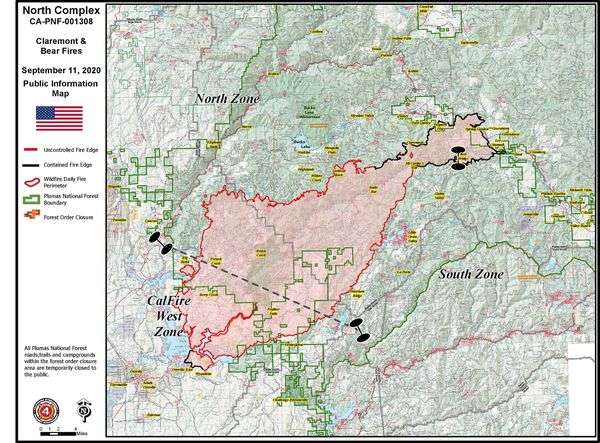 Editor’s note: Now that the Claremont-Bear-North Complex Fire has grown and spread into new areas and jurisdictions, Plumas News will devote its time and resources to the fire areas that directly impact Plumas County. We will include links to more information for the portion of the fire that is now referred to as the North Complex Fire West Zone. There are several news outlets and entities reporting the details of the west zone so there is no shortage of coverage. Today, Victoria Metcalf, the assistant editor for Feather Publishing’s currently shuttered newspapers, will be going out on the fire to bring us back information from the ground firefight.

7:3o p.m. UPDATE: The North Complex Fire is 252,313 acres and is 21 percent contained with 3,282 personnel assigned to it.
The smoke has kept air quality in the hazardous range all day for the Quincy area, but it has enabled firefighters to make progress on the North Complex Fire as the smoke creates a blanket that cools the fire and increases humidity that slows the fire’s spread. However it does also keep aircraft from flying.
It’s status quo from Lee Summit around East Quincy to Claremont Peak with the fire remaining contained within the perimeter. Firing operations are still occurring on the north and south flanks as the Forest Service works to establish a perimeter and tie in with what Cal Fire is doing with the west zone (near Oroville). Good news from that front tonight. Butte County Sheriff Kory Honea adjusted the civilian death count down from 10 to nine, after it was determined that skeletal remains believed to be human, were part of a resin skeleton used by a homeowner for study purposes.
It was reported tonight that the fire remains 5 miles from Meadow Valley and Tollgate. Structure protection remains in place for the Bucks Lake area, but there is no threat to any of those areas at this time. Also in the north zone, the Forest Service is working to protect a timber area, and is adjusting its plan slightly.
In the south zone of the fire, the fire was active close to the west shoreline of Little Grass Valley Reservoir. Crews are successfully keeping fire away from structures there and the community of La Porte is being protected by fire line and hose lays. Approximately 500 firefighters will be moving to a second fire camp in Brownsville in order to work in the south zone more efficiently.
11 a.m. UPDATE: Part of this morning’s briefing was devoted to the Forest Service explaining how the Bear Fire escaped and created its path of destruction to Oroville. Operations Sections Chief Jake Cagle, who has been providing the morning, evening and sometimes midday briefings, showed a photo of the area which was very steep and heavily wooded, preventing ground crews from accessing the fire, while heavy smoke stopped an air attack. He said that he has heard a lot of “Why didn’t you guys just get in there and put it out,” but he likened that to stepping into a train going 70 mph. Cagle said the fire went on a “historic and unprecedented” 215,000 acre run that prompted mass evacuations, at 2:30 a.m. The fire was spotting 4 miles away, and at one point, forced firefighters to hunker in place as they were landlocked by flames on all sides. Fortunately they all escaped.
Original story: While the news from the North Complex Fire West Zone grows increasingly grave — there are now 10 reported dead including a 16-year-old boy — the news from the original Claremont Fire (now in the North Zone) continues to be positive.
The fire from Lee Summit to Claremont Peak remains in its current footprint. Crews are using  tactical firing operations near Lookout Rock and reinforcing structure protection in the Bucks Lake, Haskins and Highlands areas. Crews are prepping existing roads and building dozer lines to tie in with old fire scars and contingency lines from the Camp Fire. This will eventually tie in with Highway 70 north of Elephant Butte.
In the South Zone crews will continue to construct line along the Pacific Crest Trail and prep a series of existing roads south of Little Grass Reservoir to tie into La Porte Road. Structures within the Little Grass Valley Reservoir area are not currently impacted or threatened by fire but are being prepped with structure protection and hose lays as a contingency. Likewise the Forest Service is confident that the landlines and dozer lines encircling La Porte will protect that community.
The West Zone is being managed by CAL FIRE/Butte County and can be defined by drawing a straight line form Big Bend (northwest portion of the fire) directly southeast to the Sly Creek Reservoir. In addition to the 10 individuals who lost their lives, 16 remain missing, and several have been injured including some with critical burns.  Here is a link to more info: https://www.fire.ca.gov/incidents/2020/8/18/north-complex-fire/#incident-overview.

Crews will go direct on the fire where possible, but also have a plan that could entail as many as seven to 10 days of under burning to tie the north zone of the fire into Highway 70 and other roadways to provide containment.

The Claremont and Bear Fires began Aug. 17 and it appeared that the Forest Service’s strategy to manage the fires was going to be a success, but then the north east winds came in Sept. 8 and blew up the fire (specifically the portion that had been the Bear). It’s estimated that 20,000 individuals are under some type of evacuation order.

Plumas County residents who have shelter needs due to an evacuation are asked to contact Plumas County Social Services at 530-283-6350. Due to the small amount of individuals who have expressed a need  for shelter, the county will be handling those requests as they come in for now, but will continually reassess.

Attached is the latest evacuation information from the Plumas County Sheriff. The Highway 70 corridor is an advisory only at this time. 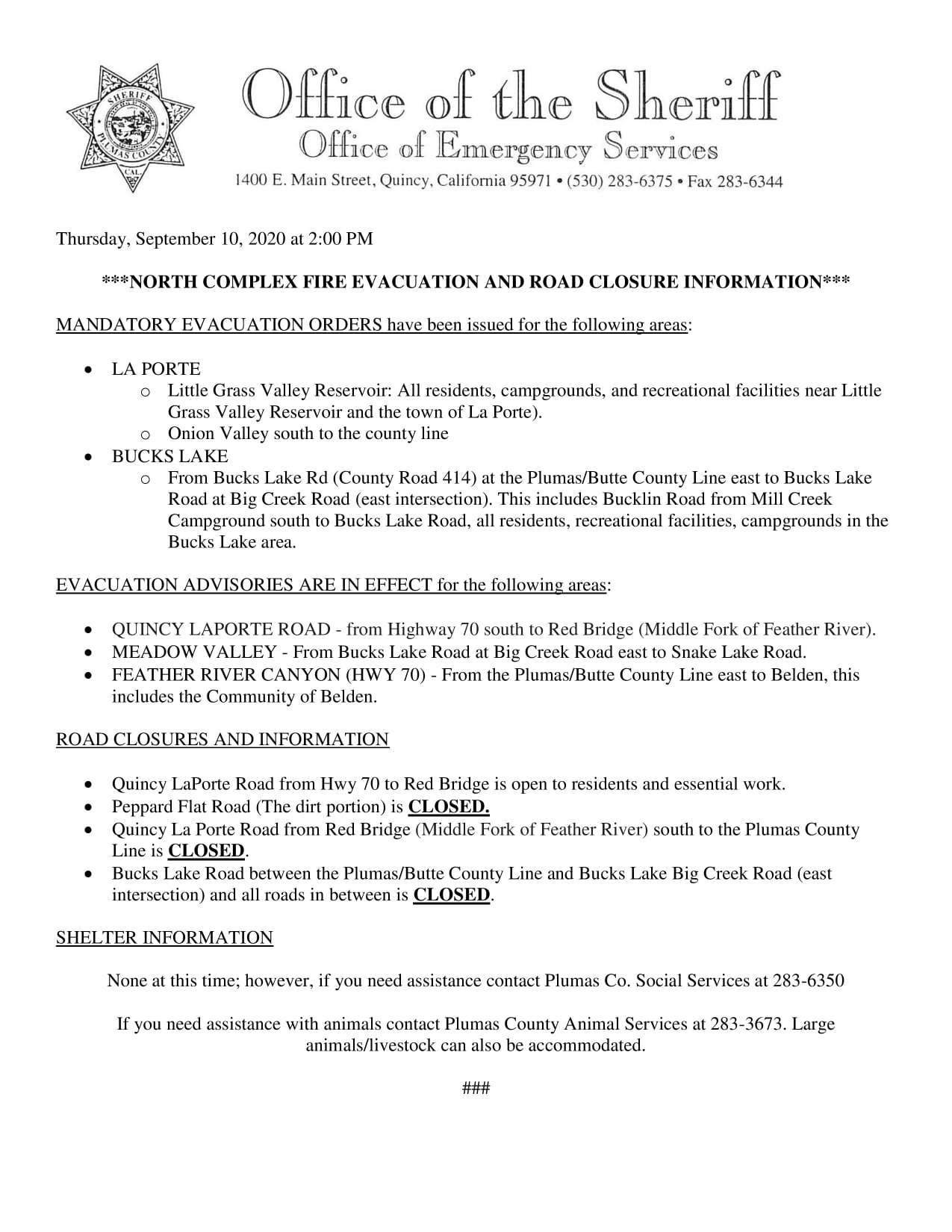