In the South Zone, with a day of relatively favorable weather, firefighters made good progress improving and securing containment lines, and were successful in making the final connection between Little Grass Valley Reservoir south along Mooreville Ridge to Sly Creek Reservoir. In the extremely steep terrain near McCarthy’s Bar, crews were able to start firing operations which will eventually back into the main body of the fire. (Earlier today, it was believed that firing operations would be jeopardized by the weather, but they were able to proceed.)

In the North Zone,  mop up continues around the northeastern perimeter of the fire, and lines continue to hold well. Thanks to cooperative winds, firefighters were able to continue protecting the Lookout Rock and Ontop Mine areas.

Moving west, fire activity is more active and in rugged terrain. Crews were able to engage directly with the fire’s edge and mop up other areas, working toward their goal of tying into the 2018 Camp Fire scar.

Some spotting behavior did occur, however firefighters were quick to catch them. Night crews plan to revisit areas that were already fired to make sure they are complete and secure. Structure protection groups are in place surrounding the fire’s perimeter to protect nearby communities, taking extra care in getting through the incoming wind event.

Original story: This is Sept. 13 and this is roughly the 26th day of posts about these fires, originally known as the Claremont and the Bear. Their original containment date had been set for Oct. 1 and at the time it seemed like a distant hallmark. Now that date has been forecast to be Nov. 2, the day before Election Day. The fire experienced a little growth overnight – the North Complex Fire is 258,802 acres, 26 percent contained with 3,282 personnel assigned to it.

Yesterday’s weather helped firefighters with their operations, but a low-pressure system is expected to bring an extended period of gusty southwest winds this afternoon (up to 30 mph) through Thursday, which will test containment lines. Winds and low humidities will cause a Fire Weather Watch to go into effect tomorrow.

The Plumas County Sheriff announced yesterday that evacuation orders for Bucks Lake and La Porte will remain in effect, though the situation will continue to be assessed. Crews are continually working to improve containment, but with the Fire Weather Watch going into effect tomorrow, the Sheriff does not expect to change the current order status for Bucks Lake or La Porte for at least the next few days and will provide another update when conditions allow. Twenty-four  hour security patrols are being provided for the evacuated areas.

On the South Zone, the fire continues to remain in its footprint from Lee Summit around East Quincy to Claremont Peak. Fire activity was also calm last night in the south zone as firefighters worked to improve containment lines. Near McCarthy’s Bar, crews will continue scouting for the best opportunities to bring fire between ridgelines and current containment lines. Crews will continue constructing hand line from the west shore of Little Grass Valley Reservoir, moving south along Mooreville Ridge and Sly Creek Reservoir. Approximately 500 firefighters will be moving to a camp in Brownsville to allow more efficient access and work.
On the North Zone, it is reported fire remains 5 miles from Meadow Valley and Tollgate. Crews will continue to secure what was already fired, with the goal of meeting indirect bulldozer lines where the 2018 Camp Fire scar is located. Structure protection groups are in place surrounding the fire’s perimeter to protect nearby communities, taking extra care in getting through the next incoming wind event.
Firing operations are still occurring on the north and south flank as the weather allows and as the Forest Service works to establish a perimeter and tie in with what Cal Fire is doing in the west zone (near Oroville). That portion of the fire has thus far claimed 12 lives, left 16 missing and put to 2,000 buildings damaged or destroyed. Damage assessment is still underway as is the search for more victims. That work is being delayed by active fire.
The West Zone is being managed by CAL FIRE/Butte County and can be defined by drawing a straight line form Big Bend (northwest portion of the fire) directly southeast to the Sly Creek Reservoir. Here is a link to more info: https://www.fire.ca.gov/incidents/2020/8/18/north-complex-fire/#incident-overview.

The Claremont and Bear Fires began Aug. 17 and it appeared that the Forest Service’s strategy to manage the fires was going to be a success, but then the north east winds came in Sept. 8 and blew up the fire (specifically the portion that had been the Bear). It’s estimated that 20,000 individuals are under some type of evacuation order. 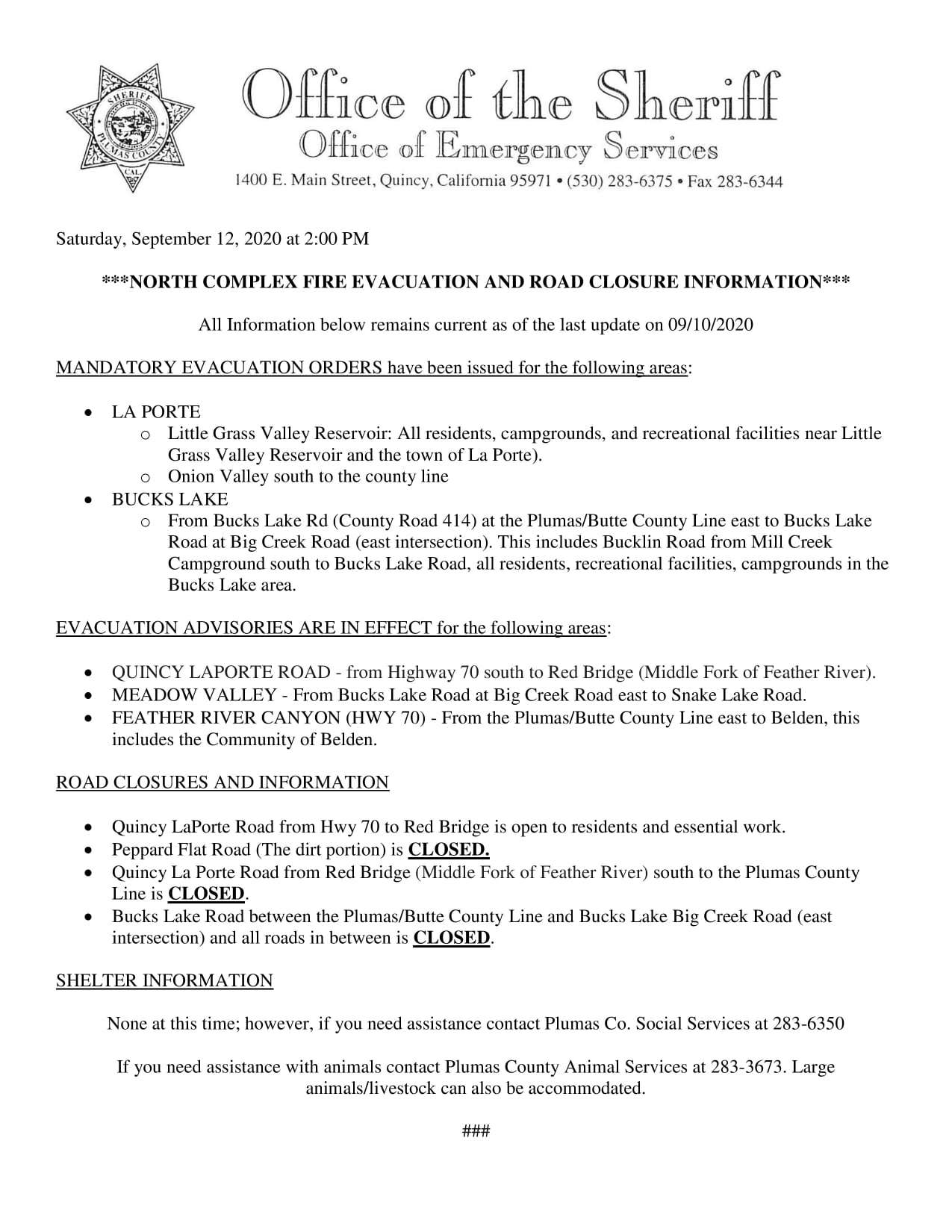