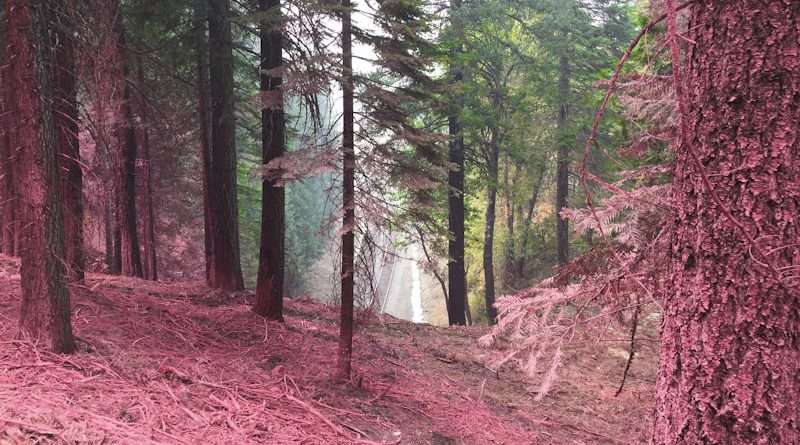 A layer of red is visible outside the community of Greenhorn as it is in other areas of Plumas County as firefighters continue to do all they can to protect residences. Photo by Roni Java
News
September 16, 2020September 17, 2020 Editor

7:42 p.m. UPDATE: According to the Forest Service briefing tonight:  Southwest winds caused the fire to remain active in Onion Valley, keeping the priority of reinforcing indirect fire line along ridges and roads tying into LaPorte Road. There was no mention of the fire jumping La Porte Road. The Northeast portion of the fire continues to stay within its perimeter.

7 p.m. UPDATE: According to the recent topographical map, the North Complex Fire has climbed up out of the Onion Valley drainage and is heading rapidly to the northeast, jumping over La Porte Road at Hog Back and spreading into Dixon Canyon.

Residents of Sloat and Cromberg should remain vigilant. 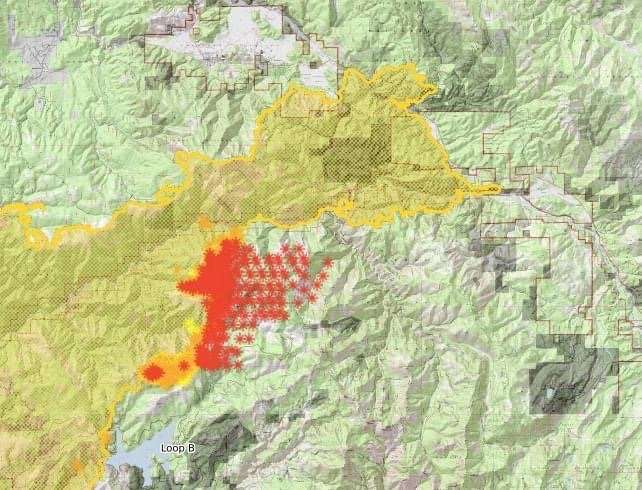 Another Red Flag Warning is going into effect from 1 p.m. Thursday to 2 a.m. Saturday. Winds are anticipated to increase across the region, and coupled with the dry conditions will result in critical fire weather. That’s not good news as the fire in the South Zone has been very active today. Residents in the Quincy area are reporting increased smoke and falling ash.

While good progress is being made on the North Complex Fire, a couple of problem areas remain. The stubborn fire doesn’t want to remain within firefighters’ desired perimeters and slops over and spots with the winds. Winds always bring the benefit of clearer air and the ability to use aircraft, but the negative aspect is clear — it can push the fire or cause it to spot ahead of itself. While winds cooperated overnight, gusts of 25 mph are expected this afternoon.

It’s been most challenging on the north edge of the fire in the North Zone. Yesterday fire was most  on Red Mountain where winds cast spot fires approximately one half-mile ahead of a portion of fire that had already spread over the perimeter. Last night firefighters were successful in that area tying in their lines together using a small firing operation as planned. Spotting behavior is still expected to occur today in a receptively dry fuel bed in the 1999 Bucks Fire scar. Firefighters are continually monitoring the area, both on the ground and by unmanned aerial systems (drones).

On the northeast side of the fire, containment lines are holding well. Firefighters plan to continue patrolling, while also backhauling equipment and initiating road repairs.

In the South Zone, containment lines held last night due to reduced fire behavior with cooler temperatures and lighter winds. Crews did have a very small slopover on the south side of the Little Grass Valley Dam, however, they were able to contain it. Firefighters will continue focusing on reinforcing fire lines from Minerva Bar south to the Pacific Crest Trail.

Structure protection remains in place for the Bucks Lake areas as well as La Porte and Little Grass Valley Reservoir.

The North Complex Fire has grown to 273,335 and considered 36 percent contained. There have been 15 deaths reported and 840 structures destroyed thus far, with the devastation coming in the West Zone of the fire. The West Zone can be defined by drawing a straight line from Big Bend (northwest portion of the fire) directly southeast to the Sly Creek Reservoir. For details on that portion of the fire go to  CAL FIRE Team 4 updates.

Though progress was made, the Plumas National Forest and all other California national forests will continue to be temporarily closed. Pacific Southwest Regional Forester Randy Moore based said that based on forecasted winds and the potential for new fire starts and spreading of the existing fires, he was signing new closure orders to extend for a week but would be assessing the situation on a daily basis.

Air quality will remain unhealthy throughout the area.

Evacuation orders for Bucks Lake and La Porte remain in effect. Twenty-four hour security patrols are being provided for the evacuated areas. 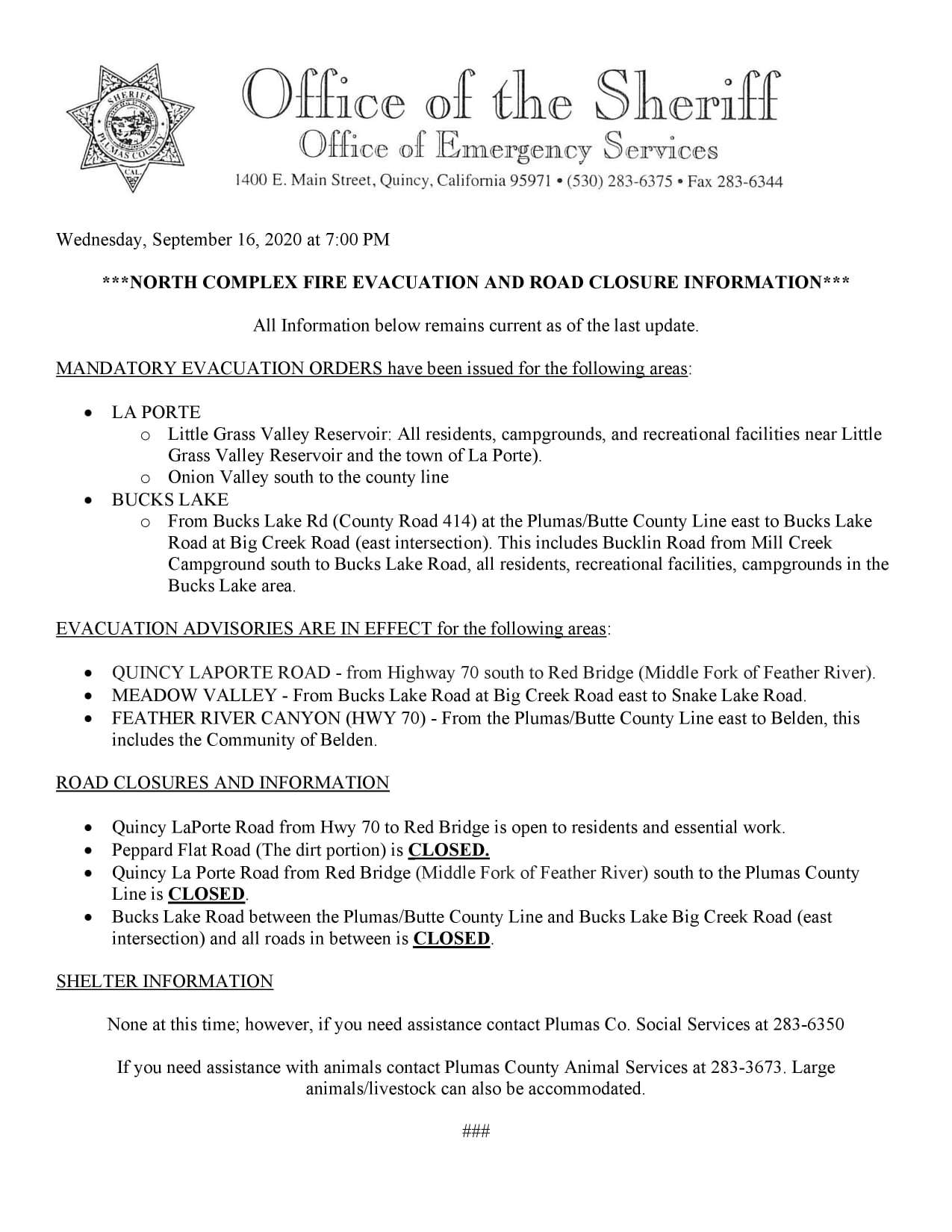