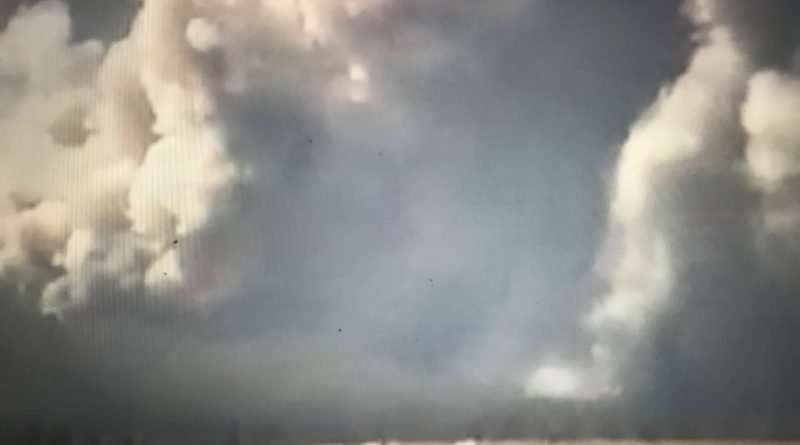 The southern edge of the fire experienced stronger then expected winds yesterday afternoon.  Firefighters had nearly stopped the eastern spread of the fire but a single stubborn slop-over stood in their way.

Firefighters were making a direct attack on the slop-over when the strong winds pushed the fire beyond their reach.  The fire ran for several miles and is now perched on the edge of the escarpment just south of Black Mountain and about 6 or 7 miles south of Milford.

Winds will be more westerly today and will be strongest along the escarpment.  Winds will align with some drainages, making rapid down-slope spread possible.

The incident fire behavior analyst is cautioning firefighters to be alert for fire whirls caused by erratic winds. Firefighters are expecting rapid rates of spread especially where the fire moves into lighter fuels.  Spotting is likely especially when the fire burns into pockets of timber.

Firefighters will continue fighting a very stubborn fire on the north end of the Dixie in Lassen and Shasta Counties.  On the northwest corner, wind direction will continue to be in firefighters’ favor as the fire continues backing towards fire lines.  These lines are being constructed to the west of the actual fire in locations where fuels, topography, and access give fire crews the best chance of success.  The Reading Fire scar, scattered meadows, and a favorable wind direction will help firefighters. Heavy fuels are slowing fire line construction and will continue to produce many spot fires.

Spot fires will be even more of an issue on the north east corner of the fire east of the Caribou Wilderness and north of Silver Lake where the wind direction is less favorable.  Firefighters have barely kept pace with the fire over the past few days.  They are hoping for more success today with help from slightly reduced winds speeds and a fire moving out of heavy fuels that are more prone to producing spot fires.  Firefighting efforts will also receive a boost from lighter fuels as the fire moves closer to Highway 44.

Highway 36 between the Highway 44 intersection and Westwood has been opened this morning.  A pilot car will escort traffic through the road construction so dome delays are likely.