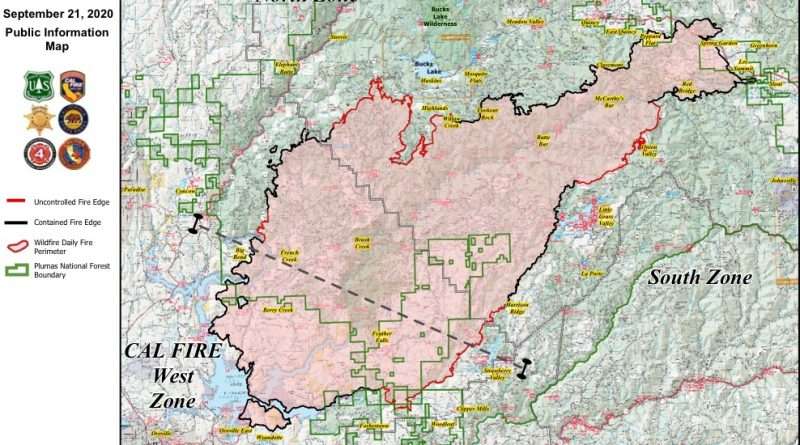 With containment numbers increasing daily and the perimeter strengthening around communities, all evacuees from the North and South zones of the North Complex Fire should be allowed to go home soon — that could mean a day or two for the residents of Bucks, Haskins, Little Grass Valley Reservoir and La Porte — but effective this morning Tollgate and Meadow Valley resident can go home. Those residents can return home, but remain under advisory.

The containment numbers on the North Complex Fire are slowly rising, reaching 64 percent as of this morning, with 294,301 acres burned.

After a few days of merely unhealthy or unhealthy for sensitive groups, Quincy and the surrounding areas are back in the very unhealthy territory.

On the south zone, planned night firing operations parallel to LaPorte Road did not take place last night as the window for favorable conditions diminished. Other ignitions that had taken place earlier yesterday were monitored throughout the night and patrolled with no significant changes.

Approximately 3 miles of containment line was added around Little Grass Valley, which is represented in black on this morning’s incident map. The day shift will attempt to carry out ignitions near the Pacific Crest Trail and along the dozer line parallel to LaPorte Road.

The eastern portion of the fire continues to hold within containment lines, though residual smoke from burning stump holes or heavy logs may be observed within the interior.

On the north zone, the night shift completed the ignitions along Red Mountain Road and today, resources will be monitoring and patrolling the line. Ignitions were not favorable for the night shift along Grizzly Big Creek, but the day shift will attempt firing operations later today.

With clearer weather yesterday, aircraft were available to assist ground resources with a few spot fires around Red Mountain Road. The constructed line through Grizzly Big Creek to the south of Grizzly Forebay was tied into previous line from the Bucks Fire back into Oro Quincy Road.

In the West Zone, the death toll on the fire remains at 15 and the count for damaged or destroyed structures has reached 1,887, which is nearing the original estimate of 2,000 structures lost. (All of the deaths and all but one of the structures are within this area.) Please see CAL FIRE Team 4 updates for more up to date information at: www.fire.ca.gov/incidents/2020/8/18/north-complex-fire/

The Bear Fire also broke out Aug. 17 following a lightning strike. Initially it was left to burn because it wasn’t immediately a threat to people or property; it was in steep, rugged terrain; and resources were scarce due to the fires burning across the state. So though it held at 50 acres for a while, it grew to over 12,000 acres and threatened the communities of Bucks Lake, Haskins Valley, Tollgate and Meadow Valley. An evacuation order remains in effect for all of those areas and structure protection remains in the area.