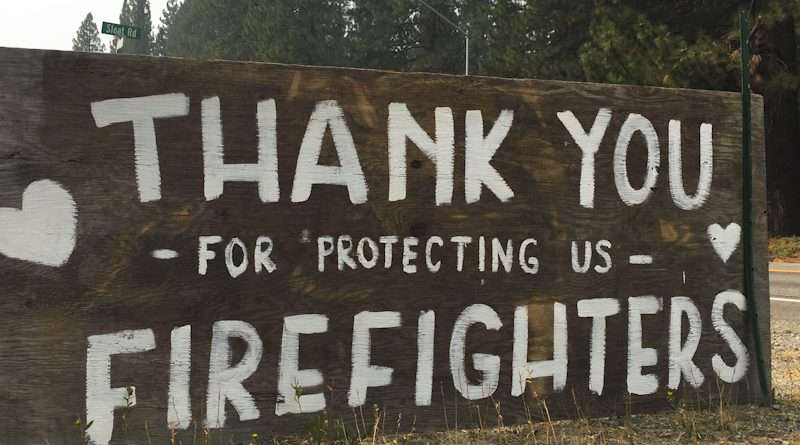 UPDATE 9:30 a.m. During this morning’s briefing it was announced that residents in the communities of Bucks Lake-Haskins and La Porte-Little Grass Valley Reservoir had at least another 24 hours of evacuation. The fire still poses a threat and yesterday afternoon and evening, spots and slopovers had to be picked up and contained. Jake Cagle, operations section chief for the North Complex, said that the Type 2 Team management team that takes control tomorrow is aware that the communities have been evacuated for a while, but everyone wants to ensure that the fire poses no threat before residents are allowed to return.

As this was his last briefing, Cagle thanked the firefighters on the ground for their work. He singled out the Plumas and Feather River Hotshots as two local groups who have fought the fire as well the local jurisdictions for great coordination. Cagle also thanked the community for their support.

Original story: This  is the last day for Jake Cagle and company (otherwise known as Type 1 California Interagency Incident Management Team 4) to lead the fight on the North Complex Fire. Today they will be working with a Type 2 Team (Rocky Mountain Incident Management Team Black) to make a smooth transition for the official switch at 6 a.m. tomorrow, Sept. 24. Plumas News and the community say a heartfelt “thank you” for the 21-day stretch of time they have spent fighting the fire and protecting our local communities.

The containment number on the North Complex Fire has increased to 75 percent as of this morning, with 301,401 acres burned. The damaged and destroyed structure count has risen to 2,086 (all but one property in the west zone). The death toll remains at 15.

Various towns and areas have been under advisory and mandatory evacuation orders since the fire broke out Aug. 17. As of now, only residents of the Bucks Lake-Haskins areas and La Porte-Little Grass Valley Reservoir remain under mandatory evac, but officials are poised to allow them to return home soon.

Yesterday residents might have been alarmed by the plumes of smoke visible on both horizons, but they were indicative of firing operations. UPDATE: There were also some spot fires and slopover areas contributing to the smoke.

On the south zone, firing was successful around Quartz Hill and Onion Valley as crews were able to reinforce containment lines. Resources today will be focusing on monitoring these areas and looking to pick up any possible spot fires. Previously established south zone containment lines remain secured.

Firing operations on the north zone in the vicinity of Grizzly Big Creek to Grizzly Forebay were very productive last night. Crews completed firing to just south of Grizzly Forebay, where crews will look to complete firing during today’s shift. All slop over fires and spots have been picked up and will continue to be patrolled.