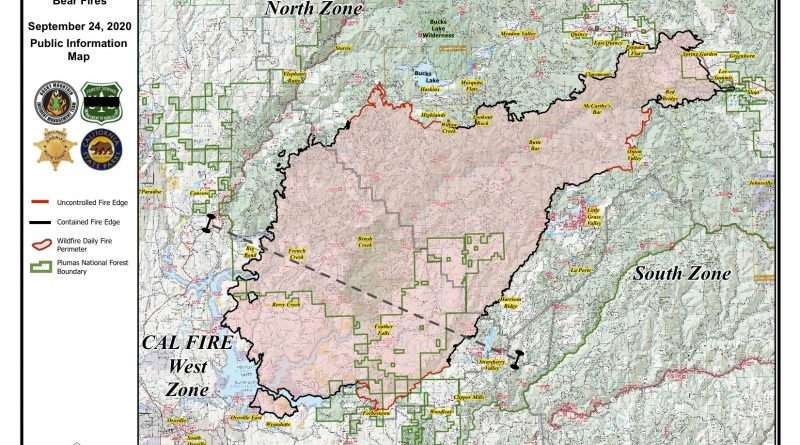 Update 8:15 p.m.: On the south zone, crews today continued to mop up containment line around Quartz Hill and Onion Valley with the help of a helicopter using heat detecting sensors to find hot spots. Area residents no doubt heard the reassuring sound of the helicopter making its runs. Resources tonight will concentrate in this same area to guard against any spot fires. The fire remained in its current footprint throughout the rest of the zone.

On the north zone, resources completed firing operations in the vicinity south of Grizzly Forebay. While there is now containment line surrounding the North Zone of the fire, unburned islands of timber continue to catch fire and create spot fires. Night crews will continue patrolling and mop up operations.

As the day crew came off the mountain tonight, they were greeted with enthusiastic crowds lining Meadow Valley, as well as Quincy’s Main Street.

Meteorologists, firefighters and PG&E are keeping close watch on this weekend’s predicted weather and its potential to spread or ignite new fires. For that reason, the Plumas County Sheriff’s Office issued a statement last night saying that while La Porte residents might be able to return to their homes in a few days, those in the Bucks Lake area might have to wait until the weekend weather passes. Some Plumas residents could also be facing another PG&E Public Safety Power Outage.

During this morning’s Forest Service briefing Casey Cheesbrough, the daily operations chief trainee for the Type 2 Team from the Rocky Mountains, said that spots continue to be an issue in the areas that remain a threat for the La Porte and Bucks Lake areas.

The containment number on the North Complex Fire has increased to 78 percent as of this morning, with 304,492 acres burned. The damaged and destroyed structure count has risen to 2,248 (all but one property in the west zone). The death toll remains at 15.

On the south zone last night, crews focused on the Quartz Hill and Onion Valley area picking up spot fires and conducting mopping up operations. Resources today will continue to concentrate in this area to reinforce existing containment lines. The fire remained in its current footprint throughout the rest of the zone.

Resources will be looking to complete firing operations in the vicinity south of Grizzly Forebay, should conditions permit in the north zone. There continues to be spotting adjacent to containment lines in the areas south of Bucks Lake, but crews have been successful in catching them all.

The Type 2 Rocky Mountain Incident Management Team Black took command of the fire at 6 a.m. this morning. Incident Commander Troy Hagan would like to thank California Interagency Incident Management Team 4 for the great work that has been done during their 21-day assignment. The public is is invited to come out and honor firefighters after their day’s work by gathering in Meadow Valley at 6:15 p.m. and along Main Street in Quincy at 6:50 p.m.