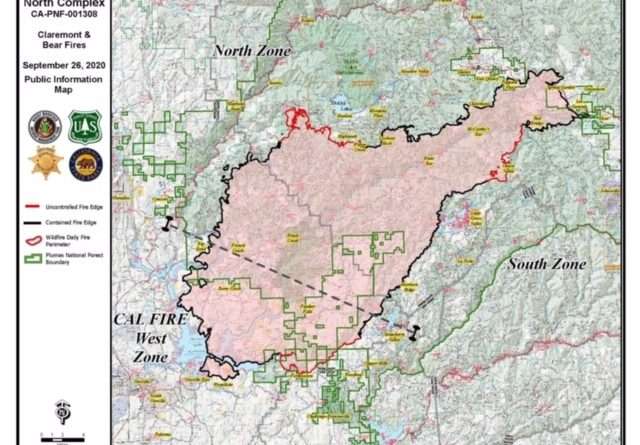 8:10 p.m. UPDATE: The containment lines held again today on the south zone and crews will continue to work tonight and tomorrow to reinforce the lines in advance of predicted winds.

Firefighters are finding members of the public inside the fire closure area. The public is being asked to respect the closures and stay out of the area for public and for firefighter safety.

Original Story: A Red Flag Warning goes into effect tonight for much of Northern California and PG&E is contemplating another public safety power shutoff that will affect residents in 15 counties, including many residents already impacted by the North Complex Fire. For now, it appears that those affected in Plumas County will the the residents in the La Porte area (already under mandatory evacuation). The shutdown is expected to begin between 6 and 8 p.m. tonight, Saturday, and remain in place through 8 p.m. Monday night. To check on your address go to https://pgealerts.alerts.pge.com/addresslookup/

The fire remains 78 percent contained as of this morning, with 304,881 acres burned. The damaged and destroyed structure count has risen again to 2,440 (all but one property in the west zone). The death toll remains at 15.

Crews reported few issues last night on the south zone as all containment lines held. Today, firefighters will continue preparing for the upcoming weather change by reinforcing containment lines, in addition to patrolling for spot fires. Crews successfully eliminated a large unburned “island” of fuel, thereby reducing a source for spot fires which reduces the chance for further spot fires across the fireline.

Firefighters are finding members of the public inside the fire closure area. The public is being asked to respect the closures and stay out of the area for public and for firefighter safety.

The weather forecast is calling for a change in wind direction and speed. This change in winds will test the recently completed containment lines as there are islands of unburned fuels continuing to catch fire and throw embers across the lines, creating spot fires. Firefighters will be focused on catching and containing these spot fires before they have the chance to become established.

For that reason, the Plumas County Sheriff’s Office issued a statement indicating that La Porte and Bucks Lake area residents remain under mandatory evacuation until it is deemed safe to return.