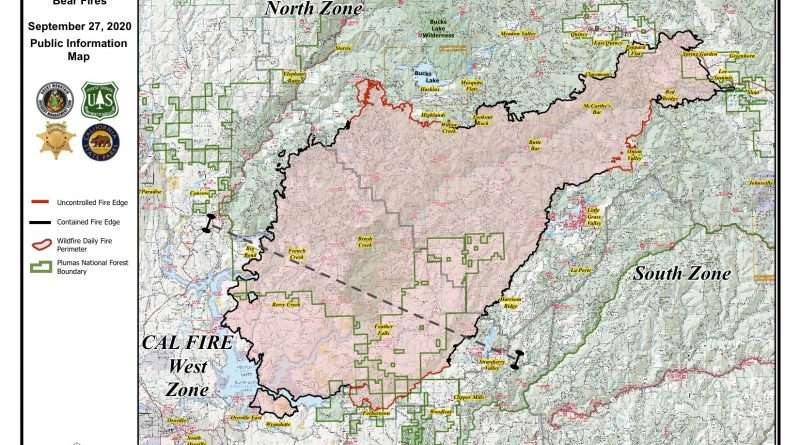 9 p.m. UPDATE: The Plumas County Sheriff’s Office has issued a mandatory evacuation order for a portion of the Feather River Canyon from the Plumas/Butte County Line east to Tobin due to the fire. This includes Tobin and Storrie. Use Highway 70. Those in need of assistance may proceed to Quincy High School where an evacuation assembly point has been established.

As of late this afternoon a spot fire is burning in French Hotel Creek, approximately two miles south of Grizzly Forebay, that is well established and actively burning. Resources including dozers, engines and handcrews will look at utilizing existing dozer lines from previous fires and building new fire lines in an effort to contain this spot fire. Other crews will focus on containing any other spot fires throughout tonight’s shift as winds are expected to be sustained at 15-25 mph with gusts of 40+ mph.

Winds gusting between 30-40 miles per hour have been reported in the north zone which has increased fire behavior in that area. Some spot fires have been reported, but firefighters are working to catch them before they become established and so far have been able to keep the fire within the existing footprint. The south side of the fire has not seen as much activity and the containment line is holding well.

Original story: The next 36 hours will be a critical test of the containment lines established on the North Complex Fire as a Red Flag Warning remains in place through Monday night at 9 p.m. and a high wind advisory is in effect until 2 p.m. Monday.

But so far, so good. The Forest Service is reporting that containment lines held throughout the fire overnight despite strong winds that reached 40 to 50 mph at the higher elevations. Crews will remain on alert today, prepared to deploy resources to any spot fires that could emerge.

The two areas that continue to prove the most problematic are the uncontained lines near Grizzly Forebay and from Onion Valley to Turn Table — the areas that continue to prevent residents from the Bucks Lake and La Porte areas from returning home. They remain under mandatory evacuation. Those areas are also part of PG&E’s public safety power shutoff, as well as a portion of the Feather River Canyon. To check on your address go to https://pgealerts.alerts.pge.com/addresslookup/

The fire remains 78 percent contained as of this morning, with 305,188 acres burned. The damaged and destroyed structure count has risen again to 2,471 (all but one property in the west zone). The death toll remains at 15.