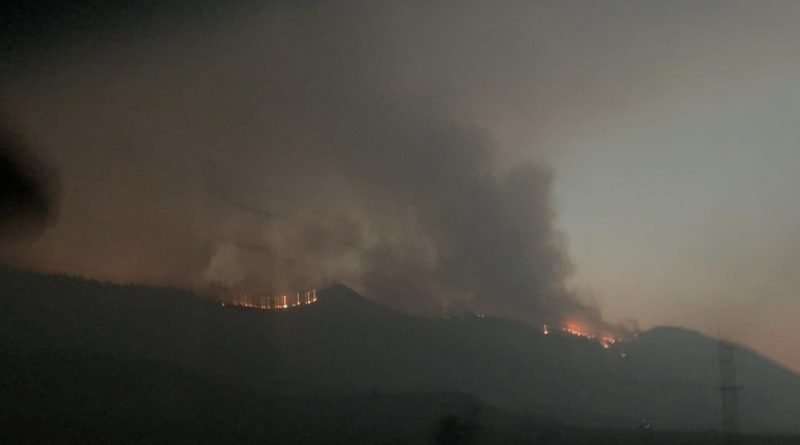 The southeast corner of the Dixie Fire is spreading along the top of the escarpment.  There was some movement down the escarpment last night but it is still a few miles from Highway 395.

The wind is expected to shift to more of an easterly direction later in the morning which should limit spread down the escarpment.  The potential for the fire to move downslope should increase later in the day as the easterly gradient winds holding the fire on top become lighter and heating in the Honey Lake Valley begins to pull the cooler air off of the escarpment.

Firefighters will be challenged today trying to hold the several miles of fire line extending from Turner Ridge to Dixie Valley.  Fuels in this area are very dry and the vegetation type lends itself to high rates of spread.  Shifting winds through the afternoon will produce spot fire keeping fire fighters very busy.

Crews are positioned this morning to keep the fire away from Milford, Herlong, and Doyle along Highway 395.  Crews are also preparing contingency lines to keep the fire from moving closer to Beckwourth and Portola.

The other area of interest to both local residents and firefighters is Grizzly Ridge. Grizzly Ridge lies just north and east of Highway 70 roughly from East Quincy to Cromberg.  Crews have constructed miles of fire line along the ridge and successfully kept the fire away from the Highway 70 corridor for the past several days.  That was no small task with the fire wanting to run up the steep slopes on the far side of the ridge.  The one thing the firefighters had on their side was the generally southwest winds were at their back helping to push the fire back onto itself as it hit the ridge top.

This morning those lines are expected to be tested by strong east winds for the first time.  As of 9 a.m.  the winds were still light, generally less than 5 mph.  They are forecast to increase to 10 plus mph with gust to 20 mph possible.   Any heat along the ridge top is a source of embers to blow spot fires over the fire line towards the Highway 70 corridor.

Additional help arrives today in the form of 10 hand crews of soldiers from Joint Base Lewis McChord in Washington state.  They will be joining the fire fight today, assisting firefighters in Genesee, Grizzly Ridge, and Clover Valley areas.

The northern portion of the fire will experience lighter winds today.  Torching of trees as the fire burns through pockets of heavy timber is possible, but spotting will be less than in recent days.

Firefighters will focus much of the mop up and patrol efforts today along those fire lines width unburned fuels on their western edge as east winds will test these lines for the first time today.

The Dixie Fire is 868,781 acres this morning.  That is an increase of 9,306 acres since yesterday morning.  Containment remains at 55 percent.