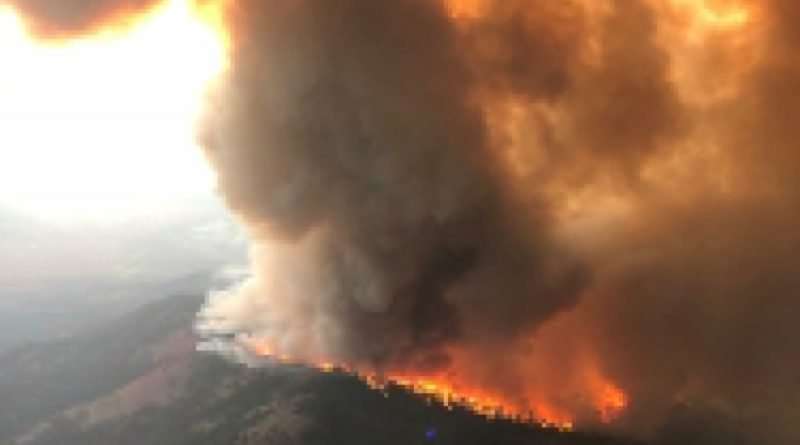 The fire made a run yesterday afternoon toward the south of Horton Ridge on the west side of Dixie Valley.  The fire was too intense and moving too fast for firefighters to stop.  Their plan was to make a direct attack as the fire behavior moderated into the evening.  The fire continued to burn actively well into the night casting an orange glow that was visible for many miles in the smoky skies.

Crews worked overnight to protect structures in Dixie Valley and build line, keeping pace with the fire as best they could as it progressed along Forest Road 01 towards Rose Canyon. Stopping the spread of this finger of the fire will be a high priority for firefighters today.

The fire has reached the dozer line at the bottom of the escarpment just south of Herlong Junction.  Favorable winds and a lot of help from airtankers in the afternoon helped to moderate the fire behavior.  Crews have built lines on either side and below the fire burning down the escarpment.  The dozer line between the base of the escarpment and the structures along the highway varies from 6 to 10 dozer blades wide according to East Zone Operations Section Chief Mike Wink.  Firefighters plan to “nurse” this fire as it slowly burns towards their lines.  There will be no firing operations according to Chief Wink.

On top of the escarpment, the fire is moving slowly to the south toward the Sugar Fire burn scar.   Fire lines are holding on the north side stopping any further spread to the north.

In Shasta and Lassen counties on the north end of the fire, activity was limited overnight to lower intensity ground fire as heavy fuels continue to burn.  The winds were strong enough to cause numerous spot fires near Highway 44 yesterday.  More of the same is expected today.

The fire continues cooling along Grizzly Ridge above Highway 70 between Quincy and Cromberg.

There is no change in fire burning in Devils Punch Bowl south of Taylorsville.

Residents are being allowed back into the Warner Valley north of Lake Almanor.

Interior islands continue burning throughout much of the fire area.  Needle cast is contributing to these interior fires.  The needle cast is the result of fire that burned many days or weeks ago killing trees and individual tree limbs.  The needles that were not consumed in the earlier fire are now falling to the ground and providing fresh dry fuel for the still smoldering hot spots.  The resulting flames are low intensity, but still enough to get the public’s attention and keep fire crews busy.

A high pressure ridge has settled over the area.  This will keep winds light and hold the smoke over the fire until possibly late in the afternoon.  This limits fire activity but also creates unsafe low-level flying conditions for airtankers and helicopters.

The light winds are a mixed blessing for fighters.  Safe and effective fire fighting tactics require knowing exactly what the fire is doing. Knowing which direction the fire will move is critical.

There are two forces that influence wind direction.  The first is the gradient wind; the larger scale movement of air between areas of higher and lower atmospheric pressure.  The second force is the up-slope dirual winds that develop through the day as the sun’s heat warms the air and causes it to rise; moving up-slope in a direction dictated by the topography.

Light gradient winds can be overcome by the diurnal winds causing rather sudden changes in direction.  And just as quickly, the direction can reverse itself.  Light winds are not usually a huge concern for fire fighters.  But the Dixie Fire has demonstrated that with fuels as dry as they are, even a light wind can cause very intense and fast moving fire. Changing wind direction can add to the challenge fire fighters face.