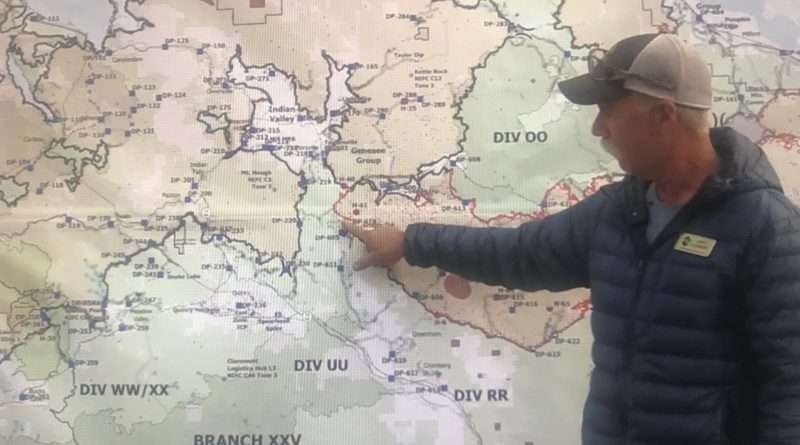 Operations Section Chief Jeff Surber points to the area of the Dixie Fire that has threatened Taylorsville and potentially East Quincy for weeks, but now firefighters are getting a handle on it.
News
September 9, 2021September 11, 2021 Editor

There was something missing from the skies over Plumas County today.  There were no angry smoke columns.  Drift smoke covered parts of the area, but there were more clouds than smoke.

The clouds are the result of an approaching frontal system that will pass over the fire area in the early hours of tomorrow morning.

The frontal passage is a mixed blessing, bringing with it the chance for some rain showers, along with stronger winds and possible thunderstorms.  The winds associated with the front are forecast to be up to 40 mph in exposed areas.  Outflow winds from the thunderstorms could be stronger and more erratic.

These winds are sure to test fire lines and firefighters alike.

So far, as the sun goes down tonight most of the fire area is calm.  The winds have increased along the northern and eastern portions of the fire.  Winds in excess of 40 mph were measured near the escarpment area.  So far those fire lines are holding.  There were some showers over that area shortly after the winds, bringing some hope and increased confidence to firefighters.

Fire crews continue to deepen the mop up efforts along fire lines around Dixie Valley.  The contingency lines south of Dixie Valley are all completed.

Fire lines to the west of Dixie Valley all the way to Grizzly Ridge are holding with very few hot spots.

The fire line along Grizzly Ridge from Spring Garden to East Quincy is cooling down nicely.  Fire managers expect to classify much of that line as “contained” if this weather system passes without any problems.

The fire in Plumas County is looking pretty good, but it is a different story in the northeast corner of the fire in Shasta and Lassen Counties.  The fire made a run yesterday, burning a few thousand acres.  By 9 this morning it became active again.  As of this evening’s briefing, fire managers did not have a good map of the fire.  They did say that it ran about 9 miles to the northeast and has crossed Highway 44.  At times the fire was moving 2 to 3 miles in an hour according to West Zone Operations Section Chief Tony Brownell.

The head of the fire is burning away from the Old Station area, but there is still a flanking fire that is moving toward the community in the northern end of the Hat Creek Valley.

A major fire fight has been in progress all day on the outskirts of Old Station and continues as the sun goes down tonight. Air Tankers supported fire engines, dozers, and hand crews all trying to keep the fire out of Old Station. They had major support from a number of airtankers and helicopters until the sun went down.

Wind speeds are likely to increase overnight presenting firefighters with a major challenge.  By morning, the winds will slow a little but still remain fairly strong.  The chance for lightning storms diminishes as the sun comes up tomorrow.

The Dixie Fire is now 928,741 acres, an increase of 6,234 acres since yesterday evening.  The fire remains 59 percent contained. 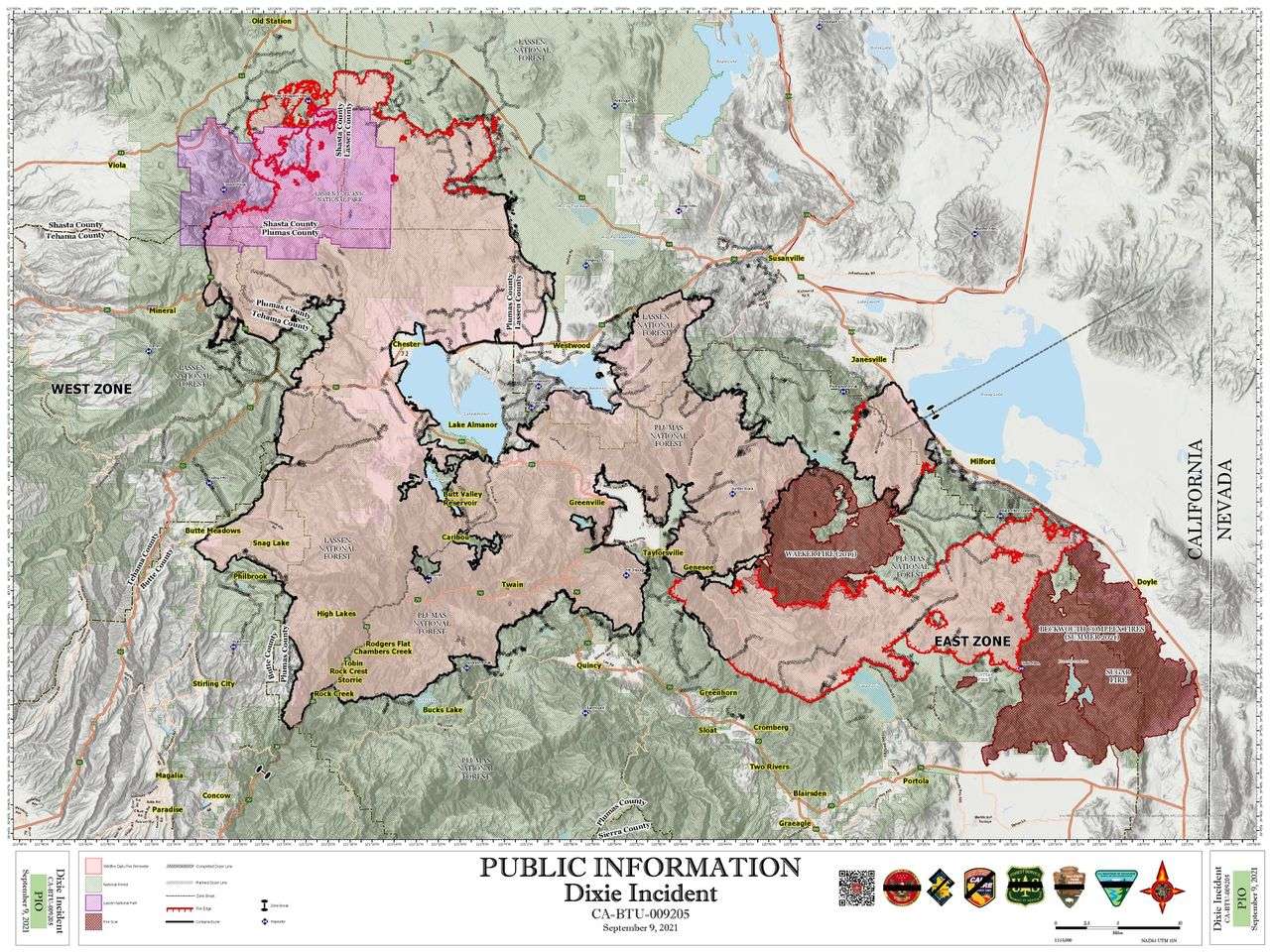 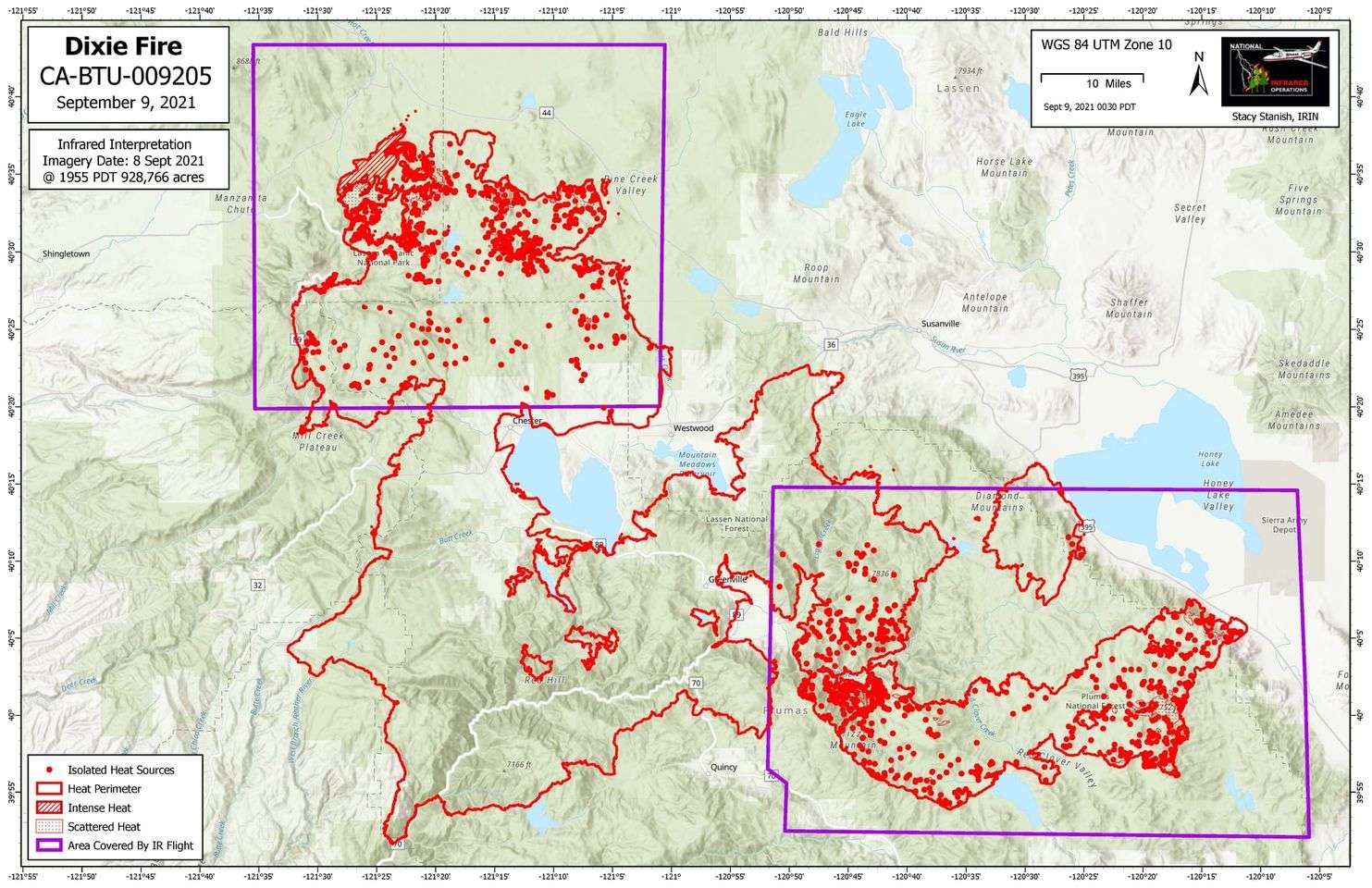