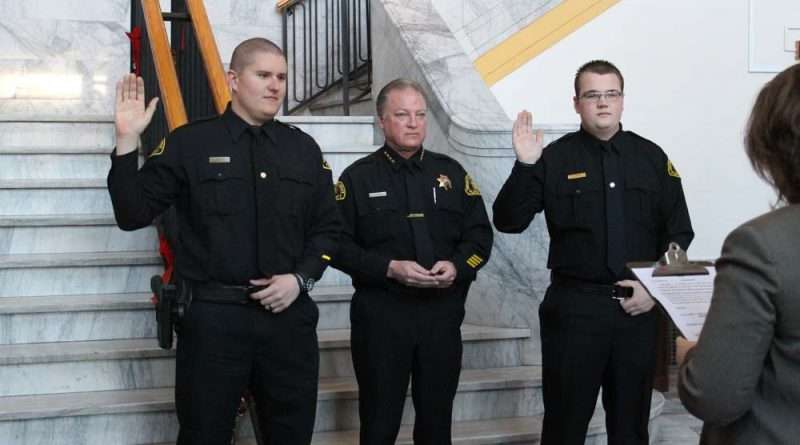 Tyler Grant, left, and Chandler Peay, right, are sworn in as Plumas County sheriff’s deputies during a Thursday, Dec. 31, ceremony at the county courthouse in Quincy. Sheriff Greg Hagwood, center, said he was “extremely proud” to see both men become deputies. “I remember when these, now deputies, were born,” Hagwood said. “I’m very proud of both of them.” Photo by Dan McDonald
News
June 16, 2016November 29, 2016 Dan McDonald

Just two years ago, the Plumas County Sheriff’s Office was facing a critical shortage of full-time deputies and corrections officers.

The situation was so dire that some outlying areas of the county literally didn’t see a deputy unless there was an emergency. And the response times were sometimes long.

The county jail was out of compliance with a federal consent decree because it didn’t have enough officers to safely operate the facility.

But times have changed for the better.

Thanks in part to a half-million dollars of additional funding approved by the board of supervisors in October, the sheriff is bolstering his staff.

After falling to a low of 10 deputies in 2014, the ranks have increased to 14. Sheriff Greg Hagwood said he expects to have 18 full-time deputies by this time next year, as well as six additional corrections officers at the jail.

“This is a significant increase that is going to be noticeable in our communities,” Hagwood said. “There will be better response times, more thorough investigations and measurably better service.”

“The board of supervisors deserve recognition for listening to their constituents and helping me be able to help their communities,” Hagwood said. “None of this would be possible without the board’s support. They have been supportive of the needs of the community and have given me the tools to meet those needs.”

Last week, two new deputies — Chandler Peay and Tyler Grant — were sworn in during a ceremony at the Plumas County courthouse. Hagwood said he hopes to hire three more deputies later this year.

Peay and Grant represent a continuing trend at the sheriff’s office — hiring people from within the county.

The two new deputies were actually promoted from within the sheriff’s office ranks. Peay was a dispatcher and Grant was an officer at the jail.

Hagwood said the emphasis on local recruiting and hiring has numerous benefits.

“We are hiring good people who know the communities they will be serving. They grew up here and want to stay here,” Hagwood said. “Our turnover rates have plummeted. The deputies are committed to living and raising their families in Plumas County.”

The sheriff said hiring and retaining local deputies also translates into “huge cost savings” for the county. “It costs a lot of money to recruit and train people,” Hagwood said.

The two new deputies were not only born and raised in Plumas County, they are both following family footsteps.

Peay’s father, Sgt. Steve Peay, is in charge of the sheriff’s investigations unit.

Grant is a third generation sheriff’s office employee. Both of his parents currently work in the department. His father, Mike Grant, is the deputy administrative sheriff. His mother, Becky Grant, is the communications supervisor.

Tyler’s grandmother, Pat McClellan, was a dispatcher and reserve deputy in the sheriff’s office from 1971 to 1989. McClellan, who lives in Georgia, was on hand Thursday, Dec. 31, to see her grandson sworn in.

The next step for Tyler Grant and Chandler Peay is the police academy. They are expected to begin fulltime deputy duties in late summer.

Hagwood said the sheriff’s staffing has almost returned to the level the department enjoyed in the 1990s.

He said that will translate into expanded duties for his office.

The sheriff’s office will take on more code-enforcement responsibilities. The sheriff recently negotiated a contract with the city of Portola to provide a deputy and community service officer for the city.

“The contract was twice as much as last year,” Hagwood said. “With those funds we brought on an additional position that serves the city of Portola exclusively.”

The sheriff also plans to begin code enforcement in Quincy, and has increased courthouse security as well as security at the courthouse annex.

Hagwood said he hopes to eventually restore office hours at the sheriff’s office to five days per week. The office is currently open 10 a.m. to 3 p.m., Monday through Wednesday.

“Our first priority is to have an active presence in the community,” Hagwood said. “The next priority will be keeping our office open more than 15 hours a week.”

Hagwood said remote communities like La Porte should notice an increased presence in the near future. La Porte residents pleaded for the sheriff’s help last summer following a string of burglaries.

Hagwood said he would eventually like to have a resident officer in that community. Until that happens, he said a deputy would patrol the area.

“La Porte is a perfect example of a community that has been victimized severely,” Hagwood said. “Having an officer scheduled to be there will hopefully be a deterrent. We don’t have a resident officer there yet, but we are getting closer.”

Thanks for the help

Hagwood stressed the importance that reserve deputies have played when staff levels were at all-time lows because of budget cuts.

Most of the reserve deputies are retired officers who fill in when needed.

“The reserve deputies have been huge for us,” Hagwood said. “They stepped up and really helped us out.”

The sheriff said he was equally pleased with the work of the search and rescue teams.

“Search and Rescue averages two to three rescue missions a week,” Hagwood said. “Those people save lives all the time. Most of them have other jobs, but they always respond when they are needed.”

“I’m pretty excited about the direction we are heading. We’re coming back strong,” Hagwood said. “I think 2015-16 will prove to be a period where we really recovered from staffing shortages — back to the way things were 20 years ago.”

Hagwood said his office will continue to do a lot of hiring this year. He said he is looking for deputies, corrections officers and dispatchers.

All of the positions require applicants to pass a stringent background check. “It’s a very thorough vetting process,” Hagwood said.

The sheriff encouraged anyone who would like to become a deputy, corrections officer or dispatcher to contact him or Assistant Sheriff Dean Canalia at the sheriff’s office.