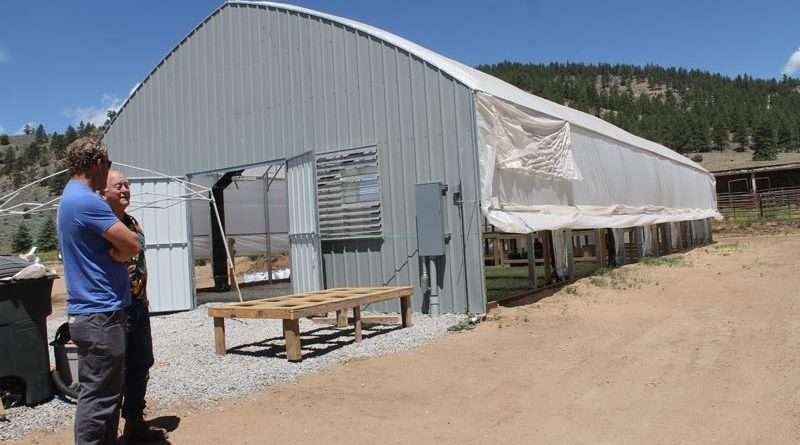 From left, Sean and his father, Kevin McInerney, discuss plans for the hemp crop and future expansion. The 30-foot by 70-foot greenhouse is where the plants grow to field readiness. By this time next year the McInerneys hope to have more, larger greenhouses on site.
News
July 10, 2019July 12, 2019 Victoria Metcalf, Assistant Editor

They’re not the THC (tetrahydrocannebinol) producing euphoric high in marijuana.

Hemp dreams come from the stress and worry over the investment and time put into growing the stuff and hoping to turn a profit — the scheme of attempting to have the land pay for itself.

It was a windy day when Kevin McInerney climbed into his son’s high, four-door truck. He said he was just talking to one of his workers, Gary Williams, who confessed to having hemp dreams.

Williams, who’s grown hemp in past years and knows well the failures that can happen, told McInerney that he found himself lying awake at night fretting. When sleep came, troubled dreams resulted.

McInerney, a longtime attorney, has had his share of restless nights and worries. The ones surrounding his new venture into growing hemp are nothing new, but the substance is far different from anything he’s encountered in the world of law.

As McInerney settles into the backseat, he repeats the two words “Hemp dreams” to himself.

Getting to know a little about what makes McInerney tick it quickly becomes clear he’s a man of many interests, even surprises.

There’s the life-like carving of an enormous grizzly that greets anyone entering through the basement door. It’s right there. Front and center. And there are the three thick-coated German shepherds that sniff around a newcomer’s feet. They’re rescues, McInerney said.

But he’s also rescued 15 wild horses that have the run of much of his 280 acres and the Plumas National Forest that abuts his land in many places.

He also has a herd of wild burros that make themselves at home, as well as a small herd of buffalo. He has pastureland, thick with alfalfa, and with a small, winding stream, picked out just for them.

Strays and things that need rescuing are just part of the man’s makeup. His son, Sean, who’s down from Boise with his children for the Fourth of July weekend, probably sums up his father best. As an attorney, McInerney has gone after Fortune 500 corporations who haven’t had their employees’ best interests in mind.

According to Sean, his father believes in doing right by people. In fact, he’s paying the seven hired hands who are working the hemp venture $35 an hour — a good wage in Plumas County.

The question seemed to take McInerney by surprise.

Seated in large, comfortable leather chairs around a big coffee table and in front of an enormous fireplace, McInerney took some time explaining why he chose the land for his retirement home and why hemp seemed to be a promising crop to raise.

For some reason, McInerney chose to move to Reno in 1992 to relocate probably his last law office. With his law degree from Yale, he’s worked in New York State before moving to California in 1970. He’s been in law, especially the federal system, for more than 50 years.

But it was landing in Reno that got McInerney interested in locating just the right property. That came in the 280 acres in Sierra Valley.

“It’s pretty,” he said about his choice. And that’s evident as the wide-open lands with the picturesque rugged mountains play out right there before McInerney’s living room windows.

But when the man was finished designing and then building his multi-storied home nearly atop a rocky, wild mountain; it seemed it was time to turn to the land and what it might bring.

It didn’t seem to take long before McInerney decided there is still money to be made in hemp  — especially the benefits people glean from the CBD (cannabinol) oil the plants produce.

As McInerney studied hemp, he got to know Gary Williams who would become a strong ally in the business.

Williams and his family had tried growing hemp in the past. McInerney was particularly interested in hearing of what went right and what went wrong in his efforts to grow the labor-intensive plants. “They had made mistakes,” he said.

And the really important part is figuring out the mistakes that others made and doing something different and hopefully better.

And in acquiring information, McInerney visited a seed company in Oregon to learn the ins and outs about seeds. He quickly realized it’s worth every cent to start with the best possible seed. “Substandard or sub par seed stock” has no place on McInerney’s land.

Sean nodded his head as his father talked, adding that with cheaper varieties a buyer can get mixed seeds including marijuana and male seeds.

Male seeds have no part in McInerney’s venture. Without the interference of the male plants, female hemp plants can grow to full maturity and then be harvested. Male plants die off after they’ve completed pollination, and they interfere with the more important job a female hemp plant has to do.

It’s possible for the seed producer to tell the difference between male and female hemp plants and that’s another reason McInerney is willing to pay more money.

And while McInerney was doing his research, he also hooked up with Glenn Miller, an agricultural scientist with the University of Nevada, Reno.

McInerney learned that in order to legally grow hemp in Plumas County, he needed to meet the county’s requirements. And one of those requirements is being securely linked with a recognized research program that works with hemp.

McInerney has spent hours learning from not just Miller but two other scientists linked with UNR. The trio includes one chemist and two agronomists. They regularly visit his farm and among other things are interested in what kind of soil is readily available, with different applications of amendments that can best improve McInerney’s hemp production.

The soil is extremely important for hemp production, he’s learned. The soil in Sierra Valley itself is less than ideal. Hemp sends its roots down about 3 feet and in the valley there’s a thick layer of clay that impedes its development.

McInerney’s land contains a lot of the rock materials that have disintegrated over the centuries and blown down from the mountains to create soil that’s better for growing plants like hemp.

At some point McInerney learned about a handheld analyzer, about the size of a cell phone, that’s he’s anxious to try out.

Sean said that the leaf of the plant is inserted into the analyzer and within about three minutes a host of information is available about the plant.

One comment the Plumas County  Sheriff’s Officers had last year during a cannabis hearing is that they can’t readily tell the difference between marijuana and hemp. Among many of its functions, an analyzer tells a person just what the plant is. McInerney said that the analyzer he purchased runs about $900 — to him well worth it.

The most important aspect of the analyzer for McInerney is that it tracks CBDs. It also gives him the correct amount of THC within the plant. This should be extremely low and isn’t enough to get someone high.

McInerney said that like so many things, there are different kinds of CBD oils. There are different strengths as well as varieties and some are just better than others. He is interested in the top of the market.

“Would you like me to pass this property on to you?” McInerney asked Sean, who happened to be seated on the coffee table at this point in the interview.

Sean’s owned and operated a tree growing company in Boise for the last eight years. He said he was excited and interested in the venture when his father first told him he was going to raise hemp.

Sean likes his trees, and many varieties are evidenced along the long driveway from the sand-packed road and then along the paved road to McInerney’s house.

It didn’t take much thought for Sean to say he’s interested. So along with the hemp business he will also get the large house where his father’s lived. “At the tender age of 76,” McInerney said he is going to build himself another house somewhere on the land.

There are some logistics to work out, Sean indicated. Although his oldest daughter just graduated high school, he has three other children in elementary school.

And then there’s more to learn in catching up with the hemp business, although McInerney has made a lot of plans and he and Sean have clearly talked.

For instance, McInerney began with a seed-starting greenhouse. Right away he met difficulties with Sierra Valley’s strong winds. The solution seemed to be to submerge the bottom quarter or so below ground. Sean said he was there a few months earlier helping feed concrete into thick strips to form walls between the earth and the actual greenhouse.

And then McInerney picked out his first large greenhouse. This one is 30 by 70 feet and includes a heating system, fans, lights and watering system. There are plenty of tables throughout the area where trays of seeds rest under lights before they’re ready for planting in the soil.

McInerney said he has plans for more, larger greenhouses to stand nearby.

And then there’s the riding arena. McInerney said that the couple that have operated it are about ready for retirement. At that time it will be converted into a drying shed for the hemp crops.

And the board of supervisors has told McInerney that any processing needs to be done on industrial zoned land. Therefore he’s looking over what’s available along Highway 70.

And brother James, who lives in San Diego, will handle the marketing. Conveniently enough, that’s his specialty. And he’s good at it.

McInerney scoffs at the notion that he could be running a marijuana cover-up outfit. There’s little profit in growing marijuana now. The market’s flooded with it, he said.

Growing hemp and focusing on the CBD oil is where the money still remains, he explained.

Perhaps he’ll branch out someday. Hemp, after all, is very versatile. It’s used for making rope, in clothing, used as milk and is found in foods and other products.

In fact, hemp is thought to be one of the world’s earliest plants cultivated for textile fiber. It’s been discovered in ancient Mesopotamia dating to around 8,000 BC. It’s also been uncovered in early China.

Hemp dreams and the worries about what can go wrong with his first crops aside, McInerney is hoping to make his own history with a successful venture in Sierra Valley.