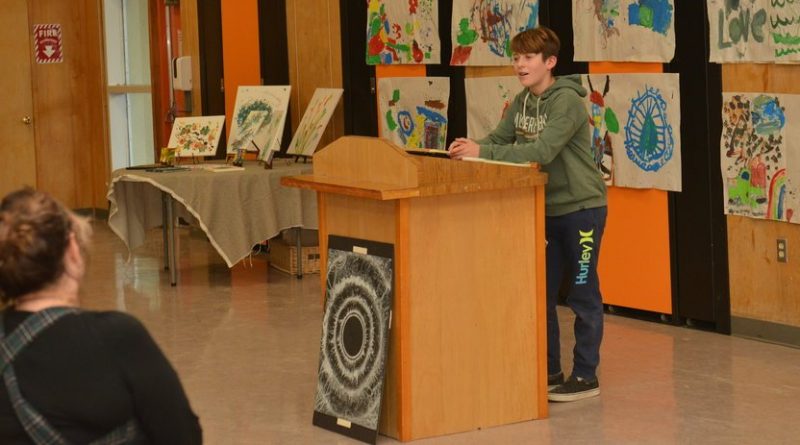 There’s a first time for everything, and this last Saturday, students from Indian Valley, Quincy, and Greenhorn treated an Indian Valley audience to an early evening of original prose and poetry as well as hand selected published works by other authors to share with a small audience of literary and student enthusiasts at Greenville Elementary School cafeteria.

The students wrote and read about life after the Dixie Fire, teenage life after COVID, and what it’s like growing up today from their perspective. It was, in many respects, a window into life adults may not quite know, and it was universally appreciated by the audience.

Adin Lunder wrote haikus about living life during Dixie in Indian Valley and beyond. Finn Linford, formerly of Indian Falls, shared three works, one by a local poet, and one really heart felt eye-opening work he wrote himself.

Jakodi Gallagher of Quincy wrote a prose piece using Greek mythology’s Pandora’s box as a base to describe the lives of teens in Plumas County—with hope still being at the bottom of the box. The audience could be heard making choked-up sounds at the end.

Sisters Jamison and Kiena Rose Van Pelt of Greenhorn delivered a poignant mix of poems depicting life now, the former weaving her own writing in with two published pieces by other authors and the latter delivering three original pieces.

All the performances were so different, but so strong and powerful remarked several people who were in attendance. The students will each receive $100 for their performances thanks to a generous donor (there had been a contest but it was impossible to rank the performances by the judges as they were deemed all so different and all so good).

Along with the theatre performances, was an art show featuring Joanne Burgueno’s photographs from the Dixie Fire Stories Project, which had previously had a show at Plumas Arts in August.

“Not a lot of people from Greenville have actually seen the photographs in person,” said Burgueno. She, along with editor Sara Gray, have interviewed more than 75 people about their experiences during the Dixie Fire and its aftermath. They will eventually be collecting the photographs and interviews for a book to be published perhaps in 2024.

Mrs. Johnson’s first-grade class contributed painted posters for the exhibit on the theme ‘paint what makes you happy.’ So event goers were treated to a colorful wall of student art. Ms. Johnson’s class practices mindfulness to lift each other up and the practice has helped calm students and made the classroom full of friends.

Local artist Lynda Bridges recent work was on display as well. She just started back up doing her string art paintings—event goers got to see her first post fire productions.

Levi Mullen, who was on hand to play music on his guitar through out the evening, also contributed one of his recent works for the audience to see, and it was placed prominently in front of the speakers’ podium.

Local award-winning journalist Jane Braxton Little read an excerpt from a new essay which will be published in the HeyDay Books anthology, Red Flag Warning: Northern Californians Living with Fire. Margaret Elysia Garcia read a couple of poems from her poetry memoir Burn Scars. The popular chapbook just went into a second printing and is available at B&B Booksellers, Plumas Arts, and Crescent Country.

The Silver Linings Reader’s Theatre and Gallery Show was a culmination of a year-long project to bring arts and arts therapy into the county and specifically communities that were decimated by the Dixie Fire. Pachuca Productions last year was able to acquire grant funding from North Valley Communities Foundation, Bread for the Journey, and California Humanities for the project, which brought arts and arts therapy to students K-12 in Indian Valley. Arts therapist and longtime resident Carol LaPerle (who lost her home on hilltop drive to the Dixie Fire) was able to work with students from the grant funding last spring.

Pachuca Productions concentrated its efforts on bringing the Silver Linings event forth from that effort with unending support from Plumas Arts to make it happen.

Audience members of the evening expressed interest in having a similar storytelling/reader’s theatre event annually.