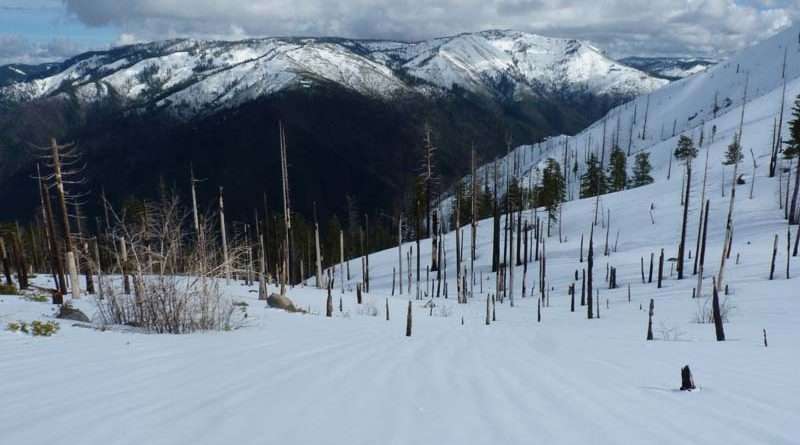 The Forest Service says it takes seven hours up to the peak; so, this is a full day adventure.

That is, if you make it. The trail is steep, in places obscured by brush, and only lightly used.

Therefore, if you hike this trail you will almost surely be on your own. Hikers need to be in great shape, skilled in mountain navigation and be prepared for all eventualities.

At the end of March, the trail was obscured by snow above 4,500 feet. Beyond a sharp ridge at approximately 6,000 feet, avalanche danger loomed.

There were tracks from only one other hiker on that Saturday, and he or she didn’t even make it that far.

There is a great overlook of the river, Pauls Point, located at 3,854 feet, or about a fourth of the trail miles to the peak. The trail was clear to this point.

The trail starts in the midst of beautiful ferns and moss alongside Chips Creek at the creek’s confluence with the Feather River. The trail then climbs amongst beautiful burned snags, but with little shade, most of the way.

Past Pauls Point, the trail travels up steep ridges with wonderful views that just keep getting better the higher one goes.

The trail is located on the southwest side of Chips Creek just past Belden on Highway 70, approximately 25 miles downstream from Quincy. The trailhead is marked with a large Forest Service sign.

Although the name Ben Lomond Peak makes it sound like it was named after a guy named Ben, “Ben Lomond” actually means “beacon peak” in Gaelic.

Ben Lomond is the name of a famous mountain in the Scottish Highlands that can be seen from Glasgow.

The Scottish mountain is named in the popular folk song “The Bonnie Banks o’ Loch Lomond.”

The name Ben Lomond has been given to several peaks in former British colonies: Australia, Canada, Jamaica, New Zealand and the United States, including our own Ben Lomond closer to home.

And I’ll be in Scotland a’fore ye,

But me and my true love will never meet again,

‘Twas then that we parted, in yon shady glen,

On the steep, steep side o’ Ben Lomond.