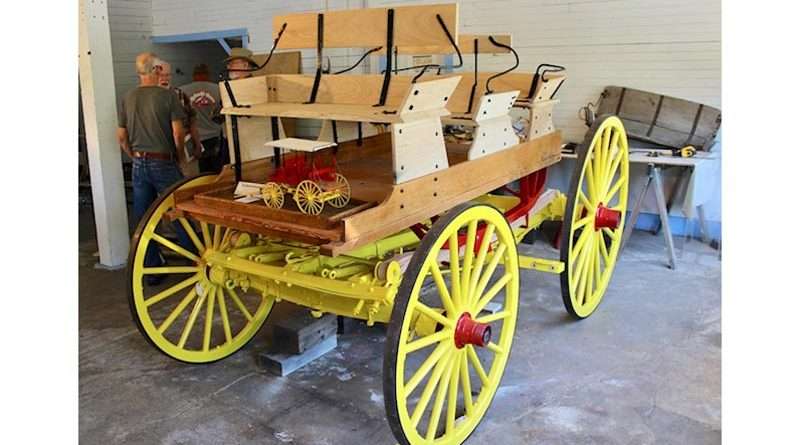 After the work of volunteers in a span of three years, the stagecoach has been restored to at least parade-ready use. Photo submitted
News
July 4, 2018July 12, 2018 Maggie Wells, Staff Writer

When you see the Hardgrave stagecoach rolling down Main Street in the 4th of July parade in Taylorsville, take a moment to appreciate how it got there.

Three years ago in the fall of 2015, the coach was rolled out delicately from a spot of yard next to the Indian Valley Museum in Taylorsville to the old Indian Valley Creamery building where it remains for now.

In the years in between, most parts of the coach have been restored and most of it has been repainted.

On Saturday, June 23, the stagecoach was reassembled by over 25 volunteers who came together to put the floor of the coach, the seats and the wheels back on.

The coach was made by W.L. Hamblin whose great-grandson and great-great-grandsons Jim and Dick were there to be a part of the celebration (and to put one of the wheels back on).

Descendants of J.A. Hardgrave, who owned the coach, were also on hand to help (Gordon and Scott Hardgrave).

Much of the wooden parts of the coach mechanisms had to be replaced. Mike Banchio made many of the replacement parts for the coach.

Teryl Schwartz, project coordinator, led the assembling of the coach and remarked on what a strong group effort the three-year process was to restore the vehicle.

Not all is finished — there’s still debate as to whether to paint the seating to match the original or to let it stand as is in its beautiful, natural form.

The coach was donated to the museum in the 1970s, prior to that it sat deteriorating in a field for the better part of 50 years.

“There’s lots of talented people in this valley who helped put this together,” said Schwartz. The volunteers, mostly retirees, have made this their pet project. Their determination shows.