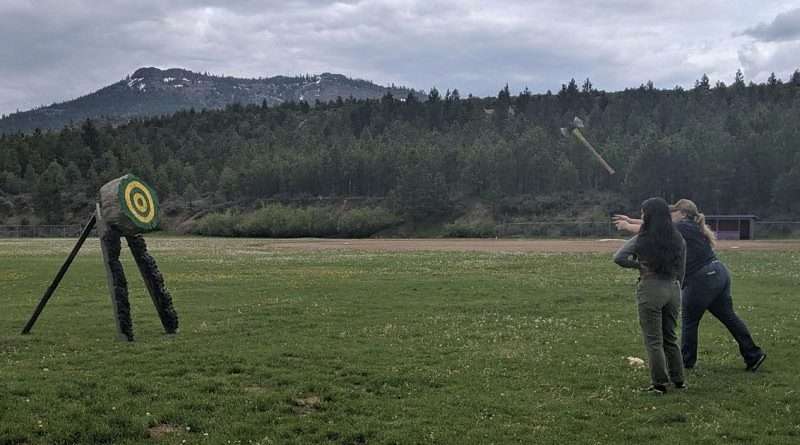 The sounds of a chainsaw biting into a log filled the gymnasium at Portola Junior/Senior High School on Friday, May 24, with 15 members of the Cal Poly Loggers sports team in attendance, along with two members of the Humboldt State University logging team.

The Cal Poly Loggers are an intercollegiate, student-run team of both male and female students interested in learning traditional forestry field skills. This includes competitive events such as double bucking, birling, axe throwing, horizontal and vertical chopping, and chainsawing.

“We are happy to be here, and it is in large part due to the efforts of Rob Wade, Outdoor Education Coordinator at Plumas County Office of Education,” Sheridan said. She explained the purpose of the logging team, and how those interested in exploring different career paths might not have considered logging and related forestry and agricultural fields.

“Rob Wade really wants to get local kids more involved, active, and outdoors in the forested areas here,” Sheridan said. “This demonstration is to help generate interest in a potential logging club for the students at Portola High School.”

Team members gathered around their equipment in the center of the gym, which included a log round strapped to a stand, a toothy double-ended crosscut saw, axe and chainsaw. Loggers prepared their tools as Sheridan explained the different types of competitive logging events, and team members rotated through the demonstrations.

Two young men worked together to demonstrate the double buck, where a crosscut saw is utilized by two of the same gender and a third person straddles the log, applying WD40 to the saw and wedging the wooden “cookie” slice that is being cut off.

Students cheered as the loggers moved through the log at top speed, with Rachel Wehrman saying that the sport was a good way to get to know people.

With a loud call to “Stand to your timber!” Sheridan led the demonstration to the Jack and Jill event, which is similar to double bucking, except the duo on either end of the saw are a male/female team.

Also demonstrated was horizontal chopping, with Logger Ian Wilson standing on a log that was placed in a metal frame and chopping downwards. Wilson showed off chain mail foot covers, explaining that the chain mail was required for team members during the potentially risky activities of sport logging.

“We wear chain mail on our feet for protection,” Wilson said. “We try to maintain a certain level of safety.”

Sheridan showed off her skills as well, taking her place on the log with axe in hand, swinging downward in calculated, strong chops to quickly cut the log into two pieces. The packed room of students clapped and murmured, many saying that they hadn’t thought of logging as a sport until this event.

Students also had a chance to check out the Loggers’ axe throwing skills at an outdoor target, with many opening eyes wide as CPL members discussed stance and swing, throwing full sized axes through the air to stick firmly in the target.

The assembly and demonstration were decidedly a success, with students chattering about newly sparked potential about the logging club.

Wehrman said of the assembly, “Overall, I thought the assembly was great. Our team was able to demonstrate some of our events and talk about how being a part of the team has helped us to grow and learn. I think the students were very interested and hopefully we can open a new pathway for students to get outside more.

“As many people know, one of Rob Wade’s many goals is to create a sense of pride in being mountain kids, and I think that a high school level team would definitely help move this idea forward.”

Wehrman went on to explain that there is more to a logging team than people think, and a lot to learn. “Being a part of the Cal Poly Logging team, I have learned both hard and soft skills that will help me in any occupation I pursue. I think that having a high school level team would allow for a deeper understanding of the forests that surround our community through a very fun and creative group environment. Rob, Erin, and I are looking forward to helping students get involved and see where this goes!”

The enthusiasm generated by the men and women of Cal Poly won’t go to waste. According to Wade, student signups reflect the impact the demo had, and the high school’s construction instructor Ben Harston has volunteered to move the project forward.

“Part of the Outdoor Core Mountain Kid (OCMK) programming I develop and coordinate for PUSD is having learning and growth opportunities that reflect the rural, Sierra Nevada character and context of home. At Portola High that would include our work with Dave Valle to bring archery as well as the Fire Science class in partnership with the Plumas National Forest,” Wade explained. “Like the Quincy High School Lost Sierra Composite Mountain Bike Team, we see this as ultimately being inclusive of all four PUSD high schools. It has to have a home and PHS was the right place.”

Wade delved into the connection between the alumni that came to the school with the logging team and this project, saying, “Rachel Wehrman and Erin Sheridan, PHS alumni, are now leaders at Cal Poly SLO in Logging Sports and Forestry and were perfect ambassadors and prodigal daughters to help us get this going. I’ve stayed in contact with Rachel since high school since natural resources is her focus and goal. We hatched this idea and luckily PHS was open to exploring.”

Wade explained that a Logging Sports Team and Forestry Club is right up the proverbial alley of OMCK. “It reflects our mixed conifer forest homeland and also the logging history and culture in Plumas County. SPI and Collins Pine are major employers in the industry and there are many silviculturists employed by the Forest Service and working independently in the region.”

Wade encourages students to look ahead to the logging adventures to come. “The 2019-2020 school year will bring an exciting new opportunity for students,” Wade closed.