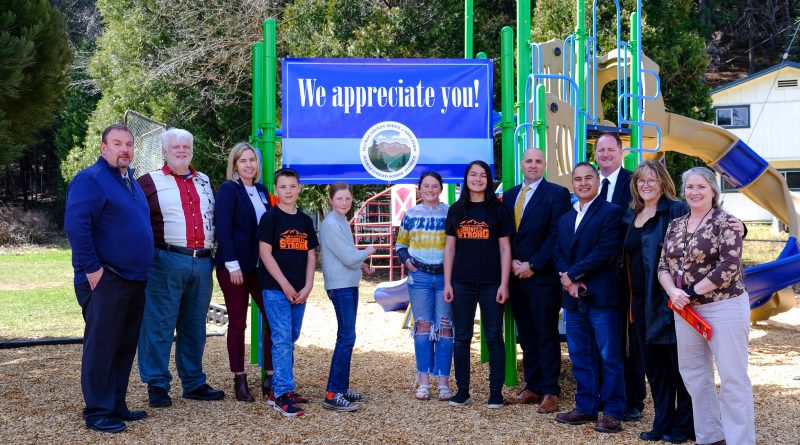 Students, staff, administrators, and the local governing board member from Plumas County Office of Education and Plumas Unified School District gathered with representatives from the California Department of Education (CDE) to celebrate the arrival of a new playground structure with a ribbon cutting ceremony on Friday, March 18.

Juan Mireles, Joe Anderson and Jake Wolfe of the state’s Disaster Services Team were invited to the ceremony in appreciation for all they did to assist the school district in the wake of the Dixie Fire last summer.

Mireles, Anderson and Wolfe were instrumental in helping to coordinate resources from CalOES, FEMA, and other agencies, as well as reminding the county office of education and the school district of the necessary steps to follow in the recovery process. Through their efforts, air scrubbers were quickly acquired for Plumas Unified and Plumas Charter School. This team represented the school district and county office of ed with the California Department of Education, State Board of Education, Cal OES, FEMA and Governor Newsom, regarding the field act waiver. They also assisted Plumas Charter School with the process of acquiring portable classrooms for their Taylorsville campus.

Back on Sept. 27, 2021, Wolfe joined state Superintendent of Public Instruction Tony Thurman on a visit to Plumas County to view the destruction caused by the Dixie Fire and to share the first day of school for the Greenville Elementary students in their temporary home at Taylorsville Elementary.

As a result of a press release asking for donations issued by Thurman following that visit, the school district received $10,000 from Californians Dedicated to Education Foundation, and $10,000 from Home Depot Foundation for Plumas Unified playgrounds, due to losses incurred from the Dixie Fire.

All three of the CDE Disaster Services representatives said they appreciated seeing how students and communities were recovering from the traumatic events the team was originally brought in to help with.

Principal Nicki Rodriguez told the assembled crowd how excited and happy the students were with the new equipment, which became evident after the ceremony as the playground filled with the sound of children’s laughter.