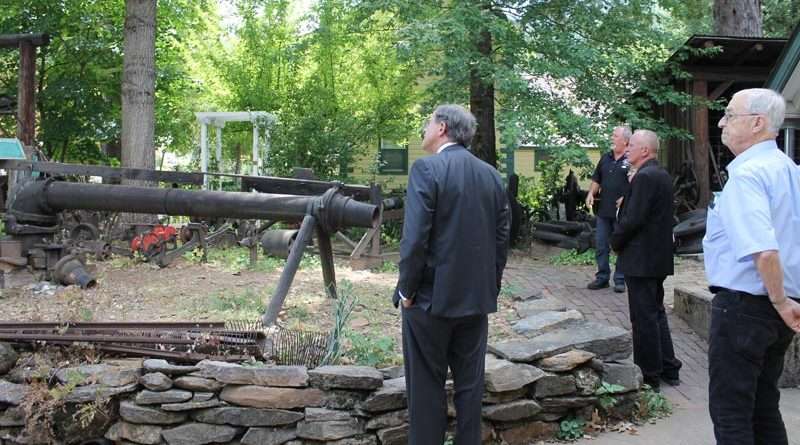 Touring the outdoor displays at the Plumas County Museum, Scott Lawson explained how the museum came to get some of its artifacts. These water cannons once used in local hydraulic gold mining were at one time on display at the fairgrounds. A past fair director decided to get rid of a lot of the artifacts they’d collected. Lawson said they missed opportunities to save some things, but they learned that these water cannons were going to be thrown out and the museum found a place to display them.
News
August 21, 2019August 20, 2019 Victoria Metcalf, Assistant Editor

Maintaining the integrity of the Plumas County Museum requires a gentle balance.

While new landscaping, paint and carpeting are welcome additions — keeping the county’s past for future generations is foremost.

Three of four members of the Plumas County Board of Supervisors, county counsel, county administrator and clerk to the board joined members of the museum association and museum Director Scott Lawson for lunch and then a quick tour of the facility Aug. 6.

Bill Coates, an association member and former county supervisor, addressed those assembled up and down a large table in the facility’s main room. Amidst reminders of the past explained, Coates said, “This has always been a hands-on museum.” What he meant is that public donations and the work of the volunteers make the county museum what it is today.

“Everything in here is yours,” he said. It’s all about families of the past and present to preserve for future generations to enjoy, explore and learn from. Housed securely in the museum, the mementoes and artifacts technically become part of the county, but it is the job of the small staff and volunteers to arrange and preserve it all.

The board of supervisors wanted a museum, Coates explained about the museum’s beginnings. Prior to that treasures were on display in the courthouse in glass cases. But they wanted a specific museum where the county’s rich past could be displayed and more importantly preserved.

And then a resident — Stella Fay Miller — bequeathed the county a legacy that built the main museum. She didn’t leave the county enough funding for operations and that’s really how the county became more involved, Coates said.

Funding the museum has come from the county’s general fund. But it’s the work of volunteers, trustees and public donations that brings much more to the facility.

It started when a past board of supervisors accepted the Miller legacy, had the original structure built and then others worked to gather the displays of historically rich items seen inside and out of the facility today.

“There are over one million items,” in the Plumas County Museum’s collection, Coates told those assembled. They include artifacts, photographs, and much more that go into showing the “historical culture of our county.”

“It’s a story of our founders coming together,” Coates explained. It’s the story of individuals and families having something they treasure and want to see others continue to enjoy and learn from.

“They trust us enough to have it here,” he added about these family heirlooms.

Over the years, the museum’s leadership has focused on compartmentalizing the treasures into related displays.

There’s a large collection of colored bottles arranged on specially built glass shelving in one prominent display. One of the wide front windows is the perfect place for allowing sunlight to reflect off the glassware in its various shapes and sizes.

Supervisor Kevin Goss, who is also the pharmacist and owner of Village Drug in Greenville, admired some of the collection. Indicating one of them he told Lawson he had one like it in his collection.

And as Lawson indicated various indoor collections, he pointed out the Maidu collection in one area, and taxidermy in another. Some of the stuffed animals and birds date back 150 years, he said.

Within one of the glass cases is a display of antique rifles and other weapons. There’s also a bank box believed to have belonged to the infamous Black Bart who robbed stagecoaches in the mining regions.

There’s the Chinese collection representing the large population of men and women who ventured to the gold field as miners, laborers and shopkeepers. In 1880, 25 percent of the county’s population was Chinese, Lawson said.

And then there are the photo panels Lawson motioned toward. These contain photos from various areas of Plumas County and are also divided into topics. Logging, ranching and mining are some of those subjects. Lawson said that they’re very popular with the public.

In more recent years the museum was able to add on to house its extensive archives and collections. Here are pieces of the old courthouse, snow skis and old-fashioned sleds. Bells, candlesticks, gadgets and much more are tucked away in areas not normally open to the public.

There are also shelves of boxes holding individual and family histories, photos, letters and more that have been organized for posterity.

When someone comes into the museum and wants to know about a particular person or family, the staff can retrieve it right from the stacks. Referring to the county’s first Forest Service employee, the records reveal information that not even family members are aware of.

Outdoors there is a mining display, an old cabin, a blacksmith shop and much more to entertain adults and children alike.

The gold mining trough and the blacksmithing shop come to life during the annual educational opportunities that fourth-graders throughout Plumas County get to enjoy, Lawson reminded guests.

Although the fully restored Coburn House is worth a tour and presents an opportunity to step back into the 1880s, each floor revealing how a family would have lived, Lawson said there is only one volunteer available to give tours through the home on Saturdays.

Although lunch was leisurely, the tour for supervisors was rushed so they could return to the courthouse, right across the street, and attend to the early afternoon session.

This year Plumas County Facilities Services managed to remove evergreen bushes from the museum’s front. Landscaping will be added. The facility will receive a coat of paint and new carpeting is planned. Lawson said that he thought the existing carpet had been there as long as he has been coming to the museum. Lawson, who is a native of Plumas County, probably toured the facility as a child and began working there in the 1980s.

“I love this museum,” said DaForno as she looked around. “I have to come over here to walk around,” she added about how she spends an occasional break or lunch hour.