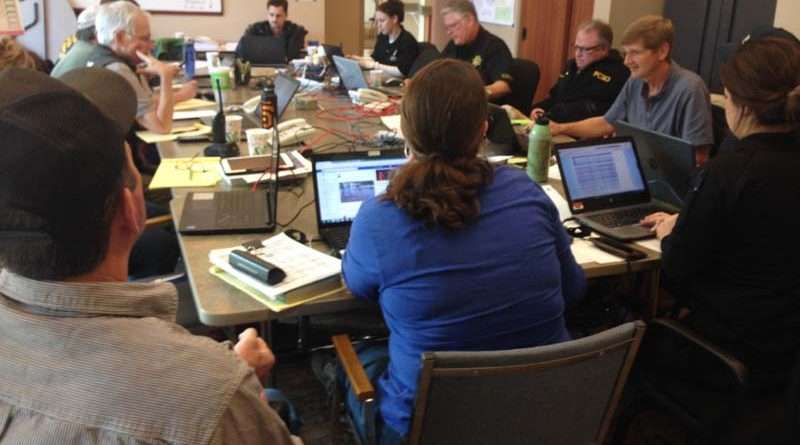 County leaders gather Saturday, Feb. 11, at the emergency operations center in Quincy to assess the state of the county following last week’s storms. Others were available by phone and reported on their areas of responsibility throughout Plumas. Photo by Debra Moore
News
February 17, 2017February 15, 2017 Debra Moore, Managing Editor

With highways closing and communities flooding last week, Plumas County declared a state of emergency and asked for help from California’s Air National Guard and its Office of Emergency Services.

The help arrived none to soon. Just a couple of hours after the Air National Guard helicopter arrived Friday, Feb. 10, it airlifted an 81-year-old Taylorsville man to safety after he was swept into flood waters. (For the full story see the front section of this newspaper.) Another helicopter delivered 15,000 sand bags to Portola on Saturday.

Also on Saturday, a five-member team from the state’s Office of Emergency Services arrived and met with county leaders and emergency personnel to assess the damage.

“This is an area we’re really concerned about and we wanted to provide extra attention to one of the areas being impacted the most,” said Eric Lamoureux, who is responsible for 31 counties as the regional administrator for OES.

The team will provide support, assist with damage assessment and help the county prepare for the next round of storms expected this week.

During incidents such as last week’s storm, a second-floor conference room at the county’s courthouse annex becomes the emergency operations center, and the site where officials gather for briefings. And since some areas of the county were physically cut off from the remainder, others reported via phone.

The main trouble spots were Highway 70 through the Feather River Canyon, as well as just west of Portola, and Highway 89 south and north of Greenville, and in Clio.

As this newspaper went to press, the Canyon remained closed due to flooding. During the Saturday briefing, CHP Commander Sarah Richards reported that portions of the Canyon were completely unstable and Caltrans was still assessing the damage. For a while, residents were stranded in Twain, but by Friday afternoon could travel to Quincy.

Highway 89 from the Greenville Wye to 3 miles south of Crescent Mills reopened Sunday afternoon, but as this newspaper went to press there was still one-lane controlled traffic north of Greenville. Motorists are to expect delays.

Indian Valley residents were stranded entirely for a time last week when 89 closed in both directions. But by Friday, Caltrans was able to open Highway 89 north of Greenville to one-lane controlled traffic.

Highway 89 at Clio also reopened over the weekend.

Highway 70 just west of Portola remained open with one-lane controlled traffic last week, though it threatened to close many times during the storm and its aftermath. It is now open without controls.

Roads throughout many of the communities were closed at times during the storm. More specific information is available in each newspaper. As this newspaper went to press, some residents of LaPorte Road were unable to access their homes due to a washout under the roadway.

Over the weekend, several houses in Indian Valley were only accessible by boat. It was a similar situation near Graeagle, where the river rose at the Plumas Pines Golf Course and flooded several condos.

Joe Blackwell, representing the county’s public works department, said his crews were working on drainages throughout the county and trying to reopen roads as soon as possible.

Throughout the storm, the area health care districts worked together to ensure access to emergency care. The ability to provide medical evacuations was one of the reasons why Sheriff Greg Hagwood, as the county’s emergency services director, asked for a helicopter. For a time, patients in Indian Valley who needed emergency care, couldn’t be transported by ground ambulance.

Plumas District Hospital in Quincy stationed one of its ambulances in Graeagle in the event Highway 70 to Portola closed.

Greenville residents were instructed to refrain from washing clothes or any other activity that would further impact the community’s sewer system.

In Eastern Plumas, the community services district in Delleker received numerous calls about a “boil water” rumor. But that’s all it was and residents were told that the water was safe to drink.

Plumas Unified School District canceled classes throughout the entire district Thursday, Feb. 9, and again on Friday, Feb. 10, except for Chester.

Hagwood said that Chester and the Almanor Basin were the least impacted by the storm, while Indian Valley and Eastern Plumas bore the brunt of it, with Quincy and American Valley also being hit.

“There was very little impact in the Basin,” echoed Joe Waterman, the area’s fire rescue coordinator. He said that sandbags and a Red Cross trailer were available if needed.

Hagwood said his office was flooded with 911 calls and the CHP responded to multiple calls from people asking about which routes were open.

On Friday, Feb. 10, the sheriff released a statement that read, “No essential communication losses have occurred and all agencies are working closely together to bring more information as it becomes available.”

There are several spots in Indian Valley where the tracks washed out and crews from Burlington Northern are working to replace them.

County Assessor Chuck Leonhardt, with assistance from a state team, will begin assessing the damage this week. There is no estimate yet of what the total will be.

Another storm is expected to hit the county this week bringing more rain and snow. Though it’s not predicted to be as intense as last week’s weather, it could still inflict damage.

“What normally wouldn’t have a significant effect, could be different this time because we already have a damaged infrastructure,” Hagwood said. He mentioned roadways and water treatment facilities as two prime areas of concern.

During the 24-hour period ending Friday, Feb. 10, at 9 a.m., this is the precipitation that fell in inches according to the National Weather Service: