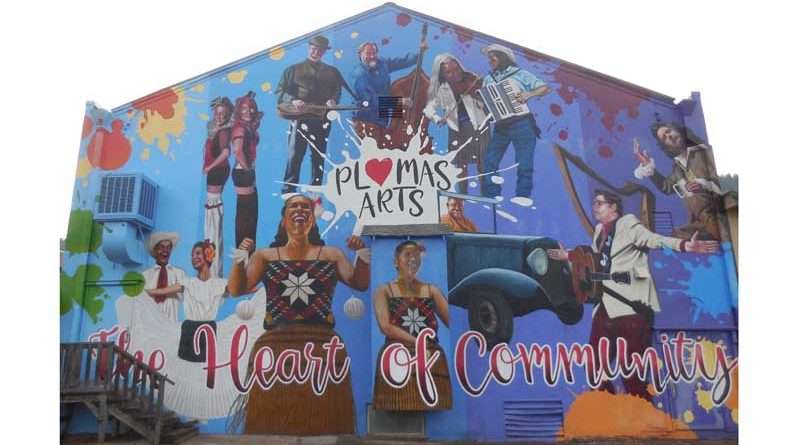 “The Heart of Community” describes the efforts of Plumas Arts in bringing artistic expression to Plumas County and is on display in this recently completed mural on the back side of the Town Hall Theatre in downtown Quincy. Photo submitted
News
January 12, 2018January 10, 2018 Staff

The idea of a mural on the back of the Town Hall Theatre has been around since before Plumas Arts first purchased the movie business from Gary Patton in 1989.

The process of making that dream real took flight when muralist Rafael Blanco, who had been hired as the art instructor at Feather River College, came to the attention of Plumas Arts.

In September 2016, a grant application was written to the National Endowment for the Arts. A few months later when the award was given, Plumas Arts staff began the process of gaining approval from national and state offices of historic preservation to validate that the proposed mural would have “no ill effect” since it was built in 1936, even though the building has not been designated as a historic site,.

“Working with muralist Blanco, the design process went through numerous iterations. In initial phases, it was imagined that the design would capture historic scenes of the facility’s use, the faces of the many who have supported the theatre (over the nearly 85 years of its history) and the artists and arts supporters who have helped to make local arts such a significant part of the quality of our lives,” said Plumas Arts Director Roxanne Valladao.

Over a period of months of trying to make that work, photos of individuals were collected and considered. “It became clear that what we had wanted was going to be “too many and too much” for a single wall — even this 50-foot wide by 35-foot high one,” commented Valladao. “The greater issue became that regardless of how diligent an effort we made to be comprehensive, more deserving individuals and groups would be left out than included. That sad fact was going to defeat our intention to be inclusive.”

The muralist intervened at this stage with valuable lessons on public art and design, telling Plumas Arts that not everyone was going to be pleased, many would have an opinion about the work, and that it was the job of the muralist to create something universally understood and beautiful.

Once that arduous decision was reached, the design was brought before the Plumas Arts Board of Directors and the Plumas County Planning Commission’s Design Review Committee for final approval.

Preparing the wall for the mural involved weeks of repairing leaks and failing stucco on the massive back wall of the theatre. To get that job done, and the mural painted, involved an impressive assembly of scaffolding – five tiers at the peak. Scaffolding was generously loaned, for several months longer than originally anticipated, by Bertocchi Masonry, Glover Construction and Feather River College.

Blanco began painting in late summer and continued through fall with a work schedule that had to accommodate the birth of his son, family visits, two other mural commissions, a return to teaching, rain, freezing temperatures and icy scaffolding planks. No complaints though. With his earplugs putting him into a trance of sorts, clothes covered in paint, he was always a charming ambassador engaging passers-by, visibly happy to be doing something he repeatedly offered he “loved doing.”

The now-completed Town Hall Theatre mural presents a symbolic representation of performing artists, both local and from around the world.

Ken Cawley, Barney Harchis, Leslie Mink and Kenny Davis are the rambling fishy quartet across the apex. QUIRCUS stilt walkers Lindsay Davis and Nikki Hall stand alongside Ballet Folklorico Dancers of Veracruz Mexico. Poi dancers visiting from New Zealand’s Kahurangi Maori Dance Theatre take center stage. Patrick Ball as Turlough O’Carolan (who returned for a performance Dec. 8) and Antsy McClain (scheduled to return to Quincy for a concert July 28) occupy the right side. In the center of it all is a fitting tribute in a portrait of Wells C. “Captain Carl” Clark whose legacy lives on in his extraordinarily generous bequest to Plumas Arts and dozens of entities in Quincy and Meadow Valley.

“This has surely proven that good things — in this case a thing of beauty — are worth waiting and working for,” added Valladao. “The Town Hall Theatre mural has transformed a once-lifeless wall in an alley that no one ever noticed into a defining asset to downtown Quincy boasting the tagline “The Heart of Community.”

One thought on “The story of the Town Hall Theatre mural”