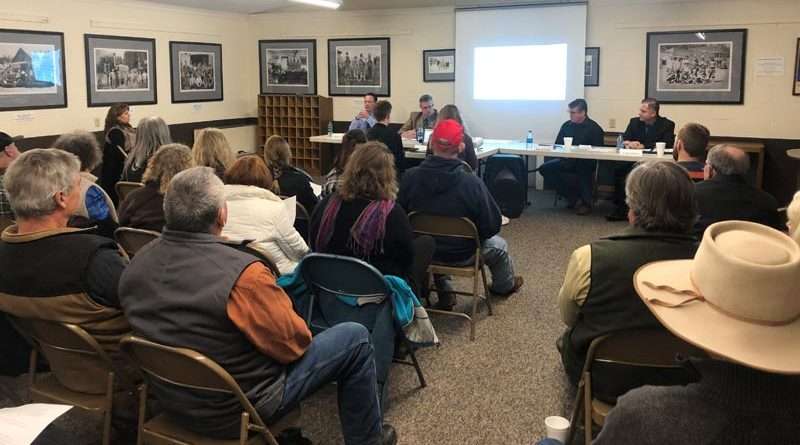 The second part of the program afforded the public an opportunity to pose its own questions via student curators.

The first question centered on the economy and cited the 2016 CalTrans county economic forecast which identifies Plumas County as one of the most vulnerable counties due to a stagnate economy and declining population. Each of the participants seemed familiar with the report and agreed with its findings and projections. Although each had different ideas about how to best reverse the trend.

Goss hopes to capitalize on the effort to reduce fuel in the forest to both create fire resilient communities, but also attract industry such as biomass companies. Grant views our aging population as a challenge that needs to be overcome by attracting younger families to the area to strengthen the workforce.

Shannon sees tourism as a primary means to overcome the issues, using The Silver Buckle Rodeo that draws hundreds from outside the county as an example. Shannon argued for more and bigger events to draw tourists. Shannon also argued we need to do a better job of keeping our youth in the area once they grow up.

Cameron saw the primary antagonist as the state with its regulations and taxes as placing an unfair burden on rural communities.

On the subject of unemployment, each of the participants felt that there are enough jobs, but that there is a segment of the population that is either unwilling or incapable of holding those jobs.

Grant noted that unemployment trends could be deceiving in Plumas County due to seasonal occupations.

All the candidates agreed we need to work to help people develop the skills and traits necessary to hold the jobs available today.

Cameron again highlighted the perceived strains placed on businesses by the state as preventing small business owners from providing the wages that might attract families.

Regarding communications, each participant saw the need for high-speed internet as paramount to addressing the county’s communication issues.

Each participant also believes if we can overcome this challenge, it will help draw younger families looking for a more bucolic lifestyle, while enabling them to work remotely.

Grant proposed the construction of towers that could be leased by carriers to deliver wireless broadband.

On the topic of drug addiction, the students highlighted our past number of deaths related to drug overdoes compared to our current numbers which indicate a positive trend, but wanted to know what could be done to further reduce the current threat.

Goss highlighted programs and policies that were enacted under his tenure and advocated for the expanded use of Narcan (a medication that blocks the actions of opioids).

The other participants argued for a balanced approach that rested on a firm law enforcement presence coupled with compassionate programs to help people overcome their addictions.

The students, candidates and members of the public that attended were professional, civil and completely engaged in the democratic process. It was a welcomed evening and one that reminded us how fortunate we are to live in an area where we can still have responsible, respectful and thoughtful dialogue.