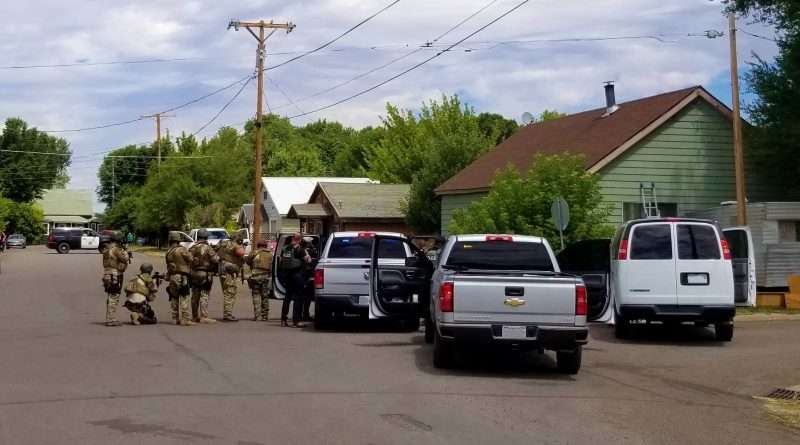 Officers gather prior to the arrest of suspect Aaron Walter who barricaded himself in a Loyalton residence. Walter is on parole for homicide and was wanted in conjunction with a domestic violence incident in Plumas County.
News
August 6, 2019August 8, 2019 Editor

Walter, who is on parole for a previous charge of homicide, was wanted in Plumas County for a domestic violence incident that occurred July 28. Walter was also wanted by the California Department of Corrections for being a parolee at large.

Members of the California Department of Corrections and Rehabilitation Fugitive Apprehension Team initially contacted Walter in Loyalton, but he barricaded himself in a residence at 702 First St.

Several members of the Plumas County Sheriff’s office, including numerous SWAT team members, responded to Loyalton where they met other assisting agencies including state officers, Sierra County Sheriff’s deputies and the California Highway Patrol. Shortly after their arrival, Walter was taken into custody without further incident.

Walter has been transported to the Plumas County jail.