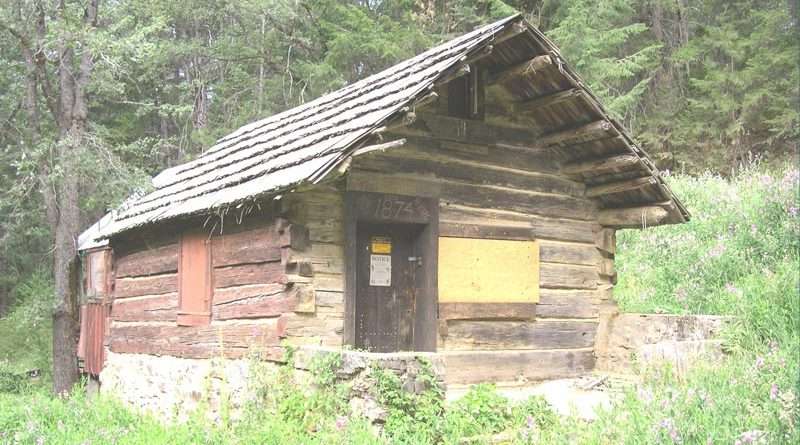 This photo was taken in 2016 showing how the old Swiss cabin looked for many years. Many generations of the Piazonni family have enjoyed the cabin. Photo submitted
News
August 6, 2018August 3, 2018 Victoria Metcalf, Assistant Editor

There’s no evidence that one Swiss-Italian gold miner struck it rich in the Seneca region. However he did leave behind a legacy for future generations with the mine he established and a cabin he built.

Battista “Babs” Piazonni, attracted to the gold fields of California with dreams of striking it rich, left his native Switzerland in 1867. With him were members of his Swiss-Italian family and his older brother Christopher.

“The Piazonnis appear to have come directly to this remote area above the North Fork,” explained Dan Elliott, Heritage Program manager for the Plumas National Forest.

How and why they decided to try their luck on what was popularly called North Fork for many years seems to be lost in the mists of time. But it appears they were determined to locate a claim and founded the Swiss Mine that is still with descendents today.

The Swiss Cabin, as it’s known, is now the focus of a HistoriCorps and PNF restoration project in its early stages. This phase of “preservation is to buy us more time,” Elliott said.

Mining on the North Fork

“Gold was discovered in the Seneca area along the North Fork of the Feather River as early as 1851,” Elliott explained about this particular region and its rich mining lore.

As with many areas at the time — Rich Bar, Nelson Creek and scores of others — a settlement of makeshift cabins, tents and basic commercial ventures — bars, a store, perhaps a hotel or boarding house — sprang up to meet the needs of the miners and the area of North Fork proved no different.

A narrow trail, just wide enough for a man and his burro or mule, was the only way to reach the remote area even in the 1860s — at least 15 years after gold was discovered in this region of the Sierra. “A settlement quickly developed along the river becoming the commercial and social hub for the many mines that developed throughout the area,” Elliott explained.

When Plumas County was established in 1854, this northernmost township was called Seneca. It would be a number of years before the area itself became known as Seneca, with miners and others still commonly calling the area North Fork.

In 1902, a post office was established in the area and with it came the established name of Seneca.

Elliott explained that this was a busy area for mining. The nearby Dutch Hill mine was very active in the 1870s. “A great many smaller claims were worked — and re-worked — through the years,” Elliott said. “And there was a considerable population of Chinese miners active in the area during the late 19th century as well.”

The cabin and mine were about 2 miles west of what would become Seneca. It is where the Piazonni brothers staked their claim.

Settling on a spot along Owl Creek, initially the brothers probably lived rough, while mining took the upper hand. Both placer and hard rock mining took place on the claim.

It’s unknown whether they built two cabins or shared just the one at first. Dates conflict about the actual year the Swiss Cabin was erected. “One source indicates that the surviving log cabin was constructed in 1869, while a wood sign above the door suggests a starting date of 1874,” according to Elliott.

Local materials were used in building the structures the men needed. Trees were felled, possibly by ax, and the rounded edges were squared off for a more secure fit. Mud or clay, also probably found nearby, could have been used to fill the gaps.

Cedar shakes for the roof were hand-split and of an interesting design, Elliott said. Their width and length were unusual for the time. But they seemed to keep the cabin dry for years.

It’s known that several cabins were built in the area. Some were for residential purposes and others for the mine. A blacksmith shop near the mining tunnel that was upstream from the existing cabin was one of the important structures. “Evidence of these other structures could still be seen when the area was first surveyed as a historic site in the 1970s and 1980s,” Elliott explained. “But little remains obvious now aside from the cabin itself.”

Babs never married, but Christopher took a Mountain Maidu wife. Her name was Jennie and she came to the claim to live with him.

She was the daughter of Big Meadows Bill, a leader or headman of the Big Meadows Maidu, according to Elliott. He came to live on the claim, too.

Considering Big Meadows Bill’s status at the time and that he chose to live near his daughter is an important link in a shared history between miners and the Mountain Maidu, Elliott explained.

Big Meadows Bill didn’t choose to share a log cabin with his daughter and her husband. It’s believed that he constructed one of the traditional semi-subterranean houses somewhere near the cabin.

Elliott said they’ve attempted to locate signs of where that dwelling was located, but time or road construction might have eliminated it.

Elliott said that a PNF map once showed its location, but over the years the map was lost. He said they even took retired forest archaeologist Chuck James to the area to see if he could remember its location, but the landscape had changed enough that he couldn’t be certain.

It’s reported that Babs told his family that he didn’t want to die and be buried at the Swiss Mine. But that’s just what happened. He died in 1926 while working the tunnel and was buried just outside. “His grave can still be seen there today,” Elliott said.

“While the Piazonni family has a long history at this place, the property was never patented,” Elliott said.

In 1905 when the Plumas National Forest was established, the Swiss Cabin became part of it. “But Battista Piazonni and, after 1926, the Piazonni family continued to keep a mining claim here,” he explained.

At various times the cabin was updated. A second room was added to the back of the cabin. This structure was not built of logs.

There is a loft that could be part of Babs’ original structure or it could have been created at another date.

At some point, possibly in the 1930s or 1940s, maybe even a little later, a concrete step and rock work was added to the front entrance to the cabin. The foundation along the high side of the cabin was also rocked. Elliott said that work is probably what saved the cabin and kept it from rotting into the ground — common with so many old structures.

While Owl Creek, just down the hill from the cabin and probably easily accessed in those early days, was undoubtedly the source for water for the Piazonnis, a later conduit to another water source was carried to the cabin from uphill, Elliott explained.

There was electricity in later years provided by a generator. With the exception of a bed and a storage cupboard, most of the belongings had long ago been removed from at least the cabin’s front room. An ancient water heater, however, was left behind on the back porch.

“The Plumas National Forest recognizes the unique historic context of this site,” Elliott said. “Very few hand-hewn log cabins from this era survive on public land. For these reasons, the desire is to preserve this excellent example for future generations,” he added.

Many examples of early rustic architecture have disappeared on the Plumas. Some have been victims of time, others destroyed when the federal government saw many relics of the past as blight and didn’t consider their historic significance. Many of these structures were destroyed in the late 1970s and 1980s. A few others have been destroyed in wildland fires.

One problem Elliott and his counterparts on the Mt. Hough Ranger District saw with the Swiss Cabin, was that its roof was failing. This would allow more of the elements inside and a faster decay of the cabin would continue.

And with funding to cover the costs of a new roof, Elliott was able to attract the attention of trained personnel and volunteers from the HistoriCorps program. Their efforts are helping the PNF buy more time so they can decide what they want to do with the cabin and come up with the funds to do it.