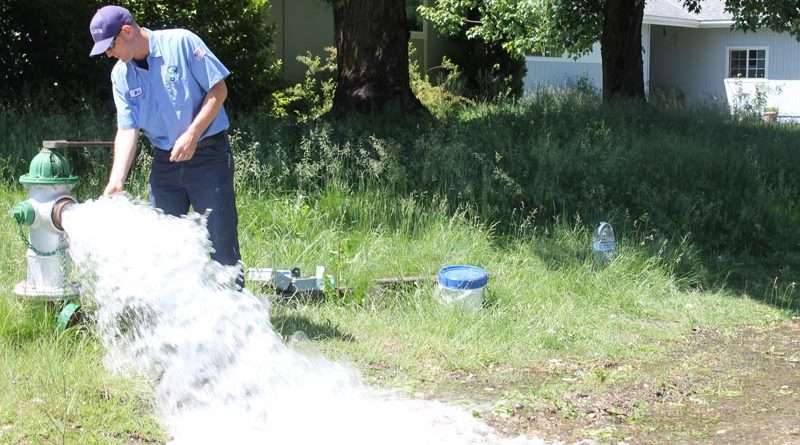 “I think I’m still in shock that it happened,” said longtime services district board member Kim Kraul about the need for a boil water advisory.

All but one director of the American Valley Community Services District board gathered around a table inside the Plumas County Library meeting room for what was not business as usual Thursday, June 13. Director Doug Eli was absent.

Foremost on everyone’s mind was recent vandalism to a spring line pipe that resulted in a state-mandated boil water advisory.

They were also focused on the results of test results that would tell them if the state would release the boil water advisory or whether it would continue. The advisory was for the West Zone of Quincy and not the East Zone.

It was the first time in the 30-year history of the services district in Quincy (then Quincy Community Services District) had a positive test for E.coli.

Together the men shared responsibilities in directing their staffs or personally handling the jobs that needed to be done.

What both men knew was that people in AVCSD’s West Zone had to be warned to boil their water one minute before drinking it.

Warning signs went up, drinking fountains were posted and bottled water became the norm, unless boiled.

Reverse 911 calls went out to all ratepayers in the West Zone beginning about 5 p.m. on June 5.

Sipe contacted restaurants and the hospital telling them to stop serving tap water and ice.

“We need to be brought up to speed as much as anybody else,” said AVCSD President Denny Churchill as he got the meeting underway.

Doohan explained to the board and two members of the audience how they discovered through routine testing that something wasn’t right with the drinking water.

On Monday, June 3, some of the Quincy area experienced a thunder and lightning storm that produced a downpour and hail. It’s believed that contaminants from the area entered a vandalized pipe employees later discovered.

Following state requirements, Doohan ordered more water samples taken and then started chlorinating the system. This is a standard practice that will eliminate bacterial problems.

Because of the design of the system it’s hard to get chlorine throughout the system, Assistant General Manager Mike Green explained to directors. But employees worked until all areas were reached.

Once the chlorine was pumped through the system, Green said the state told them to allow it to do its job through the weekend.

“We moved an ungodly amount of water through the system and then to get the chlorine through,” Green added.

The first set of samples taken after the chlorination process came back Wednesday, June 12, and they were all clean, Doohan said.

He was waiting for the final set of samples to be ready, get the state confirmation and then have the boil water advisory lifted that evening. Doohan said that everything the district has said about the situation has been orchestrated by the state. They have even prepared public statements.

A reverse 911 went out Thursday, June 13, notifying people they no longer had to boil the water before drinking it.

Administrative Assistant Katie Nunn said that it was difficult to notify everyone of the water problems. Phone messages go out to all ratepayers, but in some cases, the managers of apartments received the messages.

Nunn said they had a few difficulties getting managers to understand it was their responsibility to notify tenants. “If you’re a renter you can go online and get the alert,” she said.

She said that when people come to the office to sign up for water use as a homeowner or a renter that they’re told about signing up for alerts.

There’s also a way for individuals to sign up for any alerts from the district. Before the alert she said they had 15 people signed up and now they have 55.

Nunn said that anyone could go online and see what the district was recommending about the water.

Nunn said she didn’t know of another way to inform water users other than by knocking on doors. Director Bill Martin said he didn’t want to see AVCSD employees knocking on doors or posting notices; he wanted them out working to fix the problem.

Supervisor Lori Simpson, who was in the small audience, recommended that the district develop a Facebook page as a way to stay in touch with users.

(All of the latest information was disseminated through plumasnews.com as events unfolded.)

When AVCSD employees discovered the vandalized spring line pipe, Doohan said that the largest piece left intact was about the size of the back of his hand.

He said the way the system is designed and the type of PVC pipe they use should withstand a truck driving over it.

Green said they repaired the pipe but intend to replace it with reinforced ductile iron pipe. Doohan said it is far stronger.

Kroll asked what the cost to the district is? “We basically put back what we had,” Doohan said. And there was the cost of labor to the district, but its own employees did the work.

The new pipe will be expensive, Doohan said.

He added that he would run down all the costs for the directors.

If the incident had taken place in the fall, when water levels have naturally declined, Doohan said things would have been a lot worse.

Flanigan said that as a hospital director she was very grateful that the hospital was immediately notified of the alert. She was sent information immediately from her hospital source, copied it and delivered it to restaurants and taverns right along Main Street.

“We insure many water districts and you jumped on it as fast as you possibly could,” she said about her insurance company. Flanigan-Leavitt did receive the bid when AVCSD was newly forming last year.