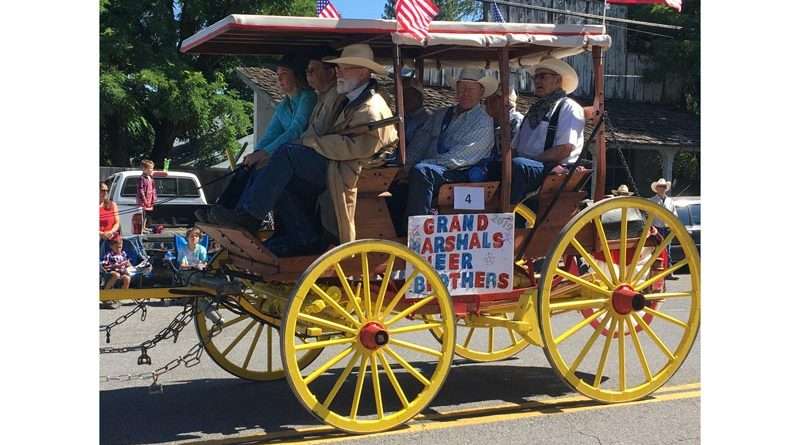 Hundreds of people packed into the tiny town of Taylorsville for the annual 4th of July parade. The historic parade is coupled with the 70th annual Silver Buckle Rodeo. Participants in the parade had long histories as well.

The grand marshal stagecoach entry carried the three Neer brothers — Charlie, Gary and Pete — who represented six generations of Indian Valley ranchers. “True to the Neer tradition, their kids and grandkids have followed in their footsteps and are found at many community events,” announced parade emcee Chad. Chad was assisted in keeping all the details straight by his wife, Jennifer, and Wesley Neer.

The “boys” rode in a stagecoach owned and operated by three generations of the Hardgrave family. Back in the day, the stage transported folks and freight between Greenville and Beckwourth from 1872 through 1910. The trip was a 12-hour long journey and cost $6 each way.

In the Taylorsville parade, the Grand Marshal Neers were joined by Jim Hamblin, whose grandfather built the stage coach in Taylorsville. Hamblin is notable himself serving one of the longest careers ever in the U.S. armed forces from 1948 to 2018. The stagecoach also carried Terry Schwartz riding “shotgun,” stage driver Shasta Banchio and her grandfather Rick Maness.

The stagecoach is in the process of being restored by Indian Valley Museum members and has taken four years, so far.

The first-place award for a walking group went to the Stone Ranch Rangers who celebrated a 49-year reunion as they have been gathering friends and family at the Genesee Stone Ranch since 1970. Their circus theme was a hit with the crowd and the judges.

The crowd remained on the street even after the parade ended around 11 a.m. Young’s Market was packed with customers as was Hansen’s Home-Baked Pies. “The pear lemon pie was amazing,” said one patron. Well-behaved, groomed and decorated pups rested in the shade while strange hands reached out for a pet.

Folks made their way past the 52nd annual “Cowboy Breakfast” at the Gem and Mineral Museum. Volunteers from Mt. Jura Gem and Mineral Society were busy serving up ham and eggs with stacks of pancakes to raise funds to support the museum.

Just a stroll from town toward the Taylorsville Campground folks were taking a dip to cool off in Indian Creek. A little further on down the road, the 70th Taylorsville 4th of July Rodeo was getting underway.

The pre-rodeo show featured young wranglers, ages 7 and up, with a dummy roping event. It kept folks entertained while settling into the bleachers and kept the focus off the heat.

The tri-tip barbeque took over from there as a terrific distraction. Fully loaded hot dogs and stacks of ice-cold canned drinks came with patrons as they filled the stands. People filled the bleachers in sunshine, but were covered in shade by the time the rodeo events began at 1 p.m.

The big California Cowboys Pro Rodeo Association event drew a full crowd and started with a touching recorded speech from John Wayne followed by a dramatic entrance of the flag and equally inspiring rendition of the “Star Spangled Banner.” Even cowboys’ eyes got a little moist.