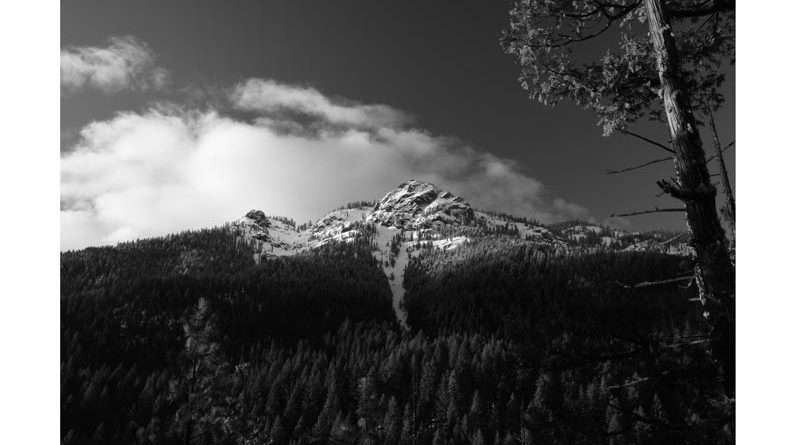 Taylorsville photographer David Willis has his photography on display at Patti’s Thunder Café in Quincy through the end of September.

For the sunny summer months he chose to bring photographs from the wintry months to balance the temperatures and remind us of the balance of the seasons. He has also included lush images of the flora found alongside of our rivers and streams as well as iconic valley scenes.

Willis is a multi-talented artist, musician, chef, social justice champion and general chameleon of a human being who resides in a magical, mystical place known as Indian Valley on a small plot of land with his wife Laura. He works out of their home from a one-room studio he has assembled hidden amongst the oak, pine and fir.

He grew up in nature. As a child, he lived in many different small towns in Northern California, including Quincy and Blairsden, returning to Plumas County in 1989 where he has lived ever since.

His journey as a photographer began with the loan of an instamatic 110 camera from his third-grade teacher as part of a field trip to San Francisco. Willis was fascinated with the unexpected delight he found in capturing images of the wonderful variety of subjects he encountered on that trip. Thus began his life long relationship with photography. He bought his first 35 mm camera at the age of 13 and has been making photographs ever since.

With his images Willis hopes to share the peace, tranquility and inspiration he has found from having spent most of his life surrounded by the natural world and closely observing its raw, elemental ever-changing forms. He endeavors to capture the subtle, hidden, impermanent beauty of the landscapes that continue to captivate him.

Utilizing his unique perspective, an understanding of light, traditional photographic techniques and modern digital equipment, he diligently explores the place he calls home to bring you enduring images of the “Lost Sierra” and beyond that hopes will delight, inspire and enthrall.

Plumas Arts coordinates art displays at Patti’s Thunder Café, 557 Lawrence St. To learn more about all the many programs and projects brought to you by Plumas Arts, visit www.plumasarts.org, stop by the Plumas arts Gallery at 525 Main St., or call 283-3402.