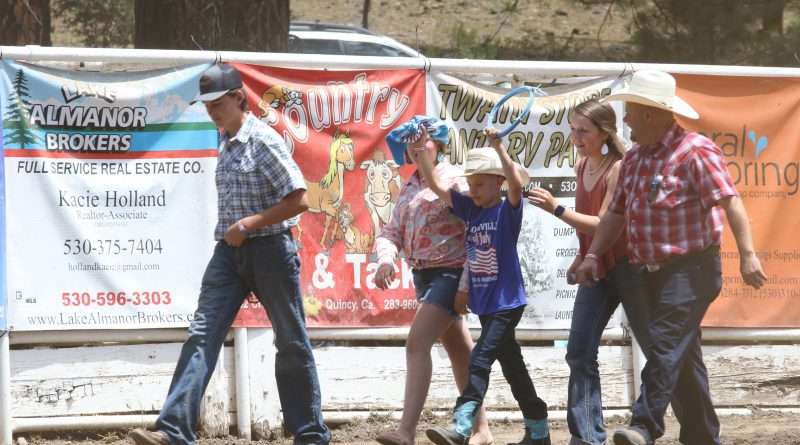 The Fourth of July was predicted to be a very hot day, but folks came out in the hundreds to attend  festivities in Taylorsville that culminated with a big ol’ fashioned rodeo.

Lacie Banchio, a Greenville High School 2021 graduate, is the new Silver Buckle Rodeo Queen. Thanks went out to “… the Indian Valley Riding & Roping Club for putting on such a great week and the rodeo,” said Queen Banchio. “As well as the Indian Valley 4-H club and rock club putting on the pancake breakfast, and Suzzette (Reed) for putting on the parade. Thank you to everyone who helped put on something so memorable and for keeping the tradition alive. God Bless America and God Bless our Small Town.”

The event is a long tradition in Plumas County and with restrictions lightened up, rodeo fans showed up in droves. Red, white and blue hats, bandanas, shirts, umbrellas and more filled the stadium as nary a seat remained empty when the fun began.

The 72nd Annual Taylorsville 4th of July Silver Buckle Rodeo hosted by the Indian Valley Riding & Roping Club, established in 1949, opened in its usual manner: a patriotic speech from announcer Dan Fowlie followed by a tear-jerking dash of a ride with the American flag waving briskly around the arena. It gets me every time. Crowd participation was high as Taylorsville local, Laura Kern, sang the National Anthem.

Another heart-opener followed: youngsters weighing 50 pounds and under competed in “Mutton Busting.” The first place Mutton Buster (holding on the longest) was Caden Neer of Sparks, NV. “He wasn’t supposed to ride and his mom ran home to get clothes,” said Caden’s cousin, Shelley Neer. The second longest “rider” was Kinsley Bloxham of Taylorsville. Hunter Hall of Quincy was asked if he was going to compete in the Mutton Busting as he came in the gate with his Aunt, Katie Olivera. Hunter jumped at the chance, and after permission was received from his mother, he was added to the competition. “It was his first rodeo experience,” said Olivera. “He had a blast and was so excited to compete … His favorite part of the rodeo was watching the bull riders and barrel racing.”

“Misty (Lacie’s mom) and I wanted to thank everybody who came out for the ropings, the pancake breakfast, parade and the Silver Buckle Rodeo,” said 2021 Rodeo Queen Lacie Banchio. “It was nice to see our small valley have full stands and downtown Taylorsville full of proud Americans.”

Junior rodeo takes place in Taylorsville Wednesday, July 23. The event starts with Barrels and Steer Riding at 5 p.m. Friday night. Grand Entry and all other events to follow start Saturday, July 24, beginning at 8 a.m. Entry deadline is Thursday, July 10 and it limited to 100 contestants. For more information on the Junior Rodeo, TEXT Veronica Tilton 258-1550.