A Quincy High School teen and her mother joined forces with the Plumas County Public Health Agency’s Tobacco Use Reduction Program’s Ruben Lopez and the Public Health Agency’s Youth Development Program’s Danielle Blust in a cigarette butt clean-up day last month at Gansner Park. The enthusiastic group ignored the heat in collecting over 92 butts for the day.  Simone Smith, with the help of her mother, Donata Smith, combed the lawns and bushes looking for these small yet harmful bits of toxic waste carelessly tossed aside.

In 2005, an estimated 135 million pounds of cigarette butts were dumped into the U.S. environment. Cigarette butts are the most common toxic waste found in cleanups and the number one item found on California highways. And contrary to popular belief, they do not decompose completely.

Worldwide, it is estimated that 1.69 billion pounds of cigarette butts end up as waste each year. A study conducted by the California Department of Transportation found that cigarette butts make up 34 percent of the total waste captured in California.

The production of cigarettes is very damaging to the environment. It is estimated that one tree is consumed for every 300 cigarettes produced – that’s one tree for every one and a half cartons.

Smoking poses a direct threat to our forests, homes and parks.12 Discarded cigarette butts have been linked to large wildfires, resulting in the destruction of wildlife, vegetation and property. Cigarette-induced fires claim hundreds of lives in California each year, not to mention the millions of dollars in property damage.

California spends $41 million annually on waste clean-up. Cigarette butts make up 34 percent of the total waste captured in California. A 2009 study on the impact of tobacco waste in San Francisco streets found that tobacco waste accounted for 25 percent of all litter. It was estimated that cigarette butt waste clean-up costs San Francisco approximately $7.4 million annually. Soon after the results were released, San Francisco enacted a cigarette clean up fee which is used to cleanup butts from streets, tourist venues and storm drains.

There is help available for those who want to quit. The California Smokers’ Helpline has been helping people quit smoking for more than 25 years. The Helpline’s caring counselors are ready to help develop a personalized quit plan that’s right for you. There’s lots of way to connect – visit www.nobutt.org, call 1-800-NO-BUTTS or http://www.novapes.orgor 1-844-8-NO-VAPE.

The infographic below helps explain how toxic cigarette butts are: 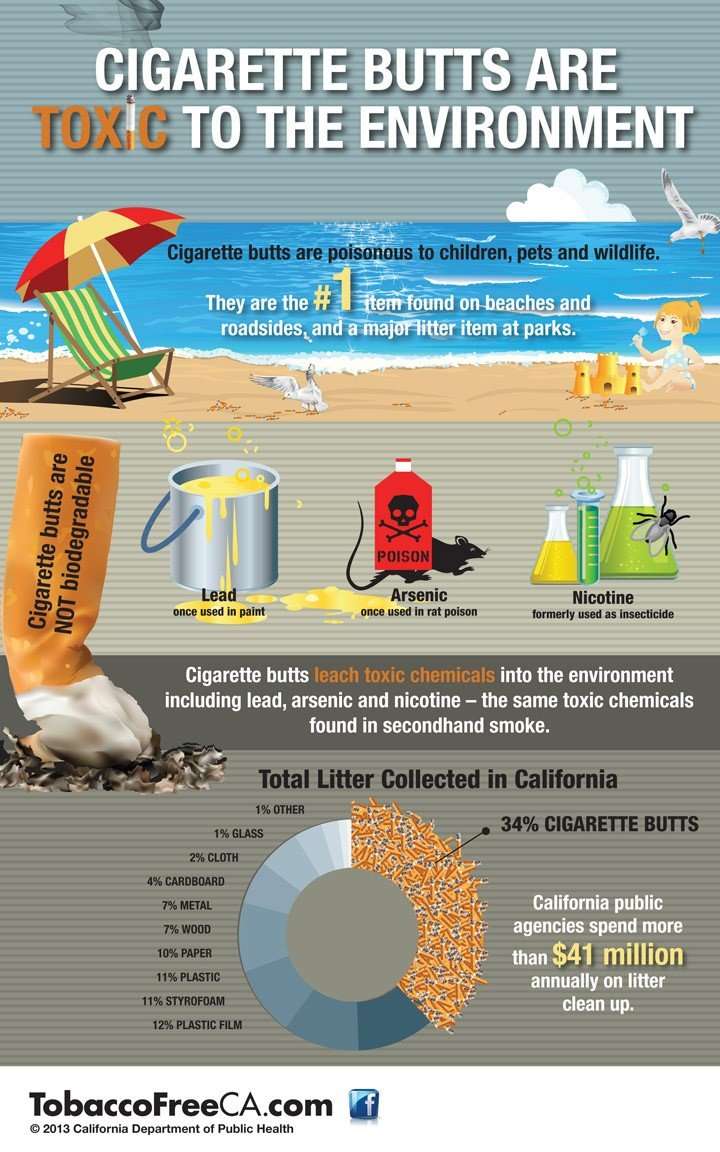